Environment of the game

The Trench takes place on only one map composed of two trenches: a French and a German one separated by No Man’s Land and its surrounding area comprising of forests and villages.
Trenches are made of three lines connected by narrow communication galleries.
You will find shelters, first aid posts, command posts, saps and so on.

This environment is bound to climatic conditions (rain, snow, and storms) as well as the cycle of day and night.

Different ways of approaching the battle

One of the main mechanics is that the game begins 3 days before the German assault on the 21st February 1916. These 3 days will always take place on the same map Firstly, this time will allow you to prepare for the future German assaults. You can request a 75 field gun battery on a precise zone, air support, “coups de main” in the German trench, position foot soldiers in strategic places and more, these 3 days will allow you to approach the battle from a different angle and prepare yourself against the future German attack. This offers the player an important level of replayability.

At the beginning of the development The Trench was 50% FPS / 50% RPG. The Trench is now mainly a FPS with a small part of RPG. The realistic mode is still there, it is now included in the 4 choices of difficulty (easy, normal, realistic and customized mode). The ability to infiltrate and cover will be developed as part of the FPS mode.

The RPG element of this game involves an inventory system to store your items, Being able to communicate with NPC’s and also secondary missions, characteristics for the equipment as well as the customization of some weapons , for example : adding an APX scope to the Lebel, Placement of Filloux cannons etc..

Support the war effort ! They shall not pass ! 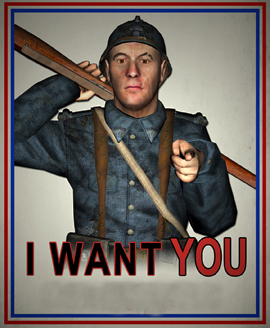 You can support the development of the game, Pre-order it now and you will receive a 30% reduction in price.
Post article RSS Articles

The first minutes of gameplay.

The information contained in this FAQ reflects the current state of development of THE TRENCH. It should be noted that the items listed are likely to...

The first gameplay video of the trench representing a tiny part of the tutorial. Let's see the gameplay with the Lebel Model 1886 rifle and functioning...

what happened with the game?

They haven't updated their indiedb page in a long time but they still post updates regularly on twitter. even hosted a twitch stream yesterday. it's all in french though. Twitter.com

On Saturday, June 5, at 15:00, the description of the game and a video from the first episode will be broadcast live.Those who want to follow and watch should follow the game's twitch account.
Twitch.tv

I think this time this game will be released.This year for sure.You can follow the game updates here Twitter.com

Believe this game will not come out.Eight years have passed.I think the owner of this project makes fun of people.Don't wait for nothing.Presumably after a few months.They explain.Our game is coming out at 2020.Next year next year next year.
This goes on like this.

I think Bannerlord will come out first. :'(

Indie
Tags
Embed Buttons
Link to THE TRENCH by selecting a button and using the embed code provided more...