Our first project is called The Slurping Dead. Obviously not the most innovative setting, but since our main goal was familiarizing ourselves with the production cycle of game making, we wanted to keep it simple. And save our precious, astounding ideas for later works.

The Slurping Dead is an isometric action game in which the player has to fight against a growing horde of zombies in order to escape or die trying. The player’s only weapon is a laser-pimped crossbow with three types of bolts:

Every normal bolt may be used again, at least if you are brave enough to cross a zombie horde and pick it up… Speaking of which: Sometimes, zombies may carry useful items they will drop, like chemicals, which you can then combine with a normal bolt to craft a new explosive bolt. But beware… once dead (read: really dead) the zombies dissolve by releasing poisonous fumes for a while, so getting the loot might be dangerous.

If you’re lucky, you may even find some food to restore part of your health. If not, sooner or later, you will run out of energy and die, meaning it would be wise to escape the horde in time. But in the backyard level, a huge iron gate blocks your way to freedom. And guess who has the keycode in his pocket? That’s right… your lovely next-door zombie. So searching through the loot is important. Once the gate is open, you can escape and “win” the level. Of course you can stay and slay a few more… just for the points in the global highscore list. You can even try to find the keys to the waiting car…

Three weeks ago, we decided our next goal. We wanted to release a playable demo version of the game by mid January. We hope to gather some feedback for further improvements. We think that external views on the project will give us new perspectives. Finally the big day has arrived and with a lot of sweat on our brow we release the gameplay demo of The Slurping Dead, which you can download here. You can play it either with mouse and keyboard or with the XBox controller.

Regarding building the demo, everything went fine until we updated our version of Unity a few days ago. In hindsight, not the smartest move with some kind of release on the horizon. We had bad luck and now sometimes the GUI is doing weired stuff as you can see in the screenshot: 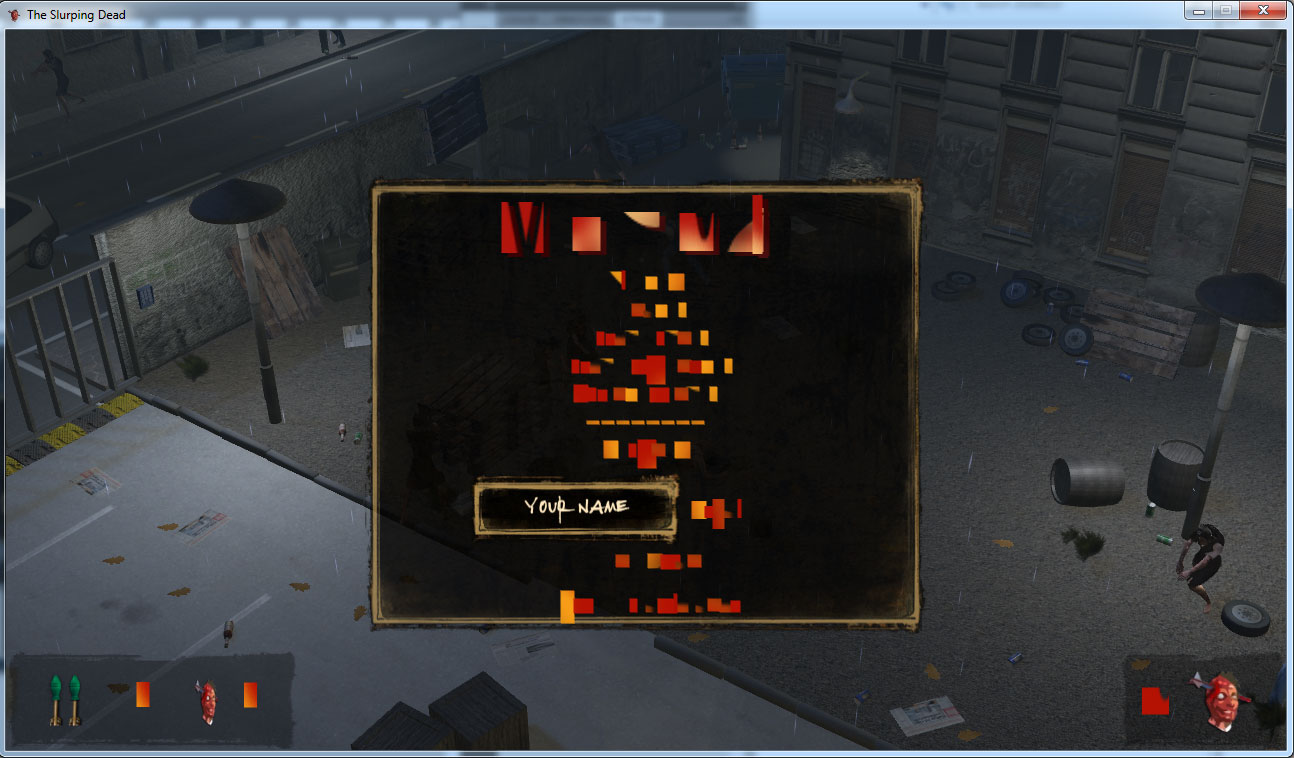 But for the last days, working on our Backyard level, I was able to remove most of the (known) bugs and tweak the gameplay, so that the demo will hopefully be enjoyable. I increased the speed of the player and the zombies. A little modification to the AI now distributes the zombies more evenly throughout the level. The weather also notices the player's pain now and starts to cry when he gets hurt.
The explosion bolt no longer explodes on impact but triggers a timer instead. Now the player has to think a bit more about how and when to use these bolts. Also the damage of the explosion changed. Until recently, the player took no harm from an explosion. That is fixed now and for better feedback (and for the cool looks), I added two more animations for that kind of damage:

On the graphical side, I tried to make the level a bit more alive and not so clean like before. So I handplaced (yes, there is love in this game) a few items like bottles, leaves and old newspapers. I think this adds a lot to the atmosphere and we will improve on that for sure. Here you can see a before and after, what do you think? After finishing the installer for the demo, Moritz now continues to work on the Supermarket level which is looking very nice so far. Only the shelves need a bit of restocking. We learned the hard way how stupid the decision for a supermarket setting was. Naturally, it is the one place on earth having the highest density of different products. All waiting to be modelled... well, let's call it a good exercise. ;) 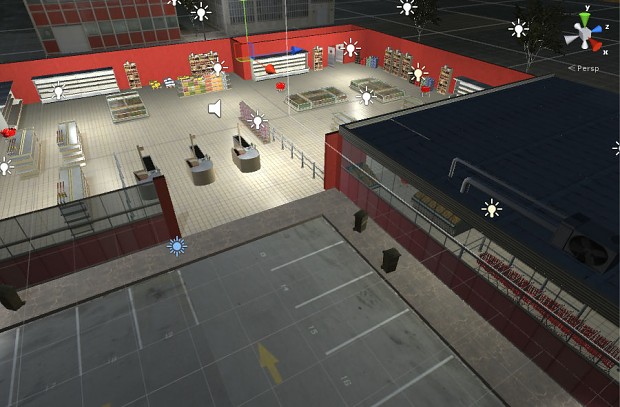 We first tried to model every product on its own, but after a short while we chose the more sane approach of billboarding. Firstly, the workload would have been horribly high and secondly, we just don't need so much detail having the camera that far away. Nevertheless, we made some singular models for special products so that the content of the shelves doesn't look too flat. We also hope to create a bit of depth using normal maps.

Regarding texturing, we first used some photos of real life products but to avoid any copyright infringement, we decided to design our own brands. Another bold move... we thought it wouldn't take more than a few hours. Needless to say: it did! :) Furtunately, there are a few databases with images for free use. We also found nice fonts for our purpose. Most of the textures have been finished by now: 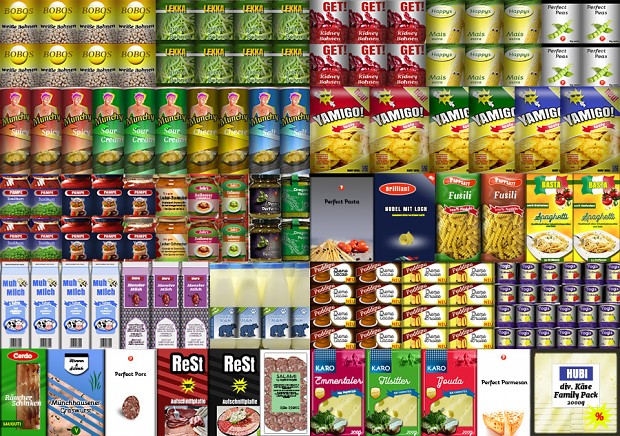 Last but not least, we made contact with a very experienced composer, with whom we're now discussing adding music to the game. We hadn't given much thought to it, but that's the beauty of working with other people who are very talented: you just get brilliant input on how to improve your game you wouldn't have thought of yourself.

We hope that you will enjoy the demo and tell us what you think. We want to improve on the current version as much as we can. Like always, we're looking forward to seeing your comments below!

Happy New Year! Just in time, we finished our first gameplay video of The Slurping Dead.

New devs on the blog

Having started making a game a few months ago, we thought it was about time to introduce ourselves and our game to this community.

This is the second demo version of The Slurping Dead. It now contains the complete supermarket level and features enhanced graphics.

We are happy to release our first playable gameplay demo. Please note that this is an early alpha version, so sureley it contains a few bugs. If you find...

Hi, thank you for your interest, there is no download yet, we are currently working on a few evil bugs. After that we will make a small gameplay video and put a first version to download online. I think it will take two more weeks until then.