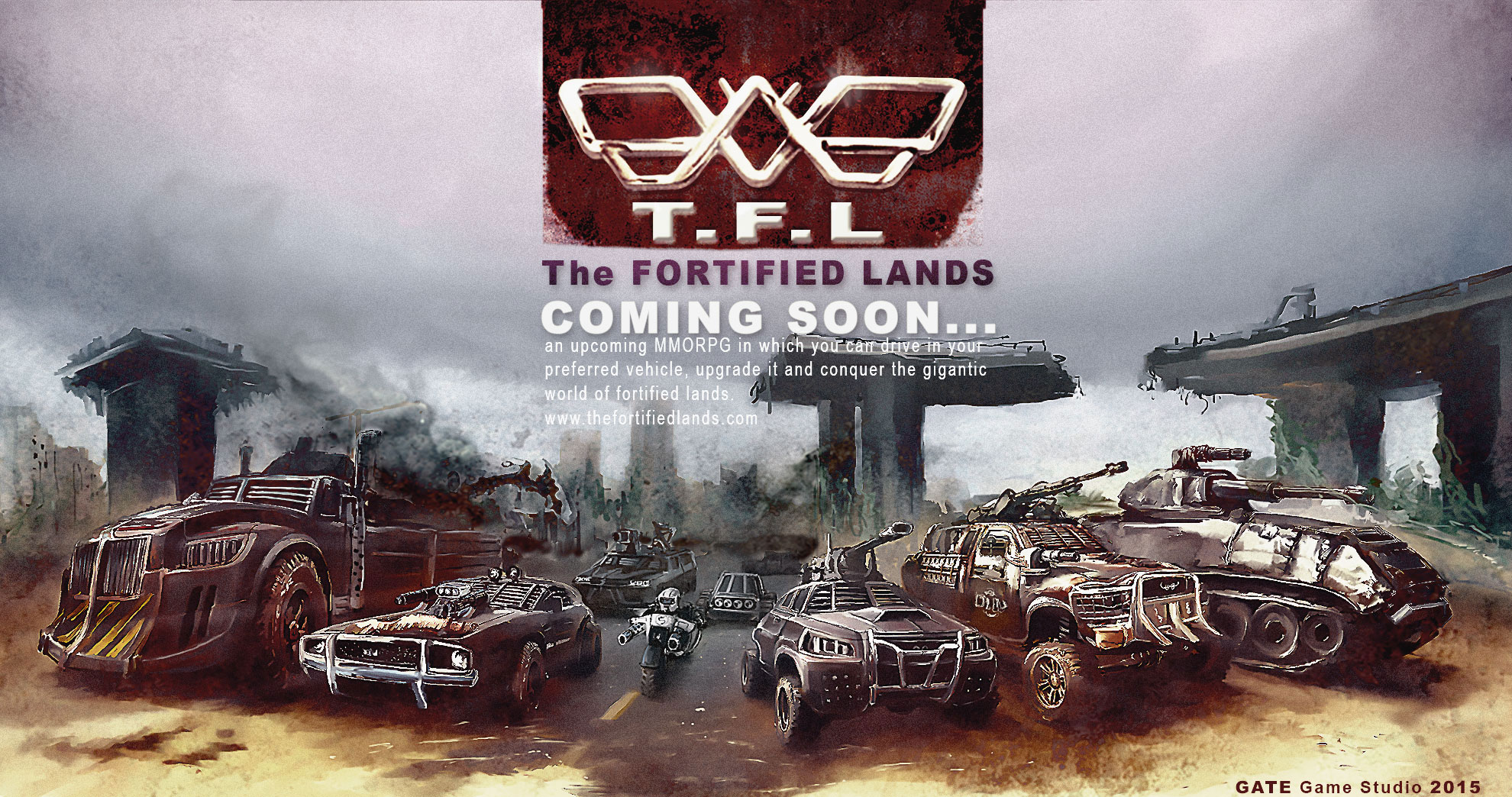 What is the Fortified Lands ?

The Fortified Lands is a massively multiplayer online role-playing game, which is currently under development. In TFL, players from all around the world connect to a virtual world that awaits them with endless adventures, mysterious places and an enormous number of creatures, races, factions and cities.
Players in this gigantic virtual world play as a human character who is looking to find a way to save his/her home and peoples. To do this, they need to control a vehicle, arm it with different kind of weapons and armors, upgrade it to a war machine and fight with dangerous and wild creatures of all type.

TFL is a MMORPG

MMORPG, which stands for ‘Massively Multiplayer Online Role-Playing Game’, is a game genre which can have thousands of players in same world with live interacting each other. Because of that, an MMO Game does not have an offline mode and players need to connect to the internet while play.
In TFL, each player controls a unique character and number of vehicles. While game can be played solo, there are lot of events, battlefields, combat zones and activities which players will need a group or clan to explore and complete.

The Fortified Land is set in post-apocalypse world, about 26th century, decades after the end of the “Great War” between humans and betrayed Machines and robots which are made by the people.
The Earth is destroyed and effects of nuclear, bio-logical, chemical, plasma and other type of mass killing bombs that during the war are used, are remaining everywhere, cities are destroyed and left uninhabitable, water is bacterial and treated with radioactive, most of people, animals and insects are mutated by biological diseases and turn into wild wonder monsters.

TFL has a realistic weather system which has real time day and night cylcling system as well as sessional weather conditions and is integrated with world, creatures and cities. For example some cities might be closed during mid-nights.

In The Fortified Lands, each vehicle has a specific performance, engine setup and drive simulation that define the player’s role and offers a vastly different gameplay experience. For example each vehicle has its own limits about which weapons and armors can be attached to, therefore, they can access to different type of combat skills, this will define if the player vehicle is a protector, damage dealer or a defender.
Beside the above explanation about players vehicles and combat roles, a player with his/her character can explore the world and pick various type of missions, quests and paths which effect the game play, such as unlocking rare and unique events, weapons, armors and …

The world of TFL is massively large, where filled with many mysterious and secret paths and hidden contents for those players who like to explore everywhere. Some of them are solo able some need a team!
Players can track missions, cities, creatures, NPC (computer-controlled characters) and signs on their vehicle's radar. But there are some hidden contents that are not visible normally in the radars! And can only be found in a specific and certain time, date or situation.
Players will encounter thousands of missions which will require extra activities to be done, from a simple item delivery to a heroic creature boss distortion for example. Completing missions have grateful rewards and unlocks game play contents.
These missions will force players to fight against deadly monsters and creatures. Players will be able to deal with most situations they encounter alone, but there are true challenges and the rewards await in many combat zones, which can only be conquered by groups of players working together as a team.

TFL has different PVP experiences, such as world and battlefields.
Watch out and be careful when you are exploring outdoors! The world is too dangerous, other players may lock their targets on you! TFL is an open world PVP, where players can attack to other players at any time.
Besides that, TLF offers various type of PVP games which are running inside of specific battlefields. Where a team of players need to complete an action before the other team and stand longer before all of other team’s member die.
Winning a battlefield awards PVP ranks, Items, currency and unlocks game play contents .

Players can learn several none-combat skills such as professions, communication skills, exploration skills and …
Players with a profession skill can use raw materials and create weapons, armors, bullets, ammos, combat accessories, repair kits and even more, then they can sell what they have made to other players or use them.
They can trade with each other, become friend, group or make clans. Clans can make a city and control it. They can pick a preferred zone and establish their own city! Hire members to improve the city with their skills. But remember! Any time even if you are offline or in sleep, a wild group of players or creatures might begin fire on your city! That’s why you need keep upgrade your city and hire guards and protectors to defend and defeat them .

To promote The Fortified Lands and grow its popularity (top games), use the embed code provided on your homepage, blog, forums and elsewhere you desire. Or try our widget.

Virtuverse is building a platform that is going to change online gaming; providing rich gaming experiences across multiple genres of gameplay. Operating...

Polyverse is an Open Source Online RPG where you can play as the Game Master. It will be available as fully open source software, including client, server...

Ark Of Nephilim is Dark Form Entertainment's MMORPG that has been under development for about a year now. Ark Of Nephilim takes place 25 years after Desolation...

The Saga of Ryzom

BEWARE! Beware the world of Atys, although seemingly calm and serene, is being attacked by horrific Kitins. These powerful, mutated arachnids are swarming...

[IN SEARCH OF A NEW WORLD] Numerous Species fight for their survival in the vast universe. The most powerful two of them, Acron and Bellico are caught...