A sword and sorcery adventure where your magic shapes the world. A Classical rogue-like with a modern feel. A challenging game with clear goals and important tactical decisions. A deep experience that's easy to use.

"The Curse of Yendor" is a classical roguelike with modern interface and pixel graphics. Its core concepts are complex tactical combat, mini-quests, and terrain deformation.

Your nemesis has found the Amulet of Yendor...Defeat him before he ascends to Godhood!

(It's a twist on the classic rogue-like story-line.)

Use your magic to alter the terrain: Dig through walls, burn trees, freeze rivers, and cause earthquakes!

All maps are procedurally generated, and can contain various environmental puzzles, gate/lever combinations, or sokoban constructs.

Layouts are designed based on the fact that the player can manipulate the environment. With your ice magic, you can freeze water, lava, and acid. With fireball, you can set whole forests ablaze and burn them down to ash. With earthquake, you can crumble all but the most solid walls to rubble.

Many useful items are hidden within walls, or on secluded islands. It pays to explore!

Combat amounts to "finding the right tool for the job". Every kind of adversary has some sort of special powers, resistances, and vulnerabilities.

Your weapons do one of three damage types: edged, blunt, and piercing. There are three elemental schools of magic: fire, ice, and stone. There are three spiritual alignments: light, dark, and gray. There are even three possible 'auras' that a creature or weapon can have: blue, red, and yellow.

So what is the best approach when encountering a blue stone elemental? Normally weak to ice, the blue aura makes it resistant. Attacking it with a sword might damage the blade's edge. Since stone elementals are weak to blunt damage, maybe your mace is the best choice? Or could that rare yellow crossbow do the most damage, since yellow weapons hurt red creatures?

All character classes and alignments can cast three spells: Ice-Bolt , Fireball , and Earthquake. Each spell has a different effect on the environment.

Ice-Bolt can freeze various liquids, and put out fires. Fireball starts fires, and explodes in a large radius, with the potential to burn entire forests. Earthquake can damage walls, scatter debris, and even destroy some valuable items!

According to your alignment, you also get one additional spell:

Light characters receive Greater Healing which fully restores health and removes all negative status effects, such as poison and blindness.

Dark characters have the spell Beam of Death, a penetrating directional attack that will instantly kill almost any creatures in its path.

Gray characters get Gray Wind, a spell that effects a large radius around the player. It breaks walls, freezes water, and pushes monsters far away.

Each of these 'alignment' spells starts with a mana cost of 5 (which is high), and the cost increases every time you use it.

A sword and sorcery adventure where your magic shapes the world. A Classical rogue-like with a modern feel. A challenging game with clear goals and important tactical decisions. The Curse of Yendor launches on Steam 02/17/17. 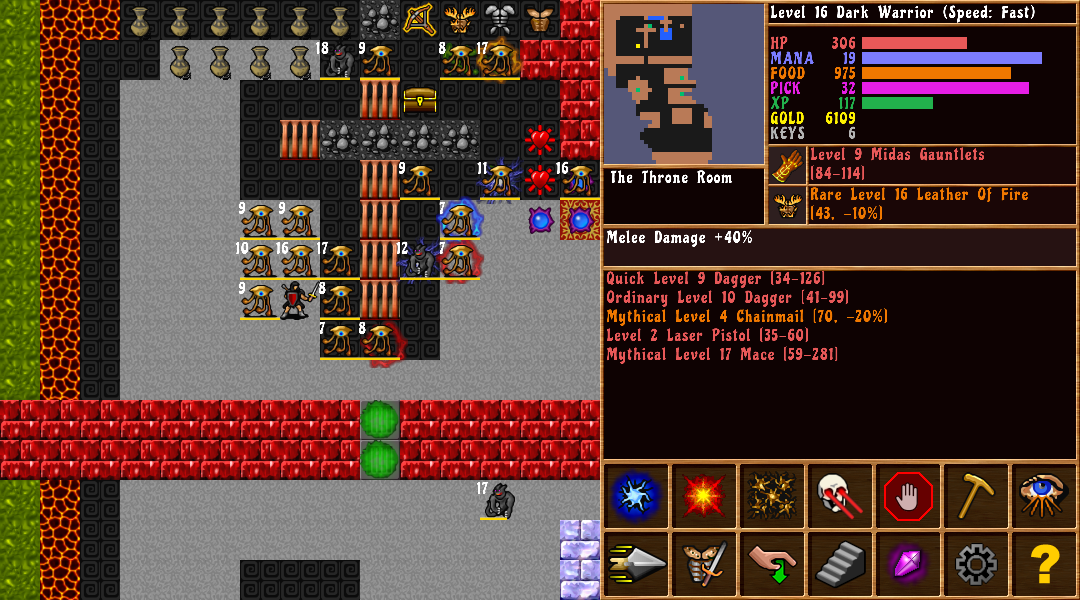 Above is a view of the throne room, where the (supposedly?) final encounter takes place. Our hero is surrounded by self-replicating floating eyes, and really wants that enchanted weapon up at the top. 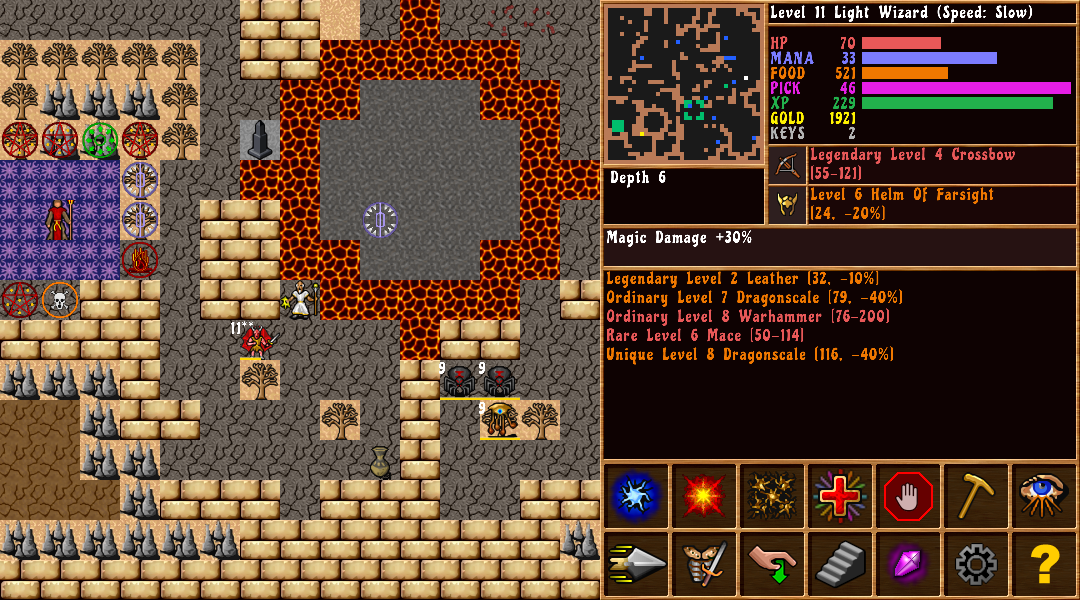 And this light wizard is about to be killed by that massive demon, no matter what he does. He doesn't need to worry about those poison spiders, and he'll never make it to the merchant on the blue carpet.

While gameplay and balance has undergone a great deal of tweaking lately, the most obvious change to the game is the subtle, haunting dark ambient soundtrack by Sum Over Paths. You can listen to the music here , or check out these two tracks right now:

Back in 2015 when I was working on a space real time strategy game, I came across a youtuber called "Sabouts". His name derives from being Serious about Strategy, and he is. He plays lots of indie games, as well as the big names, and he always plays on the harder difficulties!

Sabouts has started a series on The Curse of Yendor, and here's the first video:

And while I am not a youtube personality, you can learn a lot about the game from this "developer let's play" video I made:

Two new sources of information are available for the game: the first is a Vlambeer-style presskit courtesy of IndieDB, and second is a Steam Guide, written by the developer, to address some of the major workings of the game.

This free beta demo was release for the "Annual Roguelike Release Party", September 18th 2016. It is identical to the actual game, except it stops after...

Indie
Twitter
Tags
Embed Buttons
Link to The Curse Of Yendor by selecting a button and using the embed code provided more...