Prehistory to the plot

The Soviet government decided to organize the storage of nuclear waste in the depths of Siberia. First shipment of nuclear waste train was scheduled for January 1983. Scientist Vasily Epstein is working on a psychoactive substance PVSNS -80 ( Psychoactive substance stimulating the nervous system), which should improve the human. He agrees to send the wagon with its matter with nuclear waste, ostensibly to another laboratory for testing near Siberia. January 26, 1983 with the composition of 10 wagons of nuclear waste and one carriage with the substance sent to Siberia. Near the town Uyar, technogenic accident occurs, the train goes off the rails with nuclear waste and psychoactive substance PVSNS - 80. The Soviet government immediately cut off the area from the rest of the world in order to hide the incident. They turned off the phone, close all the ins and outs of the area. Appears exclusion zone. It was clear that the accident is dangerous, it was even more dangerous because the substance PVSNS -80 interacts with nuclear. Epstein Vasily went to the zone and for the whole world he is now considered lost. For five years in the area were sent several military convoys to explore, learn, solve the problem and find Epstein, but all these convoys were gone. In the Siberian exclusion zone unrealistic terrible things happen.


The government remains one hope. This is retired KGB agent - Albert B. Sidorov at age 63. 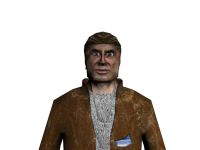 He always performed the most difficult job that others can not afford, and he was always glad to go into the inferno. We can say that he saved government's ass. Order of the Central Committee, he was sent to the area to try to get as much information as possible to find a scientist Epstein, and learn what happened with military convoys. September 29, 1988 Albert B. Sidorov comes into the zone. And here begins your story.

Solving tasks in the game you will not be bored. Gameplay combines such genres as a shooter (in the style of GTA), strategy, survival, tower defense. Oh, how would it all right now describe. :-) Investigate the area you can walk or use transport, you will be on hand to open the whole research area with their secrets and his history. And a great abundance of different types of transport. In the area inhabited by very interesting mutants as they were mutated not only under the influence of the nuclear reaction, but also under the influence of an experimental drug (believe it is a very interesting sight). Skirmishes in the game turn out great. Yes, it's an open world, so all of his "chips" will be present. Imagine only: to kill a handful of mutants from another weapon, or throw them all away. It is entirely your choice. Vehicle in the complement the second component of the game. This is strategy. Upon arrival to the exclusion zone, you will be offered an entire village for the construction (there were some survivors in the area, thanks to produce an antidote to one of the residents). In the village you will be able to design new vehicle with different characteristics, the new weapons, produce resources, work on improving the existing arsenal and transport. And much more . 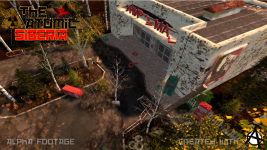 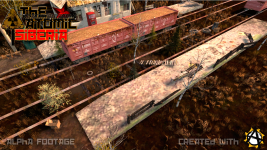 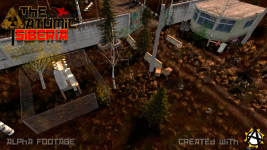 And for this you will need to produce a variety of resources in the area. Their transportation carried out by means of different techniques. Here and connects survival genre. For example you need to get in the zone: food, fuel, wood and so on. And at the same time your village can be attacked by mutants, so you will need to defend it. You have to defend the village in "tower defense" style. In the exclusion zone will certainly artifacts that can improve weapons and vehicle by very interesting effects. And beware area is very unstable. Oh yeah everything else you will have a complete storyline, which in our opinion is interesting.

We also plan to add a few arcade modes to just have fun with mutants and vehicle physics.

We will update the information and will soon show you already gameplay.

And really sorry for bad English, some part of text translated with translate.google.com :-)

Read on other site:

Some information about game:
- big open dangerous world, which you can explore and try survive.
- gameplay combines such genres like action(gta - style), survive, strategy.
- it is all created with powerfull engine Project Anarchy! So in game uses Havok Behavior, Havok Physics, Havok AI.

New game for Android and IOS coming soon. Gameplay combines such genres as a shooter (in the style of GTA), strategy, survival, tower defense. With the...