The Adventure Pals is an epic adventure platformer fuelled by imagination. Enter a gorgeous & hilarious world in a game about friendship, exploration & riding giraffes. Inspired by such titles as Adventure Time, Castle Crashers, Zelda 2 & Banjo Kazooie

Take on the role of a young adventurer as you travel the land and battle monsters-a-plenty in an epic quest to stop the evil Mr B who has kidnapped your Papa and is hell-bent on turning him into a delicious hot dog. But fear not, for you are not alone; you have the help of your best friends, Sparkles the giraffe and your pet rock!

Ride your giraffe across the world map, discovering secrets, bashing up baddies and entering a hilarious and colourful world of adventure where using a giraffe’s tongue as a helicopter propeller is a legitimate means of transport.

Level up along the way for new weapons, stats and hat colours, fight a wide range of enemies and defeat Mr. B in a number of epic boss fights. Interact with unforgettable characters and visit the shop to stock up on equipment and buy new special abilities. See the Blacksmith outside the arena for powerful weapon mods and replay levels for diamonds which can be used to purchase unique special abilities and buffs.

Visually the game draws inspiration from cartoons such as Adventure Time and Gravity Falls, aiming for a bright and engaging aesthetic everyone can enjoy. The gameplay may remind you of a mashup of some classic 2D and 3D platforming games such as Zelda 2 and Banjo Kazooie. We’ve also added modern mechanics and fresh ideas to reinvigorate these genres for a brand spanking new adventure.

We have 3 days left on our Kickstarter campaign for The Adventure Pals! Its currently sitting at 87%, with your help we can reach our goal and make the game a reality. If you played the demo and enjoyed it, please consider pledging and help us over the finish line. We have some super cool rewards available which we think you’ll love! 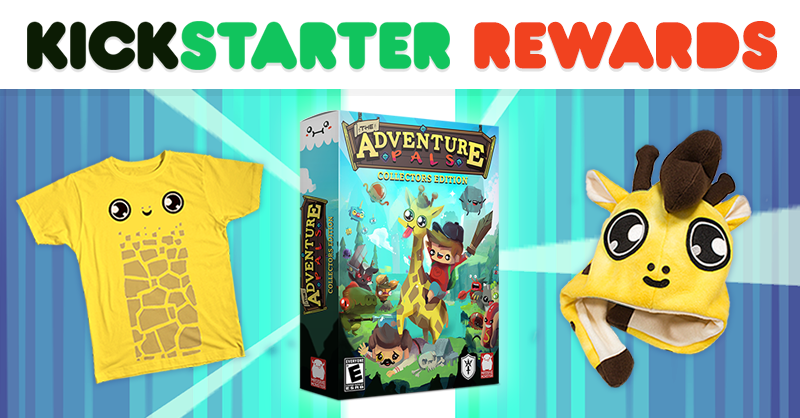 We’ve created a thunderclap for the final day of The Adventure Pals! Thunderclap allows us to use the power of our fans to help boost our message. The thunderclap will go out on the last day of our Kickstarter campaign, and get as many people as possible talking about the game all at once. You can simply sign up here and commit to posting our message on your preferred outlet.

Dan from The Diamond Minecart has done a playthrough of The Adventure Pals demo! We are big fans of his videos here at Massive Monster and very excited that he enjoyed the game so much!

The Adventure Pals - Play our demo!

Updates from the pals, on our trek to Kickstarter Success & our brand new shiny demo!

We've launched a Kickstarter for the game and we'd for you to check it out.

The Adventure Pals Demo! Please Note If you enjoy the game please consider backing us on Kickstarter we really need your help to be able to make this...

Twitter
Tags
Embed Buttons
Link to The Adventure Pals by selecting a button and using the embed code provided more...