Pirates of New Horizons is an Action Adventure/3D Jump'n Run about looting, pillaging and throwing cats - designed for your mobile device. You can currently play two levels for free in our preview version our website: www.piratesofnewhorizons.com

Embark on a swashbucklin' cruise on your flying pirate ship: 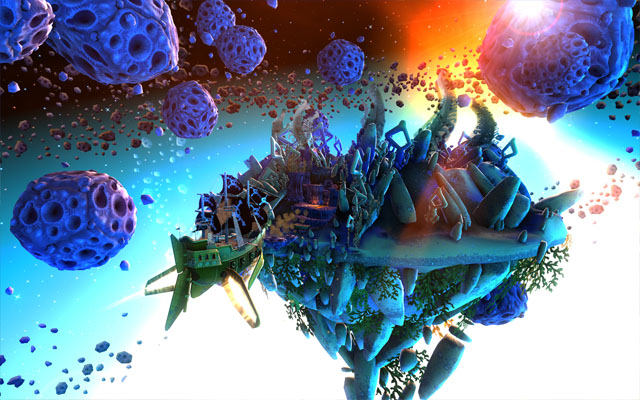 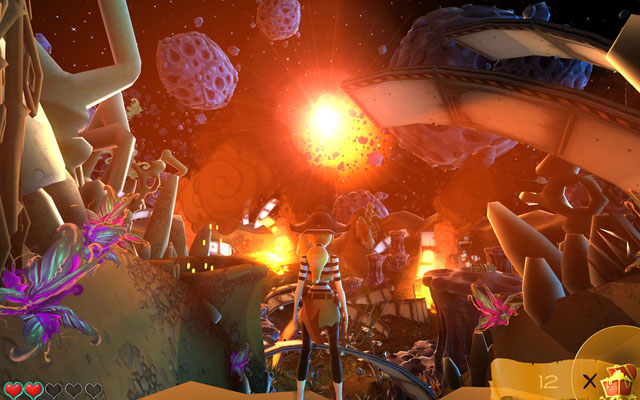 Meet the feline professor "Henceworth" and other peculiar characters that can help you on your campaign: 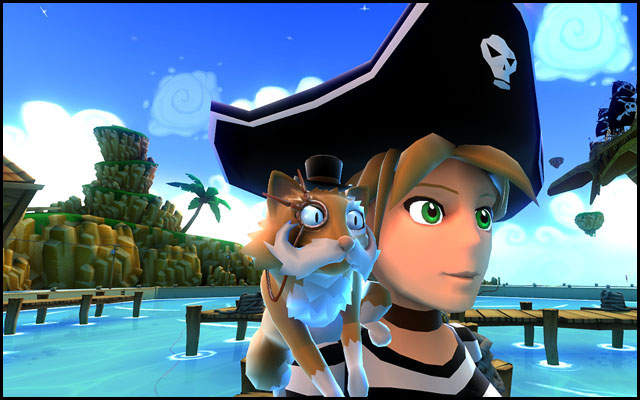 Fight against robots, alien pirates and other dangerous creatures! 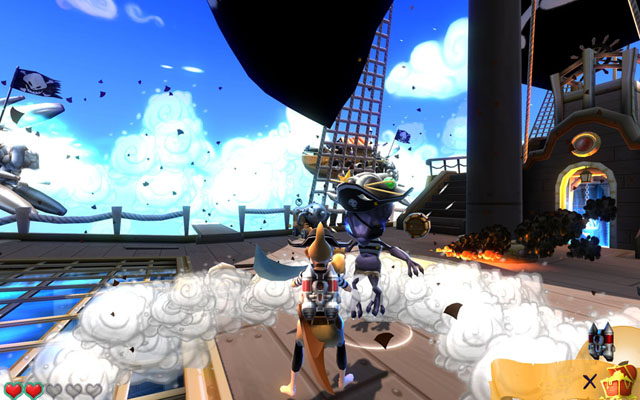 Go to town, spend your loot on new items and discover secrets! 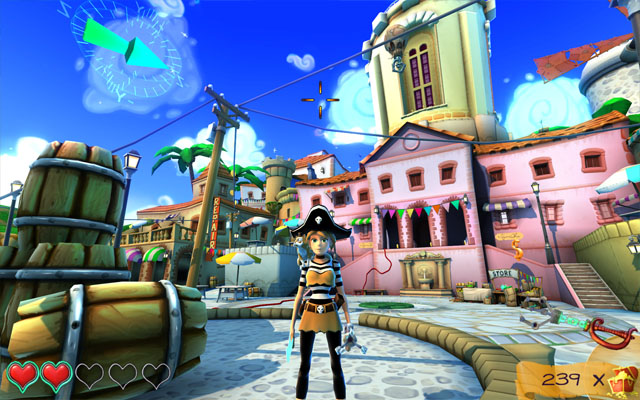 Use your inventory of spaced out gadgets to plunder the treasure vaults of New Horizons! 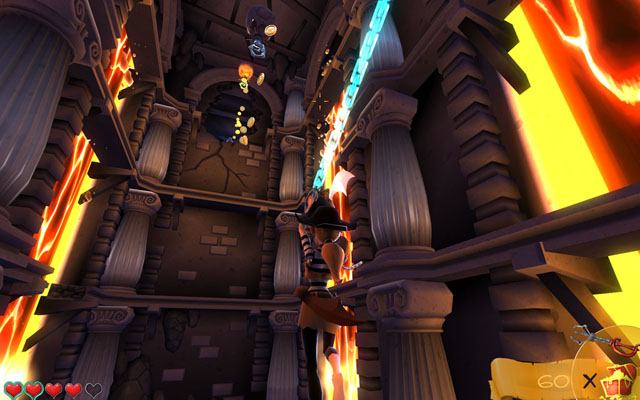 Will you be able to collect enough treasure to buy your dream mansion and retire? 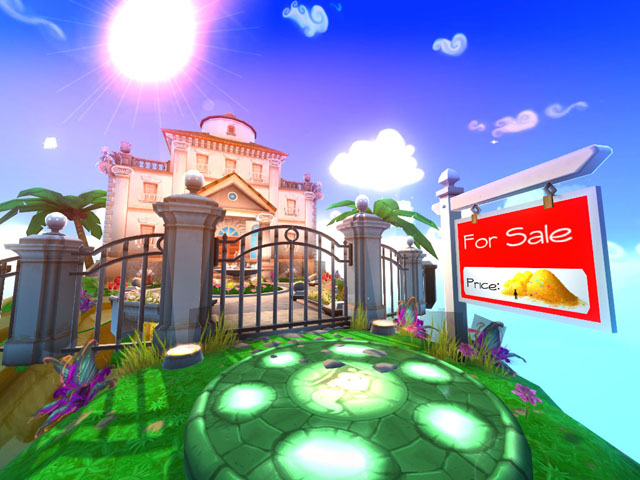 Who are the developers of the game? We are "Exit Strategy Entertainment" - an indie game development studio on a mission to bring you fresh, fun pieces of interactive entertainment. We used to work for companies such as Crytek and IO Interactive before, now we're living and working together in an apartment in Hamburg, Germany. Read more about the company and team on our studio website.

Thanks for voting and helping Pirates of New Horizons on it's quest to become the 2021 Indie of the Year. You are now in with a chance to score some free games. Help this game secure more votes by embedding the widget (or link) we have included below on your favorite sites.

Avast! Save an old friend

We just launched our Kickstarter campaign for Pirates of New Horizons Mobile (iOS/Android; tablets and smartphones) and we really need all the support and help we can get from you! 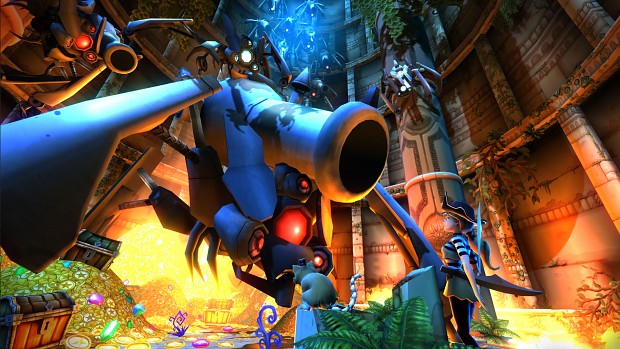 You might have heard about Pirates of New Horizons and played our free PC demo sinche we have been working on it for three years now. We started out making a PC version, but due to financial reasons we are now forced to slow down to release the game for iOS/Android (smartphones and tablets). If our Kickstarter campaign is turning out as we hope, we would love to to go back and release for PC/Consol.

Pirates of New Horizons is a 3D platforming game with a great pirate humour made by level designer of Mini Ninjas fame and industry veterans, who, among others have been working at IO Interactive, Blizzard, Kixeye, Unknown Worlds and Bigpoint. The game offers real old-school gameplay and game feeling.
You will recognize some of our inspirational sources for Pirates of New Horizons from:

We are giving the realease of this game another and last shot and we really need your help in order to support and share our Kickstarter campaign with the rest of the world. I hope you love the game as much as we do. Please help us to reach our Kickstarter goals!

Get rich or die flyin'

We've released the downloadable executable of our Preview Version and a new screenshot from the depths of our 2nd dungeon.

We've begun to plaster the walls of our pirate lair with the mugs of our handsome supporters!

What is Pirates of New Horizons about? Watch this new video of gameplay that covers the most important aspects of the game!

Play two levels for free, watch the new trailer and pre-order the game to play the first dungeon and benefit from many other perks!

Play two levels of Pirates of New Horizons for free in this work-in-progress demo. Pre-order the game at www.piratesofnewhorizons.com to receive instant...

Play two levels of Pirates of New Horizons for free in this work-in-progress demo. Pre-order the game at www.piratesofnewhorizons.com to receive instant...

Unite2010 Presentation: "No Code All Gameplay"

The slides to Adam Mechtley's and Michael Schmidt's talk at Unite 2010.

A framework to the Unity game API, that allows designers to create game logic in their levels without writing scripts in text files.

That's sad, all gameplay and graphics where done.
They should have delivered episodic content, like two first chapters first. And why not when done all chapters possibility to buy a complete project.

Failed to deliver a game to people that pre order is a dangerous situation as this people will just go away.
I saw the beginnings of the game in Unity forum, it had a fast progress, faster than before the team has grown. When a game takes too much time to progress develop it's a bad sign.

Anyway good luck, and who knows like Duke Nukem perhaps one day it will become a real game ?

Hey there! I represent Idris Radio!

We just featured your game in our latest episode of Locked On a show where we review Indie games and try and spread the joy / love of playing indies with everyone we can!

No news for a long time, whats up ?

No news for a long time, whats up ?

Checkout our preview article on PONH over at Structure Gaming:

Just played the prototype, enjoyed it a lot! I like the graphic style and the gameplay is great fun. All in all awesome work, I will keep tracking this game.

The only thing I didn't like was that I had to figure out the keyboard controls by trying out every single key. I know this game is supposed to be played with a 360 controller, but you should still list the keyboard control too. Using mouse & keyboard actually worked great once I figured out the keys, maybe except for the gadget selection. You could support the mousewheel for that.

For a full game you should make the combat mechanics a bit more interesting, maybe adding combos or something. The simple combat system was ok for the prototype, but for a full game it would probably get monotonous after some time.

there should be a "show controls" button to the right of the web player window. maybe that thing should always show no matter what.