This post goes through what this game is about, what we want to do with it, and how far we've gotten.

Posted by SpellingPhailer on Sep 8th, 2013

Hello there! Pontus aka SpellingPhailer (The Designer, Artist, Composer and Sound-guy on this project) speaking. As this is the first post for our game, I'd like to explain just exactly what the game is about. To do this I will start with a summary about what the game is and what we're aiming for, and then move on to see what we've done so far.

What is this game about? - A summary.

Terminal System Seven is a game inspired by the cyber-fiction of the 80's, where neon was the norm and "hacking" was just slamming a keyboard until the target was breached. We wanted to create a game with a programming theme that was represented in both the ascetics and the gameplay. What we ended up with was a turnbased game where the player exists in a virtual open source world. The player will be able to use terminals to create his/her own programs that will serve as units for the player. When a player begins to create a program, it will just be an empty shell, and the player will put different modules (such as health, melee attack, action points) into the program in order to customize it to the players will. Each module will increase the compile time (spawn time) for the program, and will also require more RAM (of which the player has a limited amount of) to run. A terminal can only compile one program at the time, and each terminal that the player has activated will grant the player more RAM. An activated terminal can also be taken over by a different player, and if a player looses access to all his/her terminals, he/she loses.

What's been done so far:

So far, we have done most of the basic design. We've figured out how the game will play, what modules we will have in the game to start with, and how compile system will work. There are a lot of ideas that we might work in to the game in the future, but for now, we'll start by making just the very bare bones of the game. After we're done with that, we'll move on to create a game that will be interesting to play.

We have also created mockups and made plans for how we will port this to touch devices. We believe that for turnbased games touch devices actually work pretty well. However, with the exception of excellent games like Frozen Synapse for the iPad and Android tablet, there aren't really that many hardcore tactical games on these devices. Therefor, when we began working on this game, our first priority was to make controls that would work well on a touch screen. Because of the turnbased nature of this game, there's really no hurry for the player to make his/her move, meaning that creating easy-to-use controls for this game is far from impossible. Here's a mockup of what we've done so far: 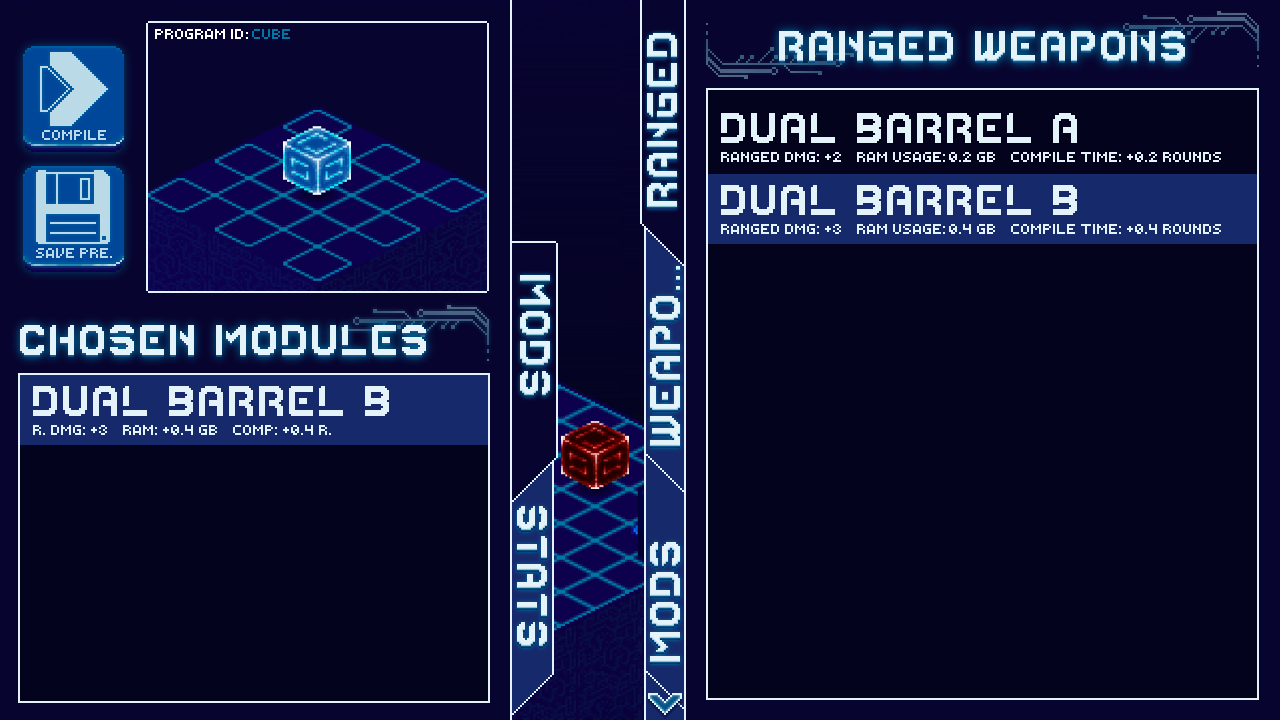 A mockup of the terminal UI for touch devices.

Of course, we also want to make sure that the version on the computer will be easy to use as well - There's nothing worse than a PC port whose controller input is design for another device. We will add things like hot-key commands, menus accustomed for computers and so on. Basically, everything form the input to the HUD will be revamped for the PC port.

As this game will be a multiplayer one, we've had to use netcode. So far, a basic server for the game has been created that has support for logging in and transferring game states between clients. The server is run by Google App Engine, so there is no connection between the server and the clients in the form of sockets. At the moment, all communication is based on http requests and http responses. We hope that this solution will allow us to service the amount of players that we are hoping to get.

Gameplay wise the game is still in its very early stages. We initially used the isometric rendering that comes with libGDX, but this introduced some major problems that would take longer to work around than writing the whole isometric rendering and map loading from scratch, so we decided to rewright that whole system. As of now it looks like the rendering is about 95 percent complete.

Fully animated units have been introduced to the game aswell and works with the rendering of the isometric map. In the coming weeks we are hoping and planning to implement more game play instead of working on the engine that powers the game play.

When I got the idea for this, and before I contacted my programming counterpart Kristian, I was planning on making this a 3D isometric game, in order to avoid most of the hassles that comes with programming 2d isometric games. This, however, would have required 3D artists, and after talking to Kristian, we came to the conclusion that in order to scale the game down and to make it doable for us, it'd be better to make it a 2D game where I did all of the art. Here's the deal though: I'm not a very talented artist. Therefor, as we wanted the game to have an 80's theme anyways, we decided to make it a pixelated game. This has made things for more doable for me.

In order to make up for lost fidelity, I have instead focused on making good animations. Now, I may be a huge fan of good animation, but I honestly believe that it's better to have low fidelity sprites with fluid animation than high fidelity sprites with laggy animation. Of course, it depends on the game, but on a general level, that's how I feel. Because of this, most of the time spent on making the sprites for the game has been spent on the animations. Still, in the few weeks we've been working on this game, I've managed to create pretty much all of the animated and non-animated sprites for the first bare-bones version of the game. Here's a couple of the current animations:

The player walkcycle (left) and the melee attack animation (right)

Whiles I haven't gotten started on any sound design yet, I have started to compose some music. It's still in its early stages, but I have chosen the style that the music will have. Basically, it'll be heavily inspired by the 80's synth soundtracks, such those from Blade Runner and Espace from New York, with some newer synths and instruments. One of the most important things for this soundtrack is that it's atmospheric, so there will a fair amount of pads and effects to create the right feel in the songs. Also, as this is a tactical game where you will spend a lot of time on the same screen, I decided to make the songs fairly long (around 15 minutes) so that the player won't get tired of them. Here's a clip of what's done so far (again - this is in it's early stages):

Final word. Or at least something close to it.

Well, that was that! This post contains a lot of information, but that's mostly because it's our first post and we had to catch up on what we've done so far. We are planning on releasing updates similar to this one at least once a week, so if you're interested, be sure to keep an eye out.

Well then, until next time, have a good one!

Very, very, very, VERY interesting and awesome, i will love to play this game, it will be free or paid?if it's paid, i will probably pay for it. (Oh, and by the way, sorry for my bad english)

We plan on making it paid. This is mostly in order to pay for server fees and such.