We may have been inactive here at IndieDB for a while, but we've added a ton of new stuff to the game while we were gone!

And once again, we are back!

The last months have been a bit tricky for us at Double Zero One Zero. Not only was there a holiday, but we were also having a hard time finding time to work on TSS. This has however finally changed, as we have gotten ourselves an office where we can work around 6 hours everyday on the game. Because of this, we felt it was high time to reinstate the Weekly Update here on indieDB, as there'll be a lot more happening to the game from here on. This week, we'll tackle what we've done these last few months, and get you up to date where the game stand right now!

During this past week, we've gotten a playable version of the game running. Because of this we've been finding tons of balancing issues, features that needs to be added and over all a lot of things that need to be fixed from a design perspective. For today though, I'd like to explain just how the system for creating units in the game works:

In TSS units are spawned by ingame objects called "Terminals". Every unit (or "Program" as we call them) are created by using different modules, that act like building blocks. Among these modules are stuff like health, batteries (which gives you Action Points (AP)), and melee/ranged attacks. Every module costs a certain amount of RAM and a certain amount of Compile Time.
RAM is this only resource in the game, and works similar to housing in RTS games. This means that each unit costs a certain amount of RAM to run, but if the unit dies, you'll get back that RAM. The player gets more RAM by claiming terminals (which also allows him/her to spawn more units), and looses that RAM if the opposing player steals that terminal.
Compile Time (CT) is how many rounds a unit takes to spawn from a terminal. The compile time is based on what modules are in the unit. Different modules give a different amount of compile time.

Added to this, we've also made it so that for each duplicate of a module, that RAM cost of that module gets 50% more expensive. For an example, if you use two melee attack modules, the first one will cost 2 GB, whiles the second will cost 3 (and a potential third would cost 4.5). This is for balancing reasons, as we noticed that one super unit could take out an entire army of weaker ones.

This is just the basics of how a unit is created, but as you can tell, there's quite a bit of of depth meaning that there's a lot of balancing that is being done every day.

There has been quite a lot of work in the graphics department for that last months. Among these things are is the new Terminal Menu (where the player costumizes the units he/she wants to compile), an animation for when the terminal is compiling, a new version of the action menu, a box with icons for hover info about the units and more. Let's face it though, you're more interested in seeing stuff that reading about it, so here you go: 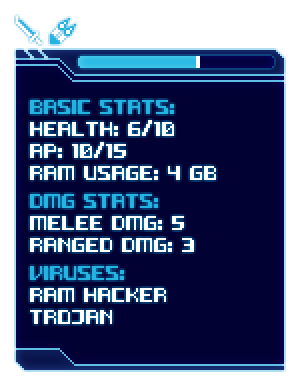 How the info box looks at the moment. The icons on top represents what damage modules are in the unit (This makes it faster to glance over what mods are in the unit). When we add viruses to the game, we'll also add icons for those that'll be shown up there.

The look of the current AoE attack.

The current animation of a compiling terminal.

The animation for the background.

A short demonstration of how the terminal menu and info box looks in game. (Click for full size)

As mentioned earlier, we've now started testing the game by playing actual rounds against each other. Me(Kristian) and Pontus that is. As a result of this we've found tons of bugs that I wouldn't have found otherwise. So a lot of the programming this week has been spent fixing bugs that broke the game or made it not so fun to play. But now that those bugs have been removed we've actually started to play rounds that take 40 minutes to an hour even with just the few basic features that are currently implemented.

A lot of time has also been spent reworking some of the old UI and implementing new UI. Instead of just a health bar above the targeted units head there is now a window that pops up and shows all information such as unit health, ram cost, action points and what kind of damage that unit can do(Melee or ranged for now). Which also makes it easier to tell the different units apart when fighting. As they all look pretty much the same.

The main focus on the programming part is currently to create a playable version of the game that is comfortable to play but with just a minimal subset of all planned features. Then when we're comfortable with how the game works we will start cramming it full with new exiciting super awesome features!