Tankr is a top-down Arcade developed by Mighty Toast, where you can play with or against your friends in dozens of frenzy arena multiplayer battles filled with powerups, bouncing bullets and explosions... You can even design your own battlegrounds!
Up to four players can play together against the IA in any of the five campaings of increasing difficulty; the game offers over one hundred stages. Players also can take free-for-all battles on local and online games, to know who is the best in a selection of battlegrounds, or being able to design new ones thanks to the built-in Map Editor. 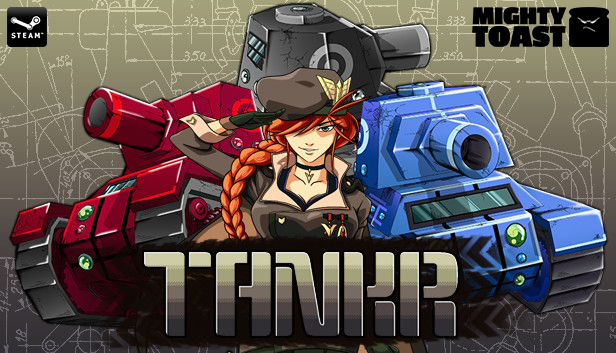 Hi!, after month of hard work we can announce that the release date of Tankr will be next monday, June 6. Available on Steam for Windows, the Mac and Linux versions would be ready as soon as possible.

Tankr is a top-down Arcade game for PC (Windows, Mac and Linux) developed by Mighty Toast that will be released June 6, 2016.

Play with or against your friends in frenzy local & online multiplayer battles plenty of powerups, ricochet bullets and explosions in dozens of levels or design your own battlegrounds!

Gameplay
Tankr is inspired by the classics of the arcade era. Up to four players can play together in local against the IA in any of the five campaings of increasing difficulty; the game offers over one hundred stages. Players also can take free-for-all battles (local or online) to know who is the best in a selection of battlegrounds, or being able to design new ones thanks to the built-in Map Editor.

The gameplay focuses in ricochet shoots to destroy your enemies by surprise at the same time that you tries dodge the foe's bullets and explosions. We added some spicy to the game with power-ups that improves your tank (like speed up or shields), the main weapon (more bullets or ricochets) and secondary weapons (like rockets, mines or explosive drones).

Others elements of the game are the type of terrain that influence the speed of the tanks or the visibility. Also, the enemies have different weapons, statistics and behaviors too.

Development
This isn't our first game, we have developed some small games for past global and local Game Jams like this or this, but without a place to work together and that two of our four members can only work in their free time, this game is a challenge for us.

This game took to us more than a year to be developed (with zero budget), it's developed in Unity and our team is mainly programmer sided, but that not prevented us for finish a cool game!

We're working in a demo for the launch day, and after the release, we will continue to work to port the game to Mac and Linux (as we promised), and try to fix all the bugs and errors than could appear after the release.

Check the latest news about the development of Tankr. UI and Competitive mode ready!

We're still working hard in our game, and showing it in gaming events.

Know our plans for Tankr after the crowdfunding campaing.

Fun game. Reminds me of some good old classics from my childhood :D
I am really sad about the size of the arenas though. Hope there will be bigger ones in the future!

I have some more gameplay footage here if anyone is interested: Youtube.com