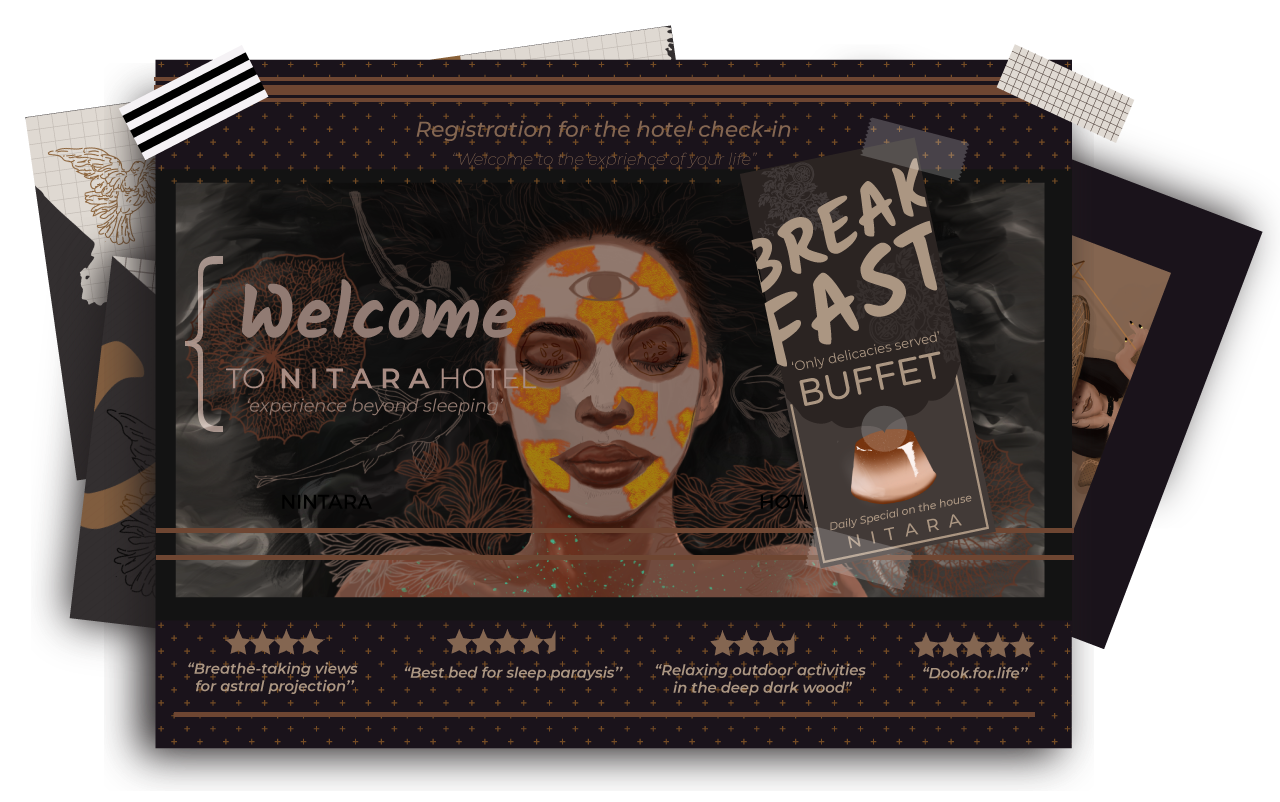 You’ve been meaning to go on a vacation now for years.
Hotel Nitara seems like the pitch-perfect spot for it. Nitara would be an exotic,
natural paradise even if there wasn’t a top-of-the-line resort built on top designed
to cater to you every second of every day.

But something is off. There’s this group of scout kids staying there that look like they’ve seen a ghost.
You overhear murmurs of missing guests from the hotel staff. A weird marking shows up on your door…
and then you find a corpse in your room, intertwining you with a chain of events involving
a criminal power vacuum and a terrible conspiracy.

Maybe you should have just stayed home. But then, you were looking for a change of pace...

"Sleeping with third eye open" is a 2D isometric ,narrative, role-playing game.
As player taking role as a guest booking in for a week stays at NITARA hotel,
Revealing itself surreal terrifying events to its patron.
A narrative that are branching into horror, science fictional or Noire themed.

Sleeping with third eye open is about creating an calming escapism
with thrilling twist experience of a vacation. A folk horror tale with whimsical touch.
Fantasy elements of fictional superstition believe ,that is essentially about people's
emotion and connection. a folk. Sleeping with third eye open's fictional narrative
is inspired by Southern-east folklore, Thai mythology and Golden triangle.

"Hotel Etiquette for the Mythical patron" | { Gameplay coverage and Features }

"Greeting to the anticipated patrons and sincerely apologize for the lateness that more than fashionably."

Here's a big chunk of update with more concrete theme of folk-lore horror art direction and style.
This post will cover on all Gameplay aspect ,mechanics, New WIP features and interface.
also a snippet of an intro scene on the test build including music and sound.

So for counting down to days to Halloween and in spooky spirit.
do follow the game twitter here : @3rdEyeSleeping
I will be uploading more art pieces and a high-res and zoom-in of what already post on here.

Thank you so much for following the game and staying support.
And, Welcome for those who just discover the game too!
Stay tune for more direction of how the game will go and way to support.

"Psyche" is the main player score attribute system throughout the game.Determining how much your character is logical and present in the tangible reality or to be sensitive toward energies and the other realm.

'Psyche' will be affecting the effectiveness of your perception skills. It is also a factor on how your player experience on each quest scenario and how your story will pan out providing more options or affect special reactivity from other characters and your surrounding.

'Psyche score' will be gain or reduce by your decision in quests or trading it for doing certain ritual. There's several way to manipulating the player's psyche by using consumables,perform a certain ability or finishing a sub-quest. Psyche status can be checked by Player's character hand interface.
or seeing Hotel Psychiatrist NPC for a result that give more accurate and immersive experience.

‘Psyche effect’ will be shown by visual distortion in the player’s character isometric avarta
as the character subjectivity presented effect.

Senses are player character’s 5 senses unlock abilities that can be performed to gain insight, reflect on past conversations, or simply notice the environment around them.

'Insight' is information treated like an item; it’s automatically gained after the player discovers information. Obtaining insight can change future scenes and offer new dialogue options, as well as enhance the player’s abilities.

Perception is a sight , hearing and scent abilities of the player that can be use gain an 'Insight' piece, performing on surroundings or to pass a ‘Perception check' on scene sequence.

Perception is a sight , hearing and scent abilities that can be use gain an 'Insight' information on surroundings or make 'Perception check' on scene scenario :

'Effectiveness' - determines your ability level with the current sense highlighted. This determines whether or not certain perception checks can be cleared, as well as the quality of insight.

'Psyche status' - is a measure of your current psyche.

'Influence Marks' - are a notification of your current buff or debuff. Gained by using consumables or as a consequence of a quest or event.

'Locked feature' - are enhanced utilizations of the given scent that can be unlocked as the player progresses throughout the game and discovers them.

A Verbal :verbal options are any actions involving dialogue. Verbal influence marks can add more dialogue options.or block out others.

An Action : are any physical interactions with objects or characters. Action influence marks affect the player’s ability to gain insight, items, or pass checks in specific scenes.

allows the player to enter the Astral plane, where all that is hidden is revealed. In addition to giving the player access to new areas and triggering certain story events, it allows the player to have full insight for the duration. The player’s psyche drains heavily second by second as the player stays within, however; they’re encouraged to use it wisely, as it’s a limited resource.

Items in the game fall under four categories:

Consumables are items the player can use to manipulate their psyche or add an influence mark. Potions last for the duration of a given quest. Food lasts over a period of time.

Ingredients are items used or required for crafting consumables at a brewing pot or for performing rituals.

Charms are wearable influence marks that last as long as they’re equipped.

Outfits are wearable items that change the player’s look and can additionally add influence marks or allow infiltration.

Through wearing these disguises, the player can access off-limits areas, new dialogue options, and stealth mechanics.

If the player has accrued enough Kuman-Thong Charms, they will be prompted with a quicktime event to perform special actions or choices; throughout your stay, Kuman-thong will be acting as a clairvoyant, providing unique options that ignore the player’s sense effectiveness, psyche or insight, as well as providing foretelling options which may be absurd but also may be invaluable for future incidents.

'Sneak-peak of one of an intro scene with old UI, showcase an WIP process on the game dialogue system'

Music and Sound by @Spellbang

Your choices in conversation is a way to result in branching.
Moreover, choosing your tone will affect the character 'value' and 'relationship'

Certain NPCs in the game can accompany the player through certain quest missions; these companions are key to the narrative and each of them has variable value and relationship scores that provide perks and affect the direction of the story:

Value: Direct influence the player has on the companion, allowing the player to challenge their beliefs and more strongly influence their decisions. Player choice of words and actions, in addition to quest outcomes, can influence this metric.

Relationship: The companion’s fondness and trust for the player. Better relationship values offer side quests and increase the character’s loyalty.

Please do follow for an more update and Upcoming art for the spirit of Halloween .

Thanks for checking out the Sleeping With Three Eyes Open super secret preview build! This build will introduce you to the setting and tone of the game...