This is the Week-In-Review posted to our blog. This week we go over some additional content and bug fixes being added to the game, post-beta release.

Hey guys, so this week was pretty monumental for everyone here at Code}{atch and the community. We graduated from Alpha into Beta, with the release of 0.7.5 this week. And so far the responses have been absolutely fantastic! It's really good to see so many of you enjoying and playing Starforge! We've worked really hard on this update, and making sure it's running as smooth as we can. This week was dominated largely by bug fixes, as evidenced with the release of a couple of hotfixes. We've introduced a new creature this week, the Daperdillo. An animal of prey that is considerably tougher than the lovable Wurmi, but filled to the brim with meat and interesting loot drops. They also feature a distinctive green glow, not as intense as the Wurmi's but bioluminescent all the same.

Moving onto something that the development team has been working on integrating has been increasing some base defences. We have a new turret that'll help enterprising colonists on Atlas have an edge over their peers, introducing the Mini-Gun turret: 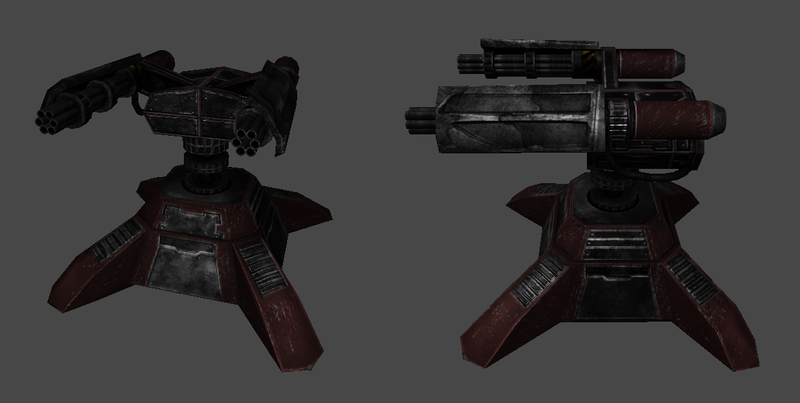 The minigun turret features two six-barrelled guns running in parallel on a 360 degree swivel that will be ideal in anti-personnel roles in just about any deployment. Ideal for defense of mining operations when it becomes necessary to secure a node for an extended period of time. And of course, another peice that is being worked on going into the game shortly is the Smelter. Our artists are hard at work making it come to life and we cannot wait to show it off to you! The bug fixes we've worked on this week are myriad. They include:

- Fixing the garage doors from having different textures- Fixing sleeper names from being incorrect- Currently making breach charges damage blocks properlyAnother notable and major bug fix that actually went out this week, was related to our dedicated servers. After we launched, we had discovered that the servers were creating hundreds of instances of Starforge and running them simultaneously. This warranted bringing the servers down, patching them and updating them to ensure this performance leak did not occur again. We've since been paying close attention to our servers and tending to them as the week has gone on. We've also put in considerable effort into resolving any saving issues in regards to placeable items including blocks. We've also encountered some spawning issues post-release that we're taking care of right now as well. Also, we've fixed the creatures glitching out when they're killed, and are working on when to implement that fix.

Alright, moving along to more content, some of you have probably noticed the white barrier that appears when you reach the edge of the play area, and that is being generated by the World Spire. Right now, we're using the VAT as a placeholder for this:

The world spire is responsible for generating the prisoner field, and is located at the origin point. There are plans for game mechanics revolving around the World Spire that will be touched on as it is developed.

As you all may know, we have the Rusty Assault Rifle, and the Assault Rifle, a better, shinier and more accurate version of the same thing. But did you know we're also working on upgrades to the Mini-Gun and Chainsaw? Check them out here: 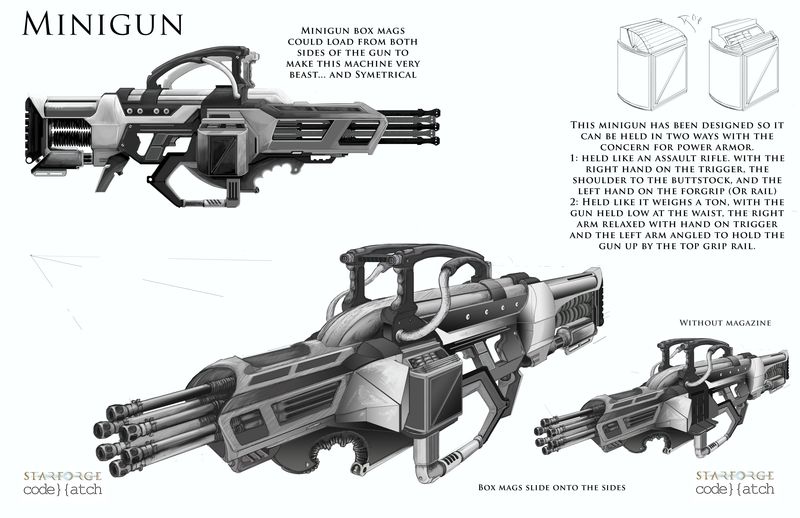 and a beautiful 3D shot here:

All six high-tech barrels of blow 'em away goodness!

Here's an upgrade to the chainsaw: 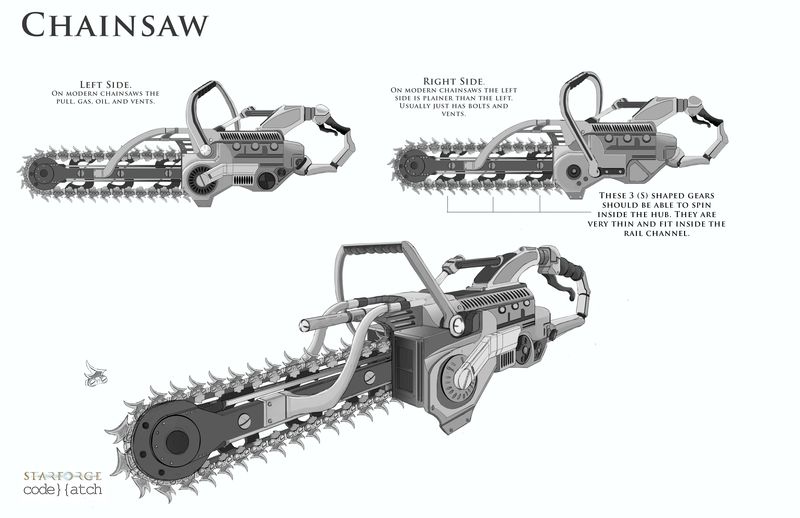 Rend and Tear Players with Impunity! ...and of course Trees. Because that's totally all I'd use it for <.< 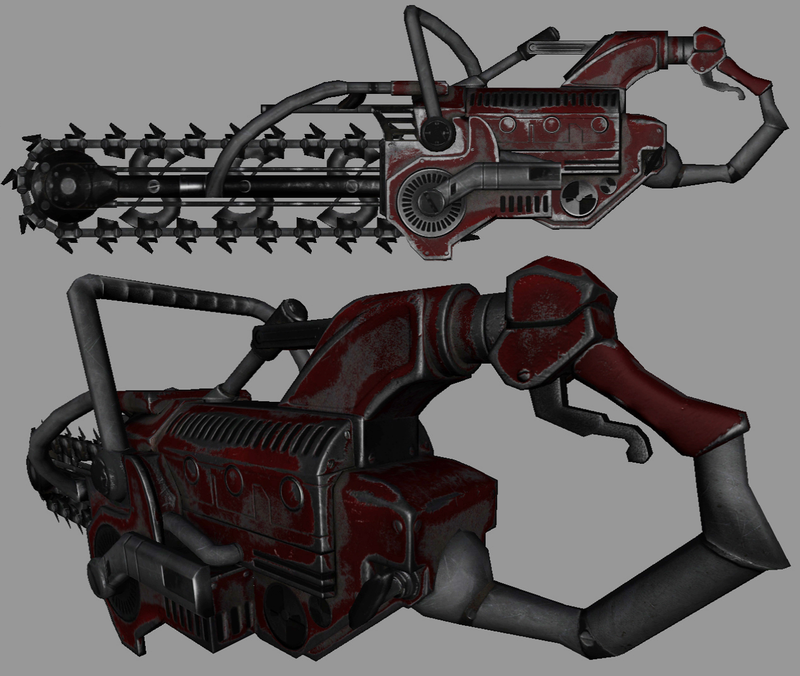 As you can see, we've been quite hard at work on the Beta, making sure you all get the amazing content you deserve from the Art Team's efforts, and employing the Programming Team to smooth out and stabilize the online play experience as much as possible.

We've been very excited about this release, and cannot wait to introduce more content on bigger, smoother servers.

Hope you all have a great weekend of gaming, relaxation and enjoyment with the Starforge Beta.

Loving the redesigns of the weapons and the introduction of the new little beasty, I play this with friends occasionally and I'm sure we're going to really enjoy the work you put into the new changes. The spire seems pretty exciting as well, can't wait to see that go through development :)

Nice progress since I tested the Free 2 Play version, good work on this :).

So far, I miss Ragdolls from dead bodies (from 7.5 fresh beta), it was a real pain in the arse with the small non-hostile npc, but never had a problem with the worm-like hostiles going ragdoll mode, as they seem to brake themselves thanks to it's body, which was really good.

I also noticed that now, when you drop something, it has a probability to spawn on the floor something totally different from what you dropped.

Another thing that I would like is a way to loot faster, as each time I get something from a box, both menus reset, making it slower to get everything.

I would also like that the inventory had memory, so I don't have to scroll always down to where I want, and also memorized what tabs I have colapsed and what not, It's annoying to have to scroll though 57 BPs that I already have to see my other items.

Other thing I wouldn't say no are some buttoms to Collapse all/compress all tabs, and a show only items in inventory buttom too. Finally an option to hide all already reseached bps on inventory would be really useful to fast check if you got anything new to research.

That's all I can remind so far, I understand it's a beta, but still I think by now the inventory should be as straighfoward and intuitive as possible, and all these things could contribute to that, imho.

Thanks for your time, good luck, and see you in the game :)

You guys HAVE TO REPAIR YOUR REP WITH THE COMMUNITY! This is some bloody amazing work! Get out there, address as many people as you can on steam, Put some effort in and let people know that they got their moneys worth, or, are going to get it. Im actually going to grab this game now, Thank god I kept an eye on your work.