An anime life simulation with space, music and RPG elements? How weird! This is the proposal of the this project, made by a single passioned girl gamer and aiming to deliver an unique, cross-genre experience. 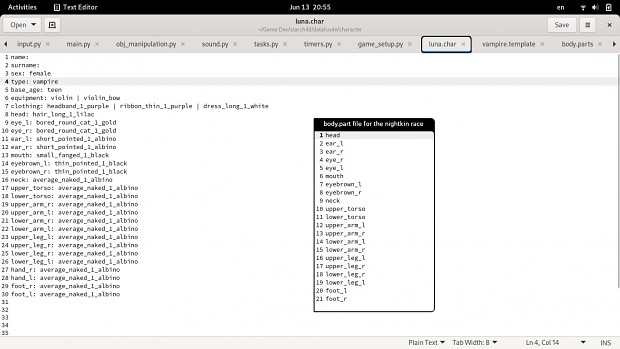 Each game race will now have a body.parts file listing which parts the game should expect for a character from that race. Each character will make use of a charactertype.template file which cannot be deleted with information for the game about how to build a default character for that type (vampire, psi, etc). The character file itself will be named charactername.char and will be based on the template file, containing specific data regarding a given character. Only a character file will be changed by the game and the player. All game characters will now make part of such a system, such a concept will make creating random characters a breeze. I shall tell you more at the next news article.