Fight in space or on the planet, or just travel in universe. Visit cities and buildings, mining resources, trade or speak with the population of the planets. Explore something new. Buy yourself a new ship, upgrade him and hire a whole army of the crew!

- Planets:
The planet in the game is not just a decoration. This is an interactive huge object on which we can land. The planet is separated into regions, and regions into locations: citys, military bases, forests, deserts, etc. Each planet has its own conditions - somewhere is no oxygen, somewhere is hellish heat or cold.

- Space:
Travel among the stars and find something new. The galaxy is separated into sectors. Sectors include in himself star systems, between which we can move by hypergates. All the star systems in the game are not fiction, but taken from a real galactic map. For example, the first sector consists of real stars Proxima, Alpha and Beta Centauri, as well Luman-16 star and Barnard's star.

- Ship management:
There are several available ship classes: from small patrol ships to larger frigates and cruisers. Ships have many parameters: hull durability, mass, energy, speed, evade, count of boarding capsules, etc. Each ship also has a different number of weapon slots and slots for internal modules. Be careful! During the travel you may lose your ship, the all crew and the resources you have find. The stakes are high. If you lose a ship, you can take same by insurance from part of cost. - Crew management:
In game you control your character – moving, shooting, activate objects. You are having crew members, which you can control by orders: go to boarding, attack enemies, protect ship, follow to commander. Crew members differents by characteristics: health, weapons, resistance to no oxygen, cold, heat. How many crew members you can take on board is determined by the capacity of the ship.

- Tactical mode:
Watch the full situation in battle, in tactical mode you can control your crew and ship systems manually. - Progress:
On your personal space station contains all your ships, soldiers and resources. Accumulate the property! Earn money for tasks or eliminate the enemy. Mining resources or buy them from traders. Find the hidden treasure. Buy more advanced equipment, more powerful ships, and stronger soldiers. Thanks for voting and helping Spaceship Commander on it's quest to become the 2021 Indie of the Year. You are now in with a chance to score some free games. Help this game secure more votes by embedding the widget (or link) we have included below on your favorite sites.

Update has been uploaded! Was add 5 new modules of the Earth Federation and 2 modules of the Robot Fraction.
Some modules are sold at the player's station, while others will have to be found at the traiders. 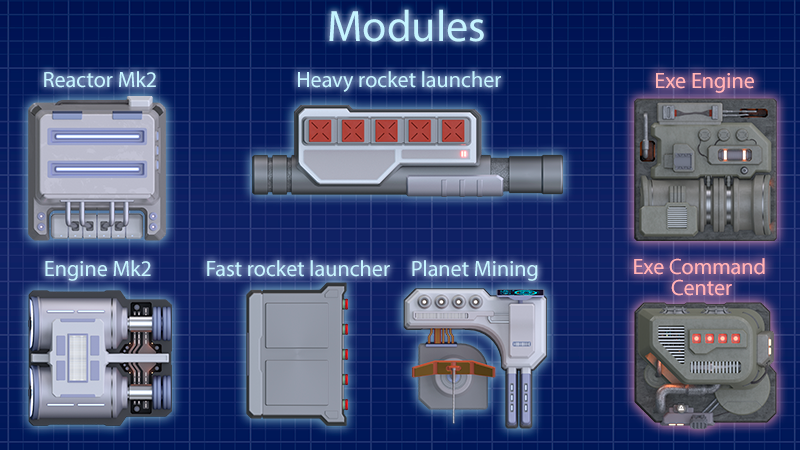 In addition to new modules, the main menu has been improved - now there is a new planet, space traffic and several new special effects.

In addition, many changes and corrections have been made:
- Fixed incorrect work of hand weapons, shooting now is much more comfortable and the player is no longer inferior to the AI characters.
- Fixed many places in Alfa City where there were incorrect colliders.
- Loading of all locations, especially Alfa City, has been significantly accelerated
- Added new engine effects. Also fixed the bug when engines turned on when a ship landed on the planet
- Optimized decorations characters
- The ship's prefab has been optimized, and now it weighs much less, which has affected on increased loading speed of space battles and planetary landings
- The ship's damage effects have been reworked (hull damages). And also is corrected the unpleasant moment with too loud sound from these damages
- The skyscrapers now have elevator motion animation.
- New VFX - flashing lights, traces of missiles as well the missiles themselves.
- Now the monitor of the enemy ship and the player's monitor shows hits of shells and missiles.
- Fixed shadows from modules
- Fixed bug when player received reports of enemy ship damage.
- Fixed a rare bug with the incorrect work of the player's ship in the system map.
- Removed the camera frieze when moving between systems
- The landing module has been removed from the robots ships, because they are not capable of boarding, for this will be introduced new ships and characters at the robot faction "Executor"

Starfleet is adding with a new cool crew member - a heavy trooper in an exoarmor. He is armed with a high-speed plasmagun and has resistance to any climatic...

The robot faction "Executor" has been expanded with a new Corvette-class ship and a location on the planet Djadar.

The game has the possibility to install various modules on your ship. Today, there are the following types of modules: battle, boarding, engine, reactor...

I want the game!

-Can you made mod with universal threat, some universal enemy who attack that part of galaxy like in Space Rangers. Brutal space battles with advanced enemy, underground bunkers for survivals on invaded planets and resistant leaders who give you jobs and so ..
Participation in massive scale battles with no mercy ..please!?

Hi! The game constantly improved. Large-scale battles are also in the plans. Also, these battles can be do in a cooperative with friends.
There will also be something like events, where, as you said, there will be attacks of various fractions on the Earth Federation systems.

looks promising, keep it up man

Thanks!) I try to make this game the kind I've always dreamed of.

Hi i have some question concerning the game
1:the game will be on steam ?
2:i see early access the 20 april that mean tha game is playable now if i buy beta pack ?
2.5: if its playable wath we have inside for the beta ?
3: when we see what you have in store for the future update ?