Space Jammers is a 1-4 player Co-Op, Top Down, Bullet Hell, Glitch, SHMUP, Rogue-Like, with Online Community Achievements, Unlockables, some persistent elements, weapon crafting and randomly generated levels, bosses, and items. It is a mash-up of several games: Gauntlet/Smash TV and Asteroids/Galaga. Up to four players can play together on one screen, dodging bullets in slow motion.

You play as a band of alien kitten pirates on a music tour. While traveling across the galaxy, your crew stops to raid a ship when they disturb an ancient capsule and are transported to another dimension.

Stay alive long enough to reach the next exit before it closes forever. Will the next portal take you home or some hostile reality filled with deadly fast food products? Grab your ammo and some friends then dive down the rabbit hole with the Space Jammers!

Currently the game only supports an xbox 360 equivalent gamepad (xinput). Be sure to have these plugged in and turned on before starting the game, or it may have trouble detecting them. Mouse and keyboard is also supported.

The first level is a tutorial/intro stage. You will die a lot, that's ok. If it becomes too difficult, play with at least one other person since you can revive dead players. The game will only end when ALL players are dead. As long as one player is still alive, you can continue to revive dead teammates or simply rush to the exit without reviving them. You must unlock the exit door in each top down stage to exit. Collect all coins or kill the boss in order to unlock the exit door.

To celebrate our Kickstarter campaign we ran a Let’s Play contest back in September. Now that the Kickstarter is in its second week we’d like to announce the winners!

First off a big thanks to everybody that entered the contest, it was really fun watching your videos!

Our first place winner is a perfect example of how the game is best enjoyed: get some friends over and share the fun together. Congratulations to Gamerholics Anonymous with their video here. They get to help design an enemy live on Twitch this weekend during the development stream. They will also receive four Steam keys for the game when it becomes available this December.

Taking second place is Scythe Plays with his video here. Get to see what the game is about when you’re playing by yourself while being informative on how the mechanics work. Besides getting a Steam key, Scythe also gets to join the development stream live. He will be helping design a weapon for use in the game.

Third place is a Let’s Play by ArcJamie. Well, he mostly shows what not to do: dying a lot, but he does so with style. There’s even the occasional song! For that he gets a Steam key and think up a nickname for a boss. It’ll probably be the one he kept dying to in his video…

A special shout-out goes to Second Player, a Guatemalan YouTuber who made a fun Let’s Play of the game in Spanish. We don’t understand a word you’re saying, but you’re a funny guy. We also really like your hat!

Get Notified of NEW Streams

A big thanks to everyone who entered and we look forward to see what our prize winners will add to the game this weekend in our development live stream. Give us a follow on Twitch to be notified when the stream goes live!

Get Updated on Development

Space Jammers is launching on Kickstarter November 8 to raise awareness and funds for localization and multi-territory release on several platforms. Check...

This is the first update for Space Jammers since being put into the wild online. There are many bug fixes, new features and updates to previous features.

Vote for SpaceJammers on Greenlight!

SpaceJammers has been put on Steam Greenlight as of August 1st! Help me out by voting yes! If you like what you see, leave a comment.

Just tried the alpha with a friend. We couldn't choose characters at the beginning, the one with the joystick would have to enter and the one with the mouse and keyboard would join in the game (it wouldn't work otherwise).
It's pretty entertaining and hard.
One thing you could add that Nuclear Throne does is center the camera in a point in front of the character instead of the center, then the player could see more of the map in the direction they are watching. Try it on nuclear throne to check it out.

Fixed and added that camera thing you were talking about.

This is sweet, tracking and voted on greenlight

ah man u had done great job on this game but there's still many bug, im myself working on GML if you need any help contact me.

Yes there's a bunch. Thanks for offering help, I am still learning gml and how to code in general (I'm an artist by trade). I'll friend you :)

OK, we may help ourselves mutually ;) 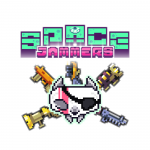