Shoy Schot! is an additive, strategic card game created in C# with text-based graphics. Starting out as a simple mini game about flipping cards and gaining ownership over the game board, it soon blossomed into a full fledged card game with a metric ton of customization options and gameplay modes. And with Shoy Schot! nui, it has finally reached its ultimate form! While retaining all features from Shoy Schot! Stand-Alone Edition Version 2.0.1.9, New features to Shoy Schot! nui include (but not limited to): a Custom Rule Set Maker, where players can build their own custom Rule Sets; Endless Tower, which is a survival mode; a Score Attack Mode; Arcade Challenges where players can try to conquer all 40 challenges; a single player tournament mode called Arcade Battle Campaign, a Tutorial Mode, where players can learn the basics of the card game in a new, more interactive way; a new mini-game called Clementine; 26 more Accomplishments to earn; more stats; and slew of secrets and tweaks.

This is a Demo Version of the electronic card game: Shoy Schot! nui. Enjoy! (PC only)

The Demo Version of the game will allow Players to play in World Tour, Endless Tower [Standard Mode], Score Attack, Arcade Challenges (Level One), Tournament Mode, half of Tutorial Mode, and the Alpha State version of Clementine. Everything else will be closed off including, but not limited to: Loading and Saving the game, Custom Rule Sets, Stat Pages, Profiles, and other features. 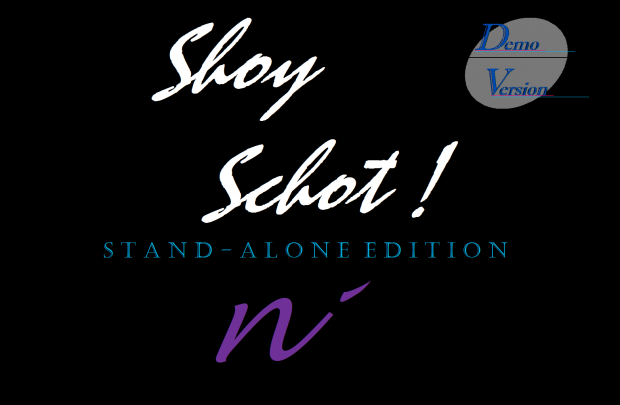