Hello, mi name is Andys and i want to show you this game that't i've been working on, that is just a personal project, i love naruto and that's why im working on this project, showing my ideas about a ninja game, i want to give the player the freedom that a shinobi deserves in a battle.

The movement its like third person mouse with four directional buttons, there is a modifier button (Shift) that works on movement to make the player runs faster, the jump button is the spacebar and you can modify the jump direction with the directional keys, you can jump twice in the air, the water system is W.I.P too, you can keep over the water when you press the modifier but if you jump and release the modifier you will fall inside the water, there is also a tree movement special system wich is performed by pointing a tree with the modifier held down and jump and the player will jumpdirectly to the tree and while the player is going if you keep the modifier and point to another three when the player hit the floor will automaticaly jump to the last one pointed.

The combat system is very basic with the left mouse button and you can perform combos in the air or grounded, also if you keep the left mouse pressed the player will start charging an attack(will be shown in the next video).

The jutsus systems is easy to use, you'll have a fast button jutsu(right mouse) where the jutsu store can be performed without hand signs, you have 10 jutsu slots that are shown by pressing TAB then if you click one of them the player will perfom the hand signs but no trhow them, to trow you just press the buttons from 1 to 10 ex button 1 creates the first slot jutsu number 2... etc...if a jutsu has a special ability like separation(triple firebal) or chasing player(water dragon), you can activate them after creating it and after that pressing the modifier(Shitft) + right mouse, that will be shown in the next video.there are many other surprises but they'll be shown the next updates but some features of the games are: 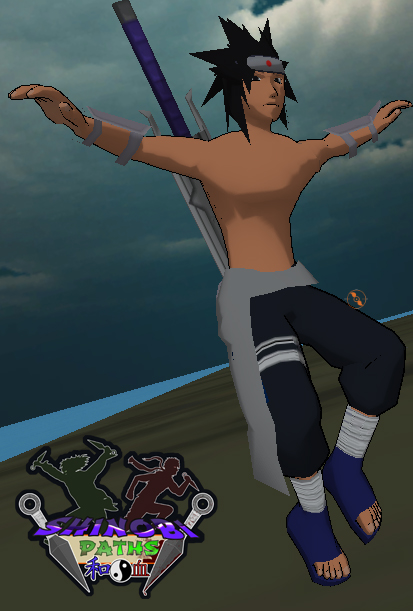 Yeahh shinobis, now i've just created a forum for the game, there i will be posting updates and you can socialize with other players, it's a little bit empty yet but with your help we will be more and more, register and introduce yourself in the forum, ask questions and make suggestions.


Ok let's talk about the game:

I've been testing some jutsus, defense jutsus are working well, and some basic forward movement jutsus like fireball water dragon, etc. An as i told you in last updates, the combination with weapons is W.I.P now, i still making the concept and just gathering my ideas to make a final decition, that's a very important part of the game, so jutsus and weapons need to be perfect I'm just having troubles with the jutsu creation point, every jutsu goes out from a custom creation point, and also i've started programming the jutsus animations when the player creates them, and effects like particles or lights. 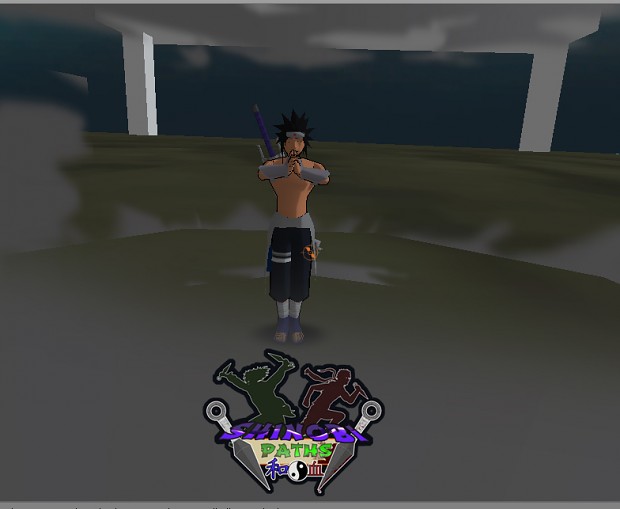 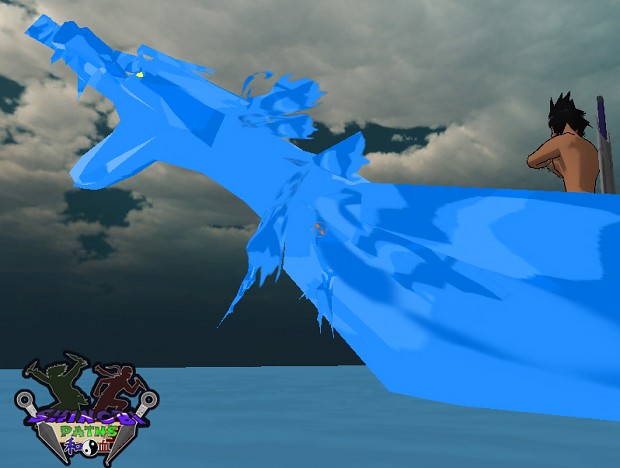 So, now you just can throw singles shurikens, single kunais, multi shuriken/kunais and a big shuriken, but now it's time to take the weapons system to the next level. combination,cheat, explosives, and specials. The weapons bellow aren't textured.They have different speed and damage and the can hurt other players, and the animations of the model are done and there are 4 different animations. 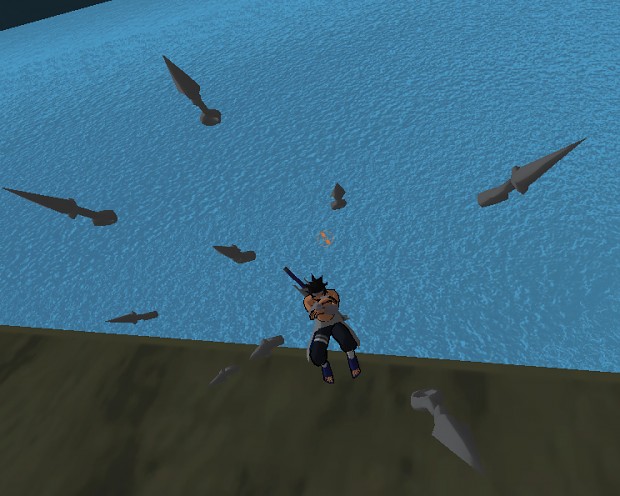 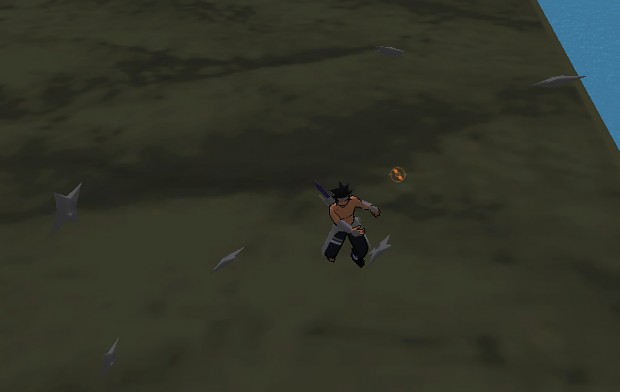 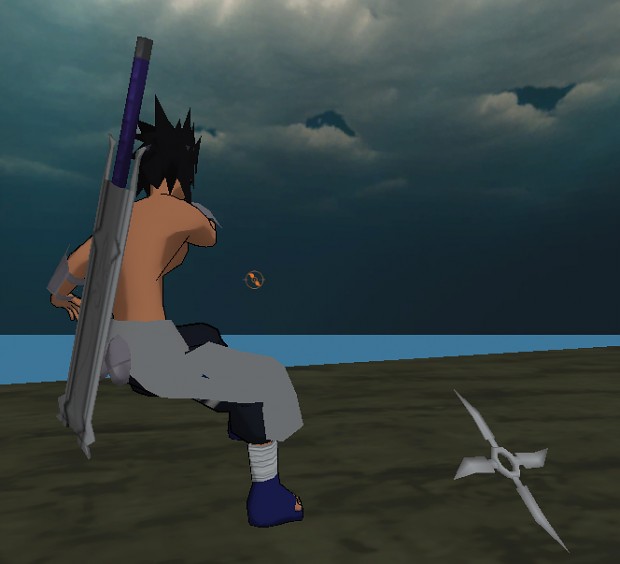 My taijutsu still WIP i'll have to fix some bugs that are very funny, but i'll have to finish it after i finish the weapons system. The animations are done so now i have to code , that sword it's the test sword, i'm planning to code sword later but i want to know how that sword looks in the game, this week will be long. but remember to keep in touch in the forum and facebook. 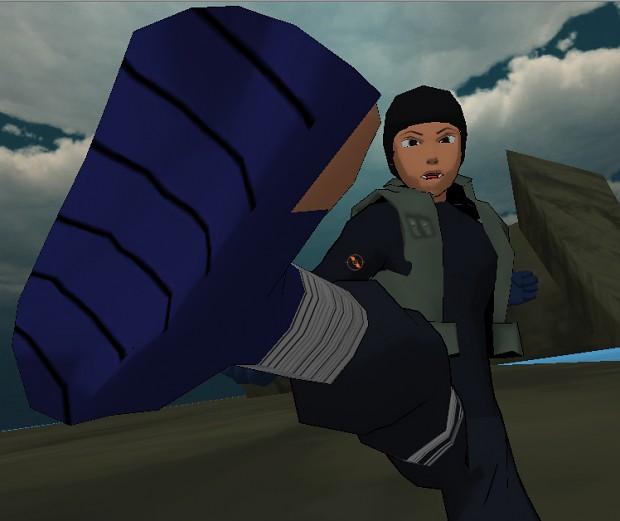 And as you saw, i used different clothes in the picture, that was testing the customization meshes and how the clothes will be, i have tops, bottoms arms accessories, masks, shoes, gloves,hair, upper top,head bands, etc.., i had those meshes done and saved, and now it's time to put them together to code them later.

That's all for today, i hope you like and the next video will be available soon, talking about the jutsus the weapons and taijutsu.

i have a development blog where you can see the deep explanation of the gameplay and the beta build will be available there.

The movement system is in development, it's a little buggy but i still working to fix all bugs this video will show you how the game will work.

Well after struggle today with tree i can say that i´ve almost finished them, i´ll speak about trees and stuff like that.

Swords for the development

i've done some swords to start working with the weapons melee i hope to have it done soon but before i have to finish some with the jutsus.

Here's an idea, since the game is very new, start with the first season Naruto, and start from there. Core things from Naruto, like Simple Jutsu's Simple Kunai's, Simple stuff, then build up to Naruto Shippuden and create Tailed Beasts and Planetary Rasengan. I don't know, whatever works best.

It does look like a good start so far, but I really think you should focus on canon characters. Or at least have a poll or something of the sort.

Unless it doesn't take place in the Naruto universe and thus you want to have control over it, in which case I understand. Still, I think set characters with their own identities is better than a potluck of everything... may be easier to balance too. IDK, it is your game, but I just think it'd be better...

Well actually i didn´t think about a story or something like that i just thought"i love that anime i'd like to create a game based on it's fighting style", jejej that's all maybe i hope to leave everything clear in the next videos talking a little bit more of the gameplay and how it'll work.

Well, I'm not saying about the story, I'm just saying a lot of the joy of games based on IPs is playing as the characters, so like I would rather play as Gaara or whoever than some random ninja. But whatever, your game, I'll shut up if you want me to.

no man just i appreciate every comment, but in fact the game won´t be played with ramdom ninjas you'll be able to customize your ninja that's something that i have in mind :D

Hello,Nice to see another NARUTO-Game has opened his eyes here.

Not bad at least what i could see it at now.

The first and most problem is do the FPS really low as what we saw from the video or it's still on the alpha/beta or even earlier?

There i have had see the KANJIs that "和" and "液" what does they meaning?
am kind confused by those KANJIs.

well the camara movement still alpha and the meaning of those kenjis are peace or blood, it's something related to the game name that i haven't explained yet but i'll do it soon.

Thanks for your explain but there was a problem with the one of KANJIs.
液 is meaning fluid instead of blood and the proper KANJI for it is 血 that is the true one for meaning blood.

well something else to fix, a lot of thanks, i'll do it later jeje,and i forgot to tell you about the fps, no the problem is that i have a kind of ultra slow computer the game runs very well, so i've decided to change the screen recorder, actually i haven't chosen one yet i still testing the best because i want to give you a real experience in the next video update

Ah,now i see.
Will be good to see what would occur on the next update :)