You're a shape-shifting magician from the land of Shiftopia. Your job? Navigate through the shape-shifting, labyrinthine dungeons to reach the end and ensure the legacy of the ancient magicians for the next generation. Don't get ambushed by the threats found in the dungeons though - use your magic to fend them off!

One thing I've become exceedingly bad at is updating games once I've thrown them onto the Internet for the first time. The last time I did such a thing was probably over a year ago. But, starting today, I am a changed man! For I have vowed to complete Shifting Dungeons to a standard that I'm happy to put my name to and watch it run off into the wider world, playable and somewhat consistent. Ahh, games, they grow up so fast. I've been very preoccupied lately with ruining my sleep schedule by doing coursework right up until deadlines (and beyond...), but that didn't stop me tweaking Shifting Dungeons a bit.

Without further ado, it's time to list what's changed! That's what change-lists are for, after all.

There's a handful of new character customisation options, bringing the total of skin and clothing colours available to 8 each. That may increase in the future, but for now I've stuck with 16 total options because the UI feels clean and not overwhelming with choice, while providing a relatively broad number of outfit combinations.
The whole character customisation scene has a background too - I've decided to make it look like the player is getting changed in their bedroom. It's woefully incomplete currently, but it's a start. 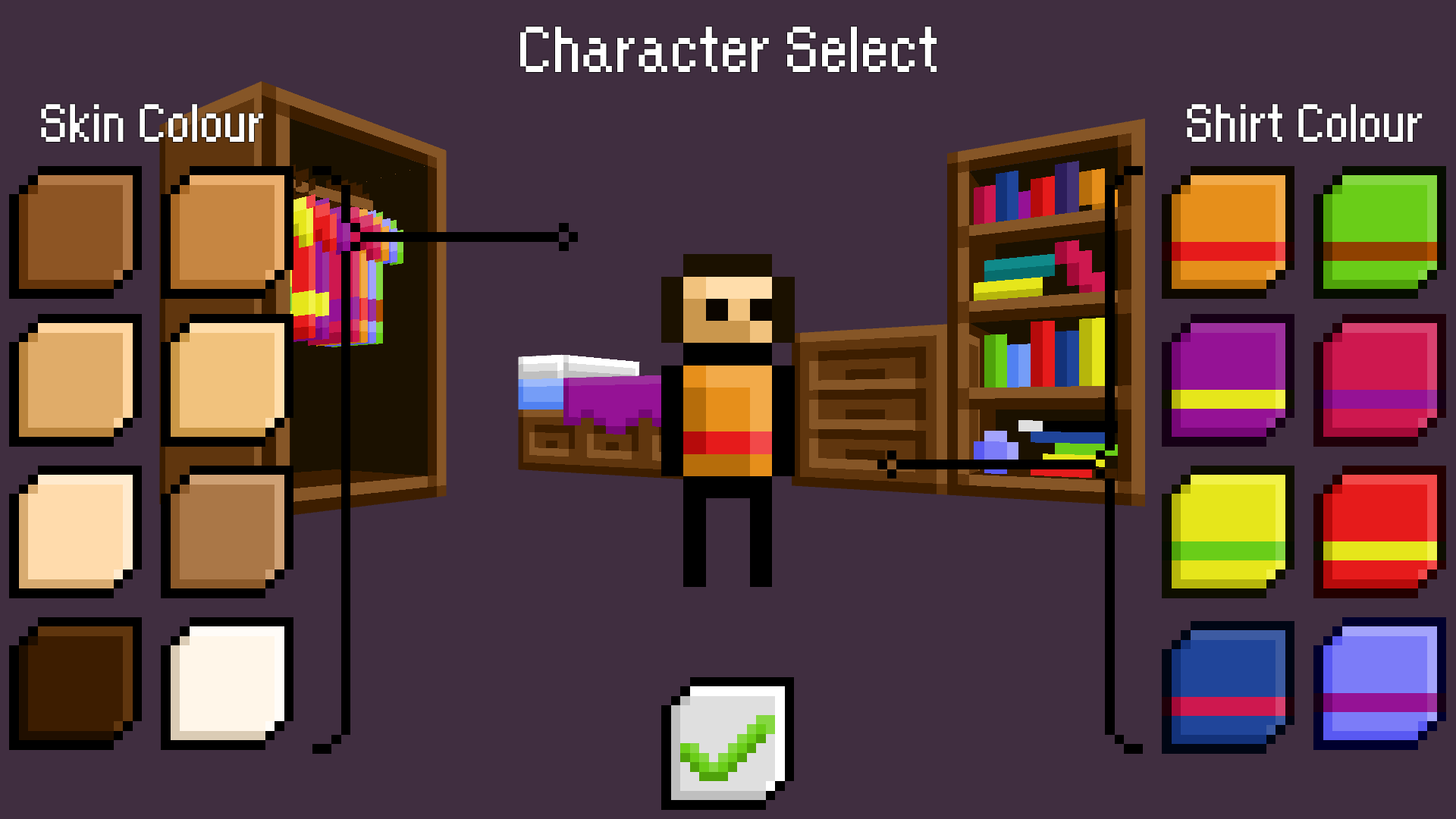 The bare basics of an options menu are also now in the game. Most importantly, this menu has an exit button - something I'm very good at forgetting to add. Now you don't have to Alt+F4 out of the game or use Task Manager! There are sliders for adjusting music and SFX volume and for changing text speed, but they don't do anything right now (especially since there's no music and next to no text). However, the sliders' values are accurately stored, so it's a start! I'll probably have them fully implemented by next update. 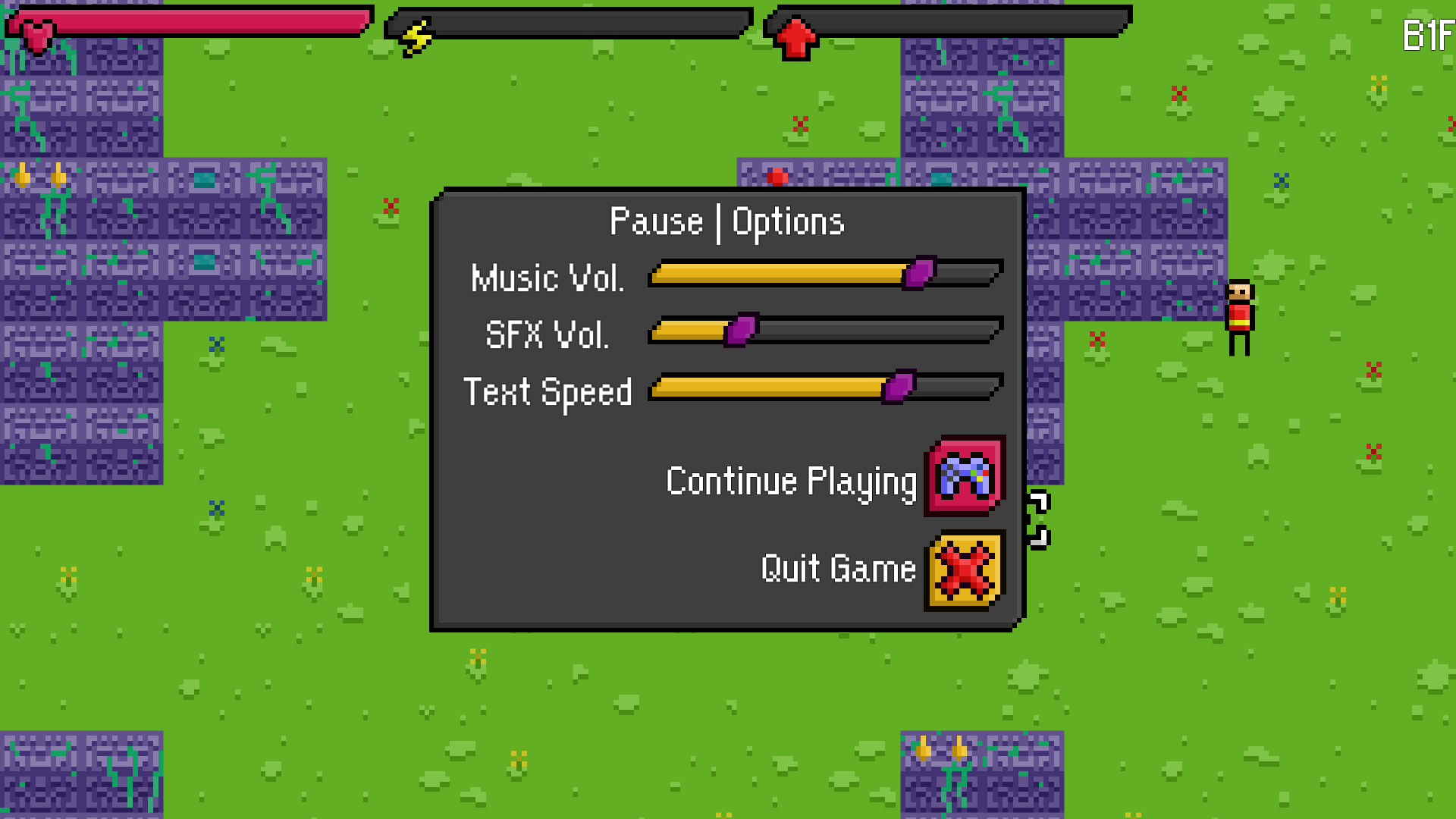 I've also started work on a cutscene for the start of the game. It'll be rather short and serve only to introduce the concepts and backstory of the game in a better way than the Ludum Dare entry version handled it - a wall of text. Instead, short sentences accompanied by pretty pixel art will probably work better. Similar cutscenes will appear during major story arcs, but since there's no story right now, this is the only cutscene implemented. 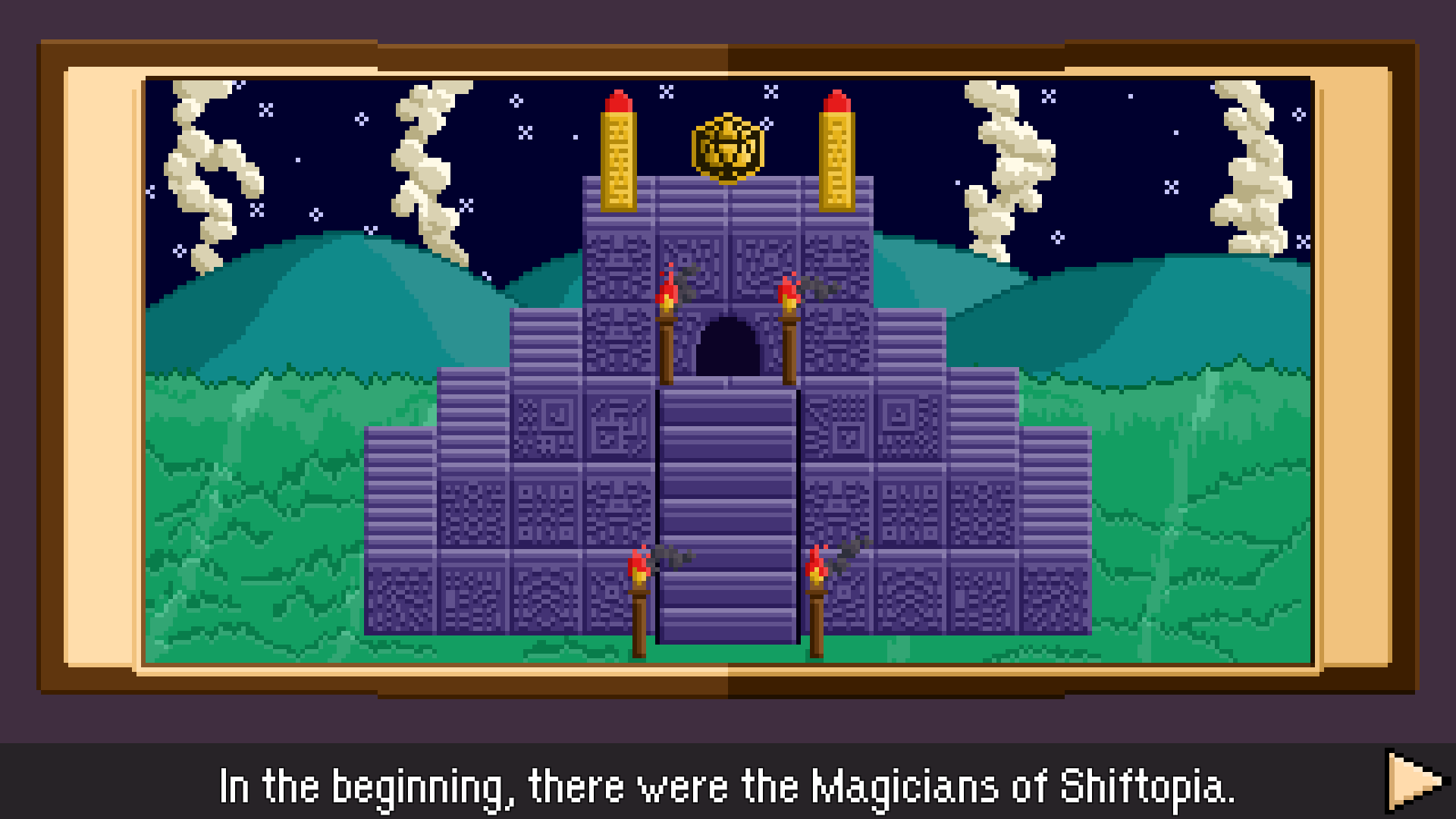 Any controller that supports X-Input should work with the game. I say should; I've been testing the game using a Wii U pro controller and an adapter that allows it to mimic an Xbox 360 controller (which uses X-Input), so hopefully it also works with other X-Input devices, although I can't promise anything will work perfectly. The controls are fairly simple and you shouldn't have any trouble getting to grips with them. However, there are no in-game instructions for controllers, so here is an image detailing how the controls work (which I probably could have just included in the game anyway): 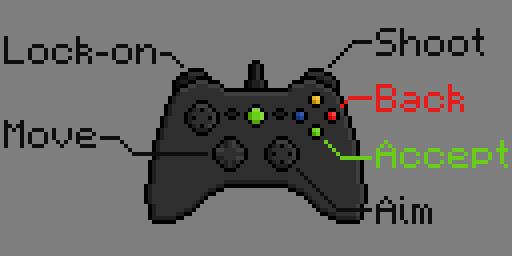 To make it easier to take down baddies, you can now lock onto them. On a controller, aim in the general direction of the enemy and press the left button; using a mouse, press the right mouse button. It's the same button to de-lock (lock off?), but make sure you're not aiming at an enemy when you do it or it'll just lock onto the new enemy. Unless that's what you wanted to do, then great, that's how you do that. When locked onto an enemy, their health will appear next to them and decrease in realtime, plus your bullets will fire straight at them, so you can see why it's a handy feature. Plus, when you kill a locked-on enemy, it'll automatically lock onto any nearby enemies. To aid your aiming, there's a second cursor - the orange one is for locking on while the white one is the mouse's actual position. I've yet to implement the white cursor for controller input, but it'll be in the next update for sure. Oh, and the cursor sprite and animation is a lot fancier, too. 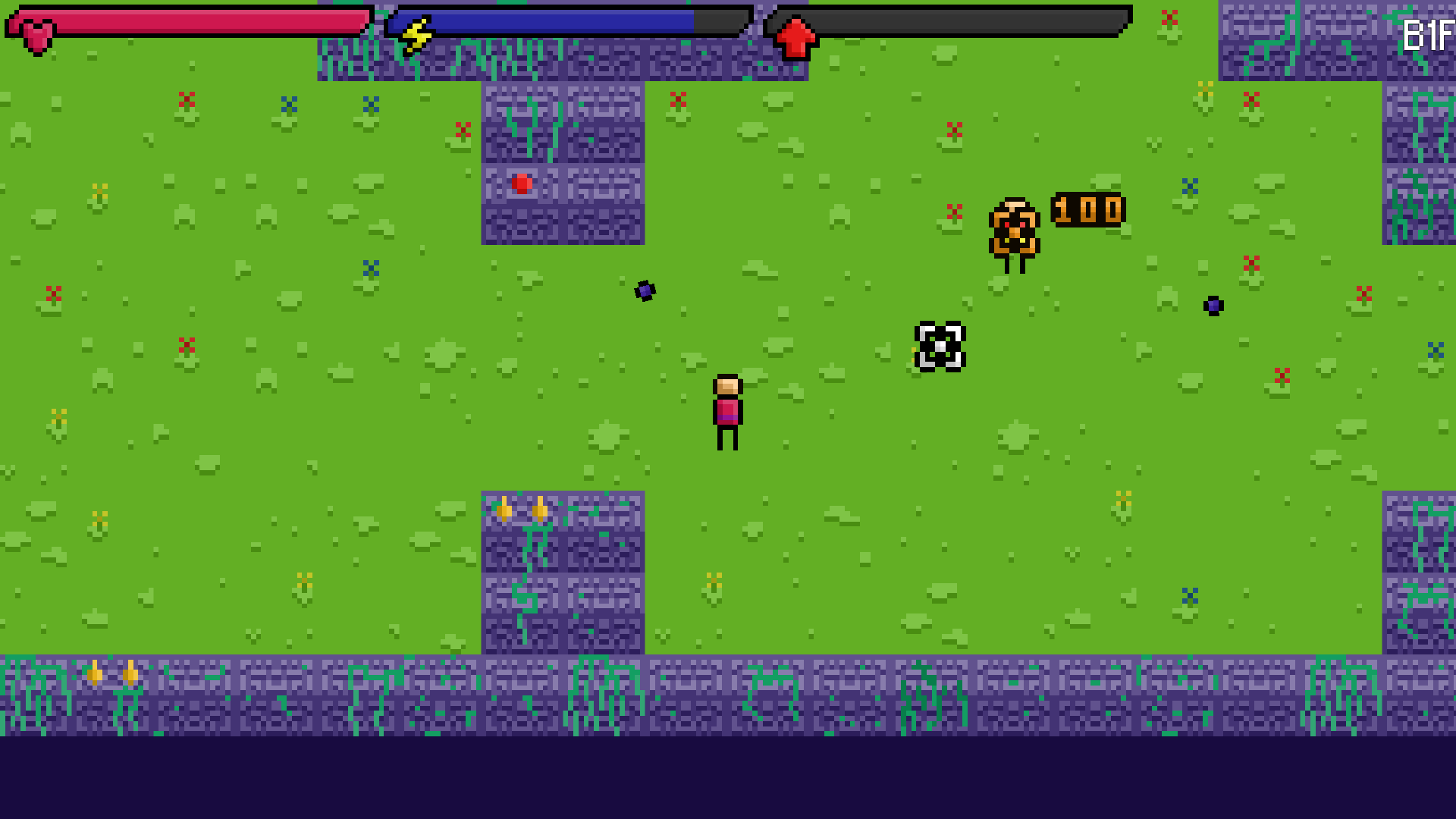 The biggest gameplay change is possibly the addition of the Energy bar. There is a distinction between powerup energy and general energy, hence there two energy bars; the leftmost one, with the thunderbolt icon, will decrease when you fire bullets or slow down time and replenish when you move. The one on the right, with the arrow icon, starts off full when you pick up a powerup (try saying that five times fast), then slowly falls as you move until it reaches zero and the powerup expires. Health replenishes as you move as before, but at a slower rate, plus the UI is more reactive; being hit makes the health bar shake, and having low energy makes the energy bar shake more, the lower energy you have. Staying stationary also no longer stops time completely, but it slows it down a lot.

Shooting mechanics have had a bit of a mix-up too. Your bullets and enemy bullets don't collide any more, as it provided an easy way to get rid of enemy attacks and there was no incentive to use the time-slowing mechanic to dodge bullets. However, you can now hold down the shoot button to start a hailstorm of bullets and wipe enemies off the map without me being liable for loads of repetitive strain injury lawsuits! To balance the increased shooting speed and the ability to lock on to enemies, your bullets do half as much damage, although in the next update I hope to add some system such as different bullet types that'll let the player (and enemies) do more damage.

A few other changes are there, namely that rooms are much larger and the camera is zoomed out so the player can see further. It makes it slightly less confusing when you can hear you're being shot at, since you can more easily see where it's coming from by virtue of the threat actually being on-screen or only just off-screen, not a million miles away.

Yay, low-quality GIFs! Blame my slow computer, it's the best it could do.

You know that game-breaking bug I wrote about in the last blog post? The one that means you couldn't get past the first dungeon because you're unable to move on its final floor? That's been squished. There were also a couple oversights where the game would sometimes skip to the final floor when there was supposed to be another standard floor before it, but now the floors act like they should.

There's only one that I've actually found and can remember, and it's not hugely important: on the character select screen, the player's face appears blank. That's because technically he's looking upwards, and due the the fact the player's at an angle in 3D space, the game doesn't recognise the mouse position correctly and doesn't face it. If you press the right stick on a controller, the player will face the correct way, but unfortunately the right stick's rest position has the player looking upwards anyway... Swings and roundabouts, huh? 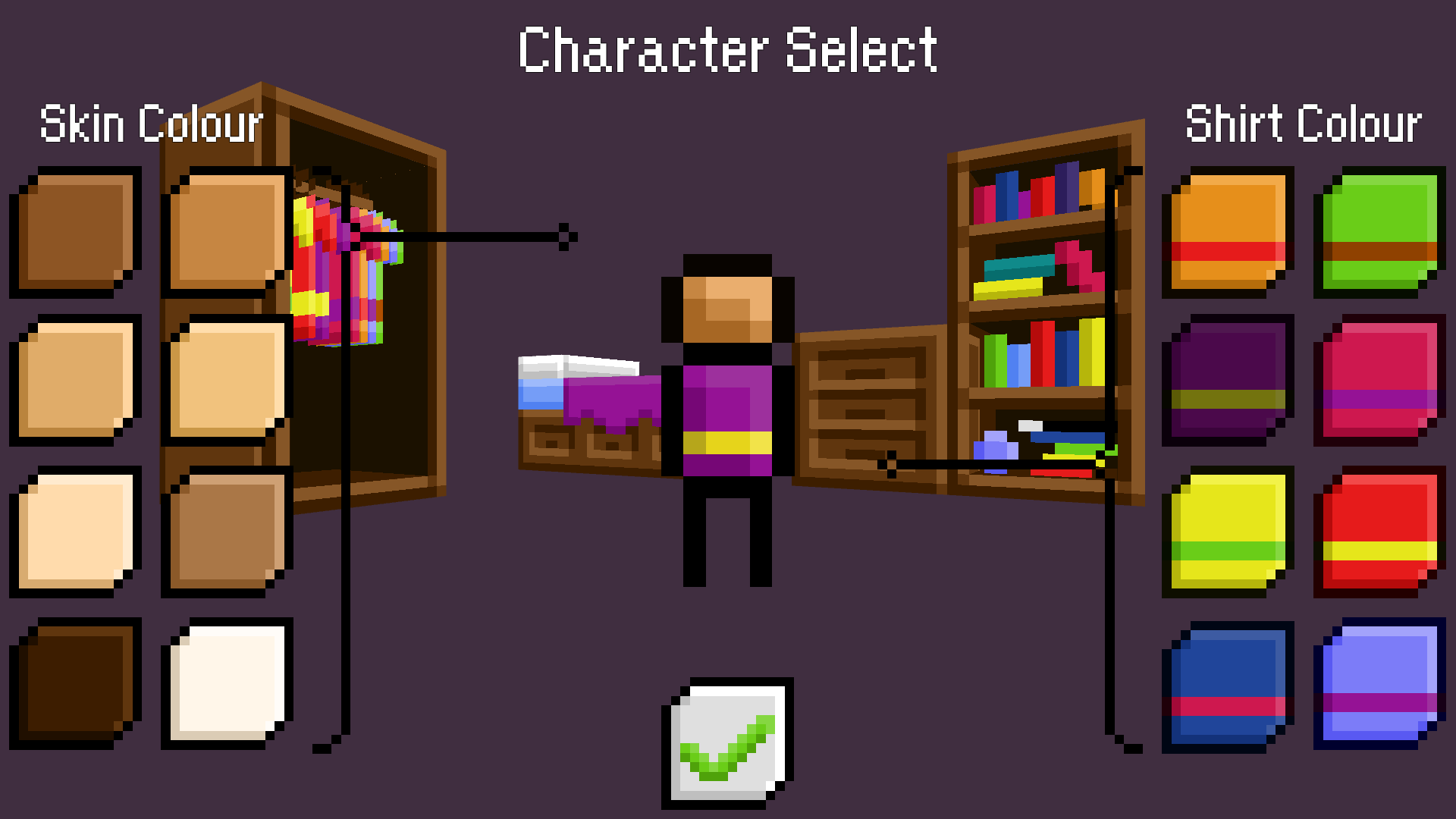 Meet the very introverted and shy hero of the game.

Most of all, I hope to implement more enemy types. Right now, there's only one type, and they share the same sprites as one of the character customisation options. They all share the same terrible AI too, so I'm going to at least attempt to work on pathfinding and give some enemies different attacking styles. I'll also try to make more dungeon types and give more variety to the dungeons themselves - different sizes, shapes and maybe obstacles inside the rooms. Plus, I'll try to finish the powerups that were originally planned for the Ludum Dare version and implement new ones - the 'shapeshifting' aspect of the game is a little bare currently. Finally, I still need to balance the floors' difficulties and spawning rates of enemies and powerups, since it's still very imbalanced.

A write-up of my thoughts on my Ludum Dare entry, Shifting Dungeons, and what I intend to do for the upcoming versions of it.