What is Risk of Rain?

Risk of Rain is an action platformer/adventure game with roguelike elements.While we don’t want to spoil the story, we can let a few things through! The game is set in the distant future, where space transportation is common. Space trains carry passengers and goods all across space. A particular space train, however, had some very special cargo. Through a series of unfortunate events, this space train gets shot out of orbit and crash lands on a mysterious planet.. with one survivor.

The big feature of our game is the randomized elements. The position you spawn on the map, which map you spawn on, the location of chests, enemy spawns, item spawns and more are all randomly chosen by the AI Director! We also have a massive amount of content in our game: we have 100 unique items planned, all with interesting effects. No +HP or +DAMAGE, but chance to spawn missiles and stop time. You have the option of choosing between 10 characters, all with their own different moveset.


What makes Risk of Rain unique?

Another thing that’s important in our game is that as time increases, so does difficulty. Represented in a bar on the HUD, every minute increases the enemies’ power and spawn count, developing a great sense of urgency.


Tracking your progress in Risk of Rain

Through the Item Log you can see what kind of cargo the space train was carrying, along with a variety of information of the items you’ll be using in your journey. The Monster Log is similar to Olimar’s Log in Pikmin or a Pokedex; after collecting logs from monsters, you can read all about their behavior, health, damage, and more, along with an accompanying picture. 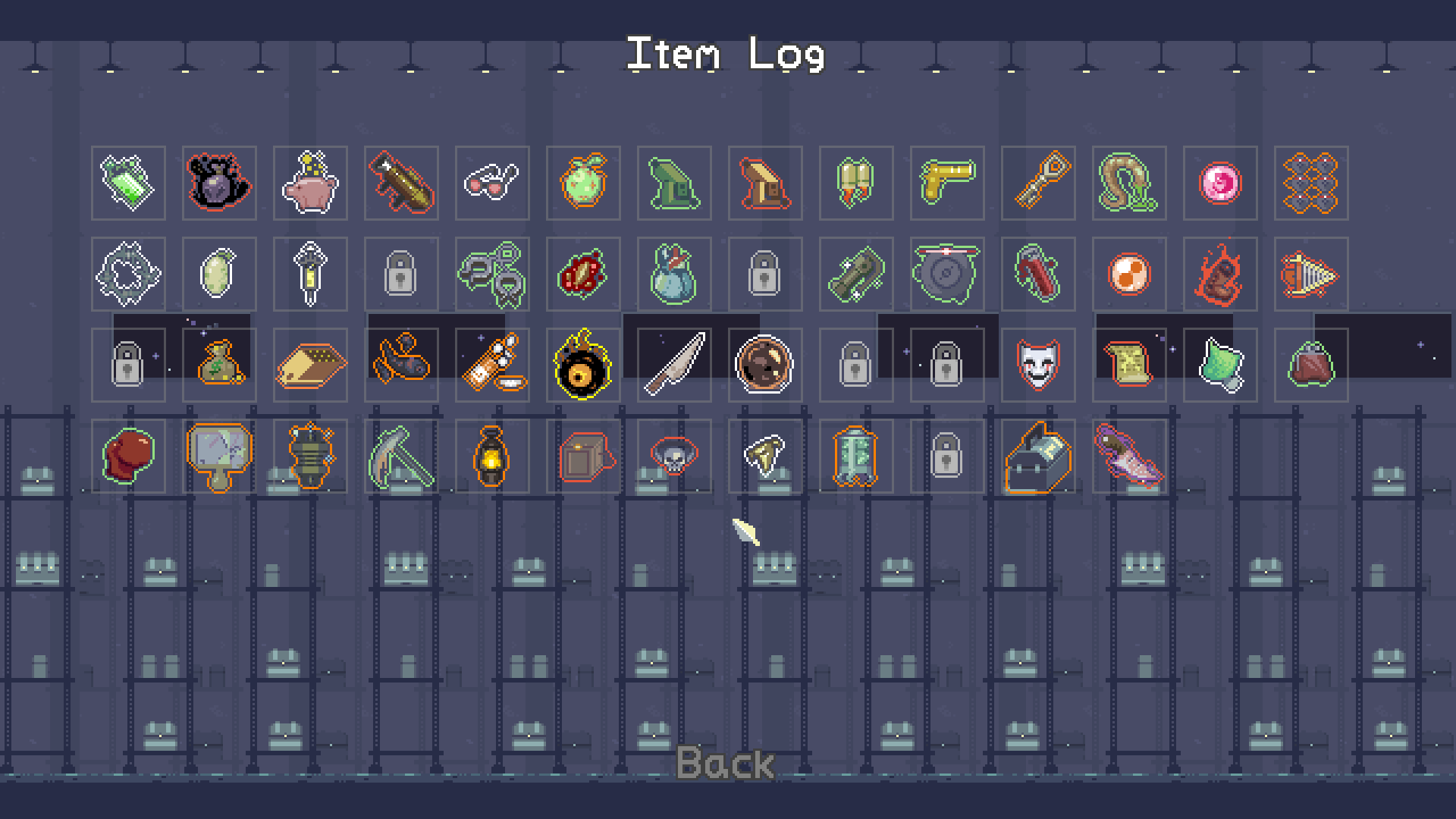 Battle through hordes of randomly spawned monsters and bosses

The game is run by a hidden Director, who has a ‘deck of cards’ of monsters he can spawn. The Director will randomly draw a card, and then spawn as many of those monsters as it has points available to it. If the Director has sufficient points, he can spawn a boss onto the field! Not only that, but the Director can upgrade his spawns to elites with enough points, giving them random abilities such as faster speed, electric elements, or permanently leaving a fire trail. Elite bosses all have their own custom abilities unique to each boss.


Collect drones to aid you in battle

Drones, like chests, are randomly distributed throughout the map. The unique thing about drones, however, is that they have their own healthbar and can be lost, unlike items. They float around you and are, in my opinion, quite adorable! At the moment we have a basic drone, who floats and shoots nearby enemies, a healing drone, an assault drone, a missile drone, and a laser drone. These all have their own unique models, sounds, and behaviors!


Collect over 100 items and powerups that drastically change gameplay

There are two different kinds of items; passive items and use items. Passive items, which are split up into 3 categories of power, are always active.Some examples of passive items are the ‘Fireshield’, ‘Infusion’, and ‘Brilliant Behemoth’. The Fireshield causes your player to detonate when receiving heavy damage, hurting nearby enemies and knocking them away. Infusion causes your maximum health to grow for every enemy killed, and the Behemoth causes every single one of your attacks to explode! All passive items stack, so if you had all 3 of those items, getting hit would result in an explosion, which then explodes further, then gives you health.Use items are a different kind of item; you can only hold one at a time, and it goes on cooldown when used. Some examples of use items are the ‘Missile Box’, which sends out 16 missiles to hunt down enemies, and the ‘Jar of Souls’, which duplicates all enemies on the screen as a ghost to fight on your side.

Most games have very non-intuitive controls and game rules. You shouldn’t have to read through the wikipedia to learn all the hidden rules of a game! The game in its current iteration is very easy to understand; you shouldn’t have to fight against the game design. We intend on making the game playable by anyone, but only master-able by a few. Intuitive does NOT mean casual or easy! Most of our fanbase will attest that the game is quite hard.

DEADBOLT is out now!

DEADBOLT is an extremely challenging stealth-action hybrid that allows you to take control of the reaper to quell the recent undead uprising. Play and complete missions given to you by the mysterious fireplace as you become the avatar of death. While the reaper has an impressive arsenal and skillset to kill the undead, he has one flaw - he dies in one shot... leaving you with no room for error.

• Complete over 25 extremely challenging missions
• Unlock and obtain over 30 weapons, ranging from a reaper's scythe to an automatic grenade launcher
• Fight over 35 enemy types, from zombies to vampires to bosses and more
• Choose your playstyle: quiet assassin, loud one-man army, or anything in between
• Gib them all! DEADBOLT's dynamic gore system guarantees that all evisceration leads to satisfaction
• Choose your own way to complete a mission - no mission has to be completed in one way
• Accomplish a variety of objectives, like assassinating gang leaders and investigating mysteries
• Multi-genre soundtrack created by the talented Chris Christodoulou of the Risk of Rain OST

Hey! Here is the first official trailer for our new game DEADBOLT. DEADBOLT, made by the same developers of Risk of Rain, is an extremely challenging...

Risk of Rain Launches on Steam!

Risk of Rain launched on both Steam and Humble Store on November 8th, 2013. It has been a long road for our first game but it has finally made it to Steam...

Risk of Rain will now officially support online co-op! Just like local co-op, team up with up to 3 other friends from around the world and try to survive...

The stable version of the mod. Requires the Risk of Rain ModLoader.

The stable version of the mod. Requires the Risk of Rain ModLoader.

DEADBOLT, made by the same developers of Risk of Rain, is an extremely challenging stealth-action hybrid that allows you to take control of the reaper...

The demo is out! This marks the last free version to be released and also doubles as a demo of our game. Outside of major bug fixes, any release from...

The demo is out! This marks the last free version to be released and also doubles as a demo of our game. Outside of major bug fixes, any release from...

Updated Alpha Version 0.29.2.2 for Risk of Rain, our roguelike-like in the making!

Fantastic and punishing game. It is crazy how something so simple-looking can keep you occupied for over 100 hours. Easily the best price to replay-ability ratio I have ever had the pleasure of experiencing.

Can't wait for a sequel, and here's hoping for twice the amount of items in RoR2.

AND twice the amount of heroes...
I would love more possibilities!

Lovingly crafted and just random enough without being so unpredictable that the quality of design is lost. Haven't decided whether I prefer this in single or multiplayer - in mp it's a shame if one player dies they are out for the round. Here's my multiplayer video: Youtube.com

Is this a good place to bug report? (best game ever)

This is hands down one of the most fun indie games I have ever played. I recommend buying it.

I think I should buy it and play as soon as I can!! It looks an awesome game.. Game Maker is really powerful though! ;)

... This game is my Binding of Isaac. That said, LET THE SERIES BEGIN! Youtu.be .... Aslo, THIS GAME IS AMAZING!

Please make a mac version IT will make MONEY

You know that a game is good when you can't stop playing it! Games like Risk of Rain show that when you combine pixel art and modern day technology, you get the outcome that is amazing in all of it's glory. Huge amount of replayability, and the difficulity keeps me going. unique class designs, awesome secrets and the co-op that forces teamwork to the max! That game is worth every cent :) Keep up the good work and take care :)

The graphical style and music illustrate a fantastic setting, the soundtrack captures very well the feeling of loneliness the player adopts, the monster and item logs are very interesting, there are many characters with diverse abilities and strengths, the gameplay is very smooth and exciting, the difficulty is very present but not unfair, and the game is long enough but also short enough that it's easy to play over and over again.