Psychic Isolation is a horror survival game set in the current day with an emphasis on character based story and unobstrusive gameplay.

The story itself does not evolve around the protagonist of the game but about the antagonists.

As you explore your home you unravel a complex and intricate story surrounding the main character and their immediate family. When danger arises you'll have to hide in different rooms, barricade the doors, and stay quiet to avoid raising attention.

As you play, you will learn about the thoughts, feelings and emotions of those who now try to kill you.

The demo is currently undergoing a heavy design update and bugfixes, which is why it will be available for free in june again.

If you prefer not to get scared and enjoy exploring the story, the game also features a mode without scares.

“See you in a week”
Those were the last words you told your parents before you left for Spain. They kept running through your mind as the plane landed in Germany. Had it only been a week? It felt like longer, and you were really starting to miss them.

You see a huge crowd as you leave the plane and head towards the terminal to grab your luggage. Many of them look exhausted, and you spot a few propped up on their luggage trying to catch some sleep. Others look exhausted more emotionally than physically, crying from a desparate attempt to make sense of the world.

After fighting your way through the crowd you find a reasonably comfortable place to sit on the opposite platform and wait.

Luckily a group of people headed the same direction offers you a ride. They drop you off at a bus stop near your home.

It was a long journey so far, and you were tired from the long flight to begin with. Unfortunately for you the busses don't run this late, so you have to make the last few kilometres yourself.

As you near your home you realize you haven't gotten a call from your parents yet, despite being much later than you thought you'd be.

It's four o'clock in the morning when you see your home in the distance, and you hope to finally get some rest.

Rest you weren't meant to get this night...

Psychic Isolation started as a one person project in 2015.

The goal was to tell a story focused on the development of the people that are trying to kill the protagonist.

In August 2016 we hit Steam greenlight and were very well received.
Due to this, we are now a 3 person team with external artists also working on the game.

A new trailer will be coming up, an original soundtrack, new art, very lively surroundings and more.

There are five episodes planned for Psychic Isolation. The demo functions as the first and most important one as this one decides which story branch you will enter.

Depending on the branch you will be playing, the text and surroundings and gameplay mechanics will change heavily.

One of the branches will be less horror focused and instead has its focus on the story of the events surrounding the protagonist.

The other branch is heavily atmosphere and horror focused.

Every episode past episode one is aimed to contain about one hour of gameplay per path, each episode currently takes about 6 months of development time. 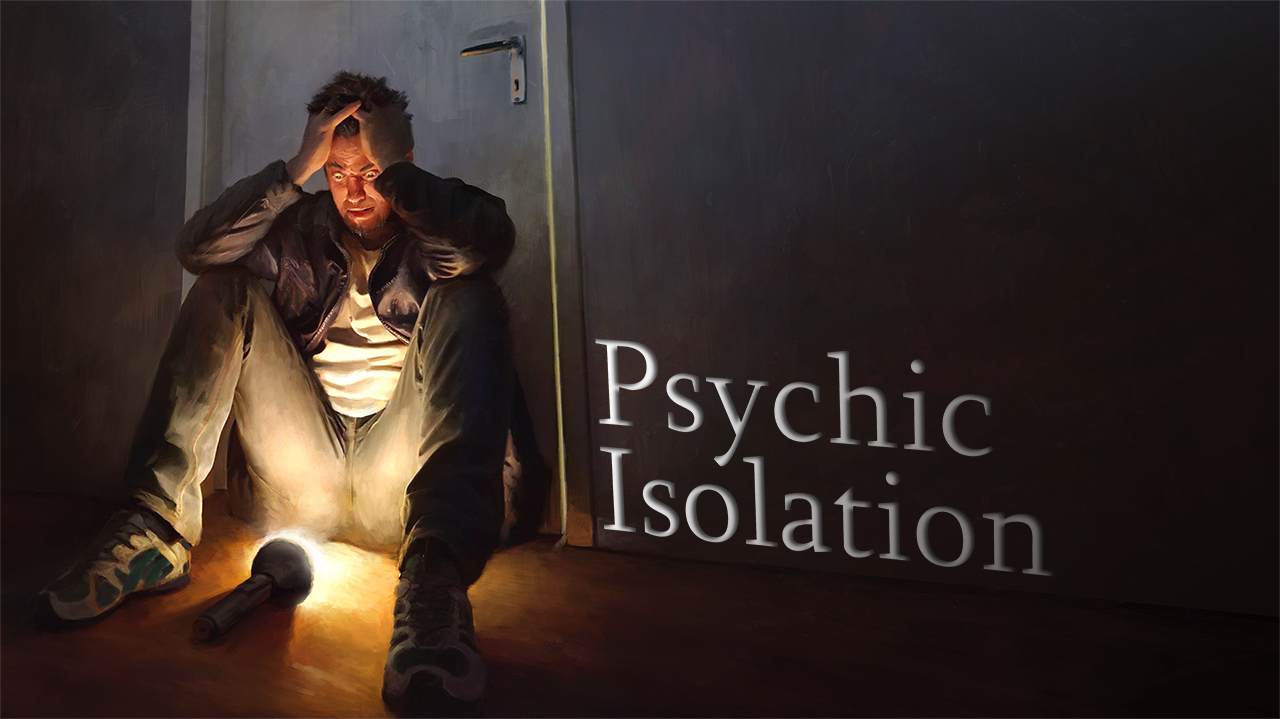 In August 2016, I finally made it.
I had a demo ready that was playable and that I thought would be able to convey my idea.

And guess what: Right when the day came for me to submit it to greenlight, I was about to delete everything.
It was so bad in my eyes.
It didn't work out as I wanted, it didn't feel complete and the story felt rushed.

Luckily I had a couple of people to rely on who told me to submit it to Steam Greenlight... and so I did.
This was the probably worst night I had in the last two years...
I couldn't really sleep and whenever I closed my eyes, I saw the comment section raging about how bad of a game it was, followed by youtubers playing my game and pointing out how „shit“ it was.

I got up and refused to check the submission over night...

As I got on my computer I thought I'm dreaming.

Hardly any bad comments – some criticism but overall very positive.
Sure, I put it up on twitter for some of my audience to maybe push it a bit – and this was my straw to grab on.
I thought that it was only pushed so much cause the people on twitter helped me. 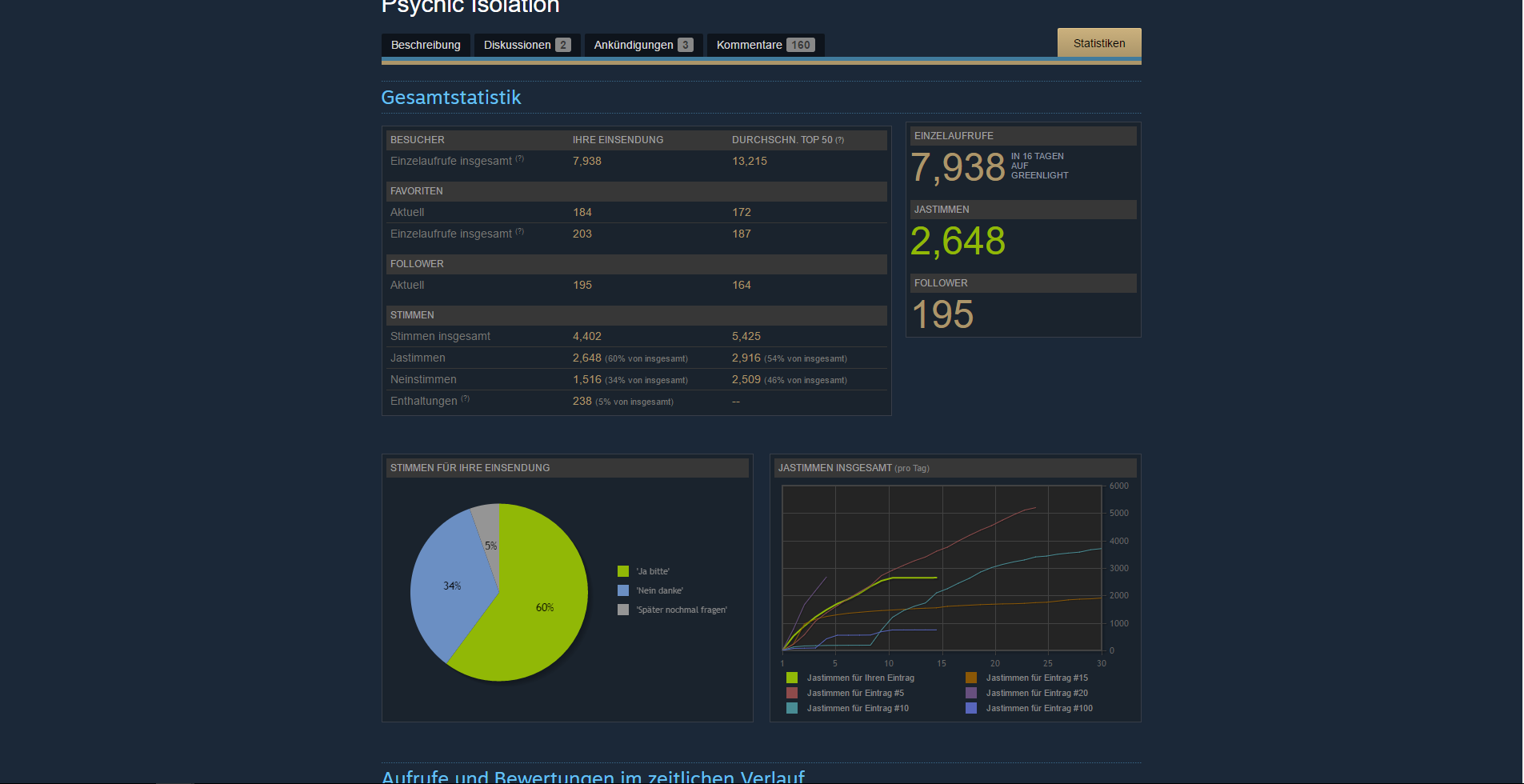 (Image of the stats after I got greenlit in german... not the best stats, but a decent start)

Over Gamescom (German Games Convention) 2016 a friend of mine (Luigikid Gaming) made a video about the demo...
His audience is pretty different from mine... and heck, even the comments there were positive.

Within less than 48 hours I managed to hit the top 100 – and within less than 10 days I was greenlit.
I made it...?
Am I gamedev now?
Did I finally understand how gamedev works?

From here on things went pretty positive.
I had the idea of starting a kickstarter campaign along with the greenlight submission.
However, germany doesn't really use credit cards, so I had no way of setting this campaign up and decided to fund everything myself. 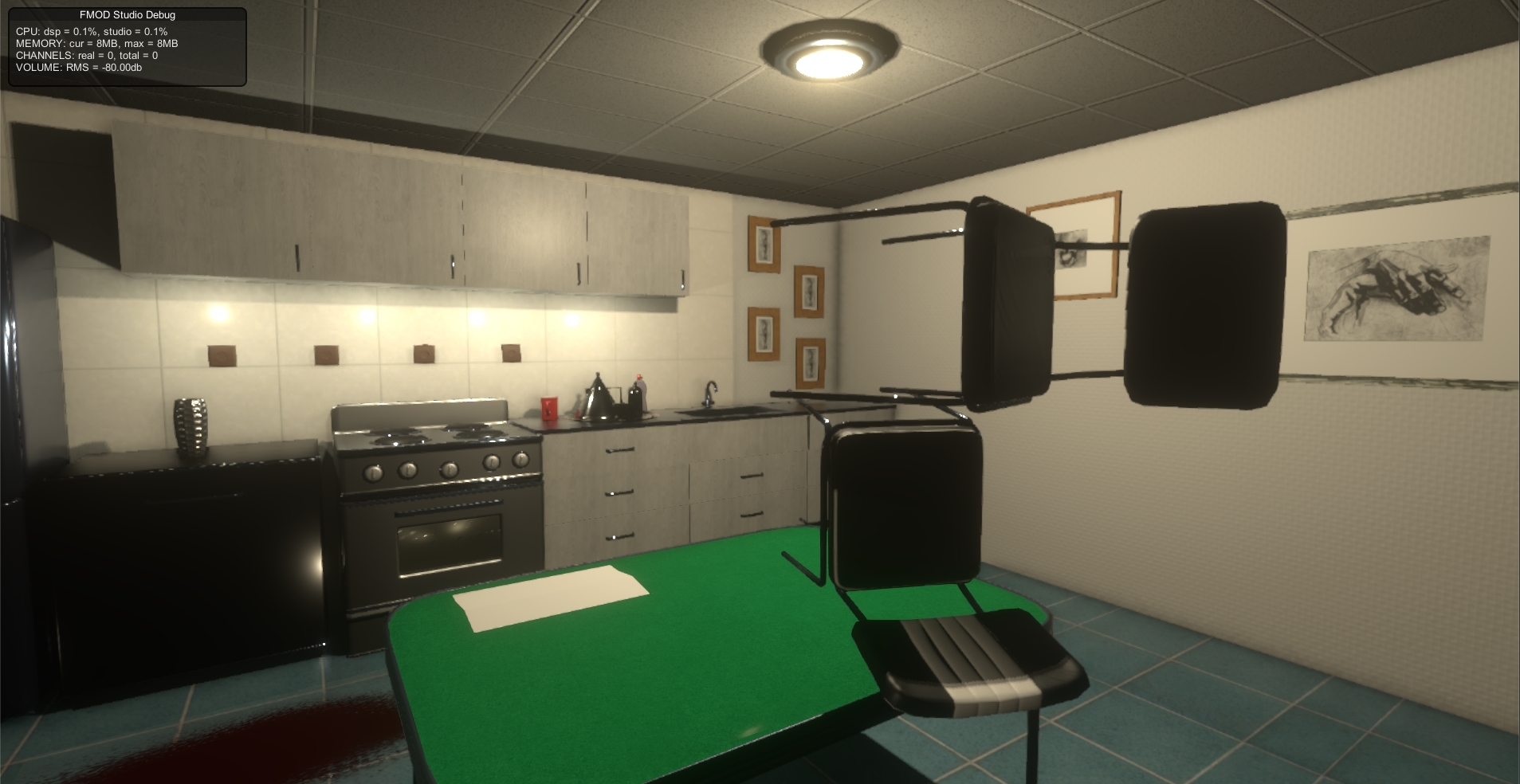 (Picture of me working on the dragging system again and trying to make the interior look more lively... it's all gone now tho as the entire interior structure changed)

And heck, things have changed.

Now we're in the present.
Episode one is being remade again (Not everything got deleted tho) with a complete redesign, runs faster than the demo did and Episode 2 is also in the works.

I went all in with everything I had and have.
Streaming isn't my focus anymore and I'm using all my power for this project.
I asked / hired several artists (Audio, Voice and art), trying to achieve the highest quality end product I could possibly go for.

And as we are now in the present – We are hitting Steam Early Access on July 25th on which we will hand out Episode 1 for free as a demo and Episode 2 for a little price for those who are really interested in the game and want to support us a little early.

Regardless – this is the end of the blog series „From Bad to... not so bad“ - however, we will continue our dev diary as usual in a 3 day interval.

Thank you for reading, hopefully I got you a little interested.

Why is there no monster in Psychic Isolation?!

A question I got early on after submitting my game to Steam Greenlight was, why I decided not to put a terrifying monster into the game despite it being...

When you realize that your game could potentially end up on those lists of "Worst Steam greenlight games ever", you might wanna consider changing your...

Introduction to a game blog including the ups and downs of being a part time first person horror developer ... the probably most uninnovative genre there...