Phoenix Labyrinth is a Horror Survival, Adventure, Puzzle, First Person Shooter Game focused on a story of a mysterious place that appears to be a labyrinth. But somehow, it feels like a lot more. Discover the secrets hidden beneath this unusual and mysterious place. The game's objective is to be Adrenaline-Activating, Horrifying, Shocking, Surprising, Action-Packed and more! The game is still under development and is currently on Pre-Alpha. (Available on itch.io)

After quite a long wait, we have released the Technical Alpha version of the game. As we wait for Desura's approval, we have decided to release the game on itch.io to allow aspiring Pre-Alpha players to finally gain access to the game.
Current features of the Tech Alpha is written on the game's page. Please make sure that you read them accordingly as this version is the earliest release of the game with the main purpose of letting players help us in its development. 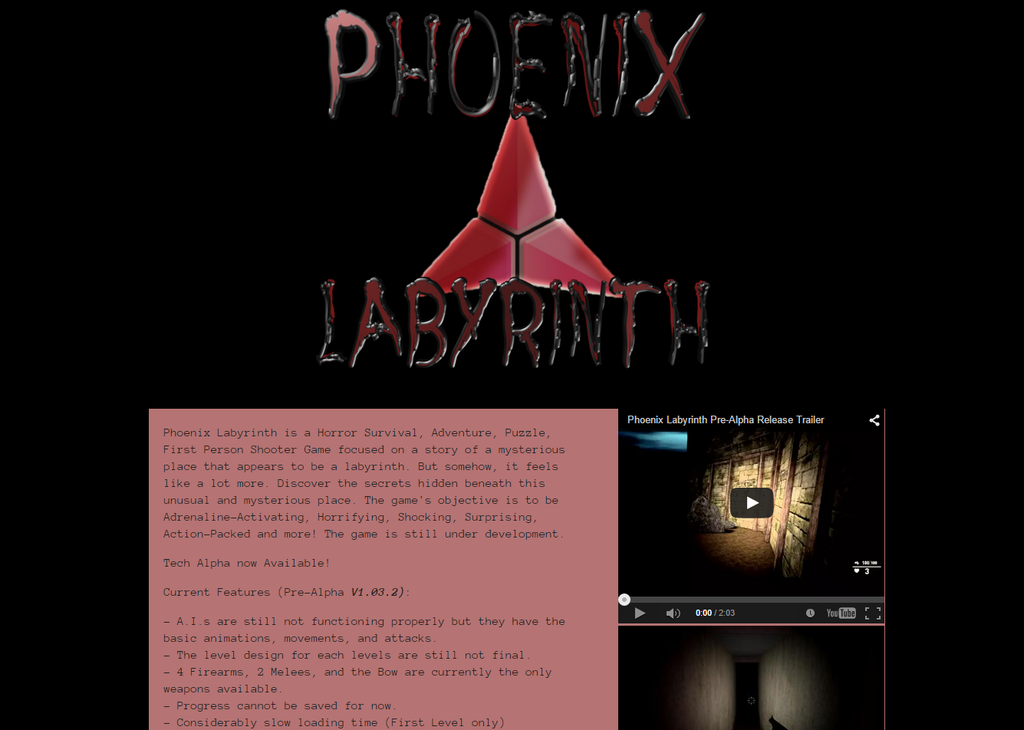 In-game note:
Level 2 requires you to crouch in order to access the main door.

For feedbacks and suggestions, you may email us at phoenixg.games@gmail.com.
We will soon open a public forum for that purpose. Sending an email is just an alternative option as we wait for the official forums.

Thank You for bearing with us these past few weeks filled with delays. We hope you understand.

A new trailer has been released! Pre-Alpha Version Anounced! and current features are listed!

We are officially announcing the release of the Pre-Alpha Version of the game, Made a New and Improved Logo for the game, and released an official Teaser...

The secrets of the Labyrinth remains a mystery. Will you be able to unlock it? - New Screenshots Available!

Thank you for waiting patiently. The current Tech Alpha Features are listed on the game's page.

I know that the announcement has been released but please bear with us.
The release on Desura will be delayed by a few hours but can reach up to a few days, we will update you in the comment section.

Awesome! I will apply to play the alpha if you guys ever decide to make it available. :) Looks very neat!

Pre-Alpha Signups closed a week ago. We are truly sorry, but right now we are running short on funds to support the game and therefore can no longer release free Pre-Alpha keys. Only those who were able to sign-up within April 9-April 30 will be given Keys.
Once the game is available on Desura, it will be sold for a considerable price that includes 3 levels and future updates. We apologize for not closing the sign-up form properly which caused confusion among the community.

Okay, thanks for informing me. :) Will wait for it on Desura then. :) Good luck!

Estimated Release date updated (Pre-Alpha Release). It will be released either earlier than the said date or possibly later.

how can players enter to have a chance to play the alpha?

Please note that the game is not yet certain about sending Alpha Copies but if the decision has been made, those who signed up will get a chance to Test the game.