The original Indie Cult Classic returns fully restored, and more evocative than ever.

Pathologic Classic HD is the Definitive Edition of the original Cult Classic Psychological First-Person Survival game. The game represents a unique and unforgettable experience as it transports players in a weird town which crouches, ominous, in the far reaches of an ancient steppe. It was once a small drover settlement, huddled around a monstrous abattoir—but something about the butchery it was near has changed it. It has developed an odd social structure over the course of several generations. It could have quietly continued along its weird way, but a sudden outbreak of an unknown and inevitably lethal disease has decimated the citizens. Prayers did not help. Science did not help. So, finally, they have turned to outsiders for help: three of them enter the town in hope of finding a cure or—failing that—an explanation. The first outsider was a ruthless investigator, assigned by local authorities. The second is a far-sighted Ripper who has used his extraordinary abilities to gain a reputation as an ingenious surgeon, who has come to the town in search of his father's terrible heritage. The third—and last—outsider is an eccentric girl rumored to have mystic healing abilities; she may become the town's salvation were it not for the constant fear that plagues her, the memory of the horrors of her recent past.

On the surface, Pathologic is a first person horror adventure game where you control one of three "heroes." Dig deeper, however, and you’ll find an experience that will affect your emotional and psychological state. In the world of Pathologic you’ll find yourself in situations where morals and good deeds are meaningless in the face of raw despair and endless need. Talk to the denizens of the town and decide for yourself if you wish to ease someone else’s pain or save every bit of precious medicine to protect yourself from the invisible and inexorable plague. Become witness to the miasma of horror as the plague begins to overcome the town. 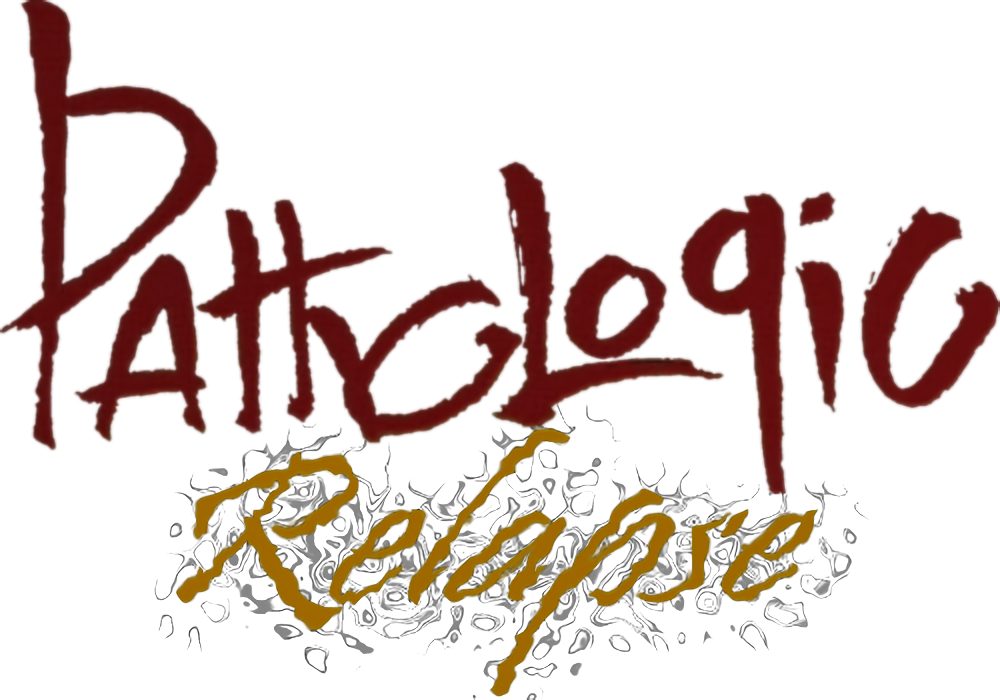 Hey all! I'm back with another first for ModDB - this time, the first mod for Pathologic Classic HD! Introducing - Pathologic: Relapse, an overhaul for Pathologic that aims to improve visuals of critical items in the game alongside updated sounds and more. This has been the product of a number of months of work by a few people interested in polishing up this cult classic.

Credits right off the bat go to the following:

Let's get into the details!

In deciding where to put time sprucing up visuals, the firearms in the game seemed like the obvious choice. They're some of the most notable items obtained and getting them felt as if it could be more rewarding to the player. All weapons therefore received a visual upgrade, as well as muzzeflashes for the main three weapons.

-The revolver has had a reskin, doubling the resolution and adding in lots of updated details sourced directly from the real life weapon (a Webley-Fosbery)

-The rifle has been reskined with double the resolution, AI-upscaled textures, and revised details with real reference from the real-life weapon (a Berdan No.2 Carbine)

-The shotgun (in Relapse, we've nicknamed it the Samopal after the files in the game as it has no real-life counterpart) has had revised textures - AI upscaled, with added engraving and shotgun shells retextured from real-life 16 gauge shells. Also, added detail overlays to enhance the detail on the texture!

-The double-barrelled pistol (a Remington Model 95) has been retextured, with AI upscaled textures and improved details from reference images of the real-life equivalent

-The revolver, rifle, and shotgun have all had their muzzleflashes updated to better fit the graphics of the game, as well as the rifle receiving its own unique muzzleflash since it previously shared the revolver's 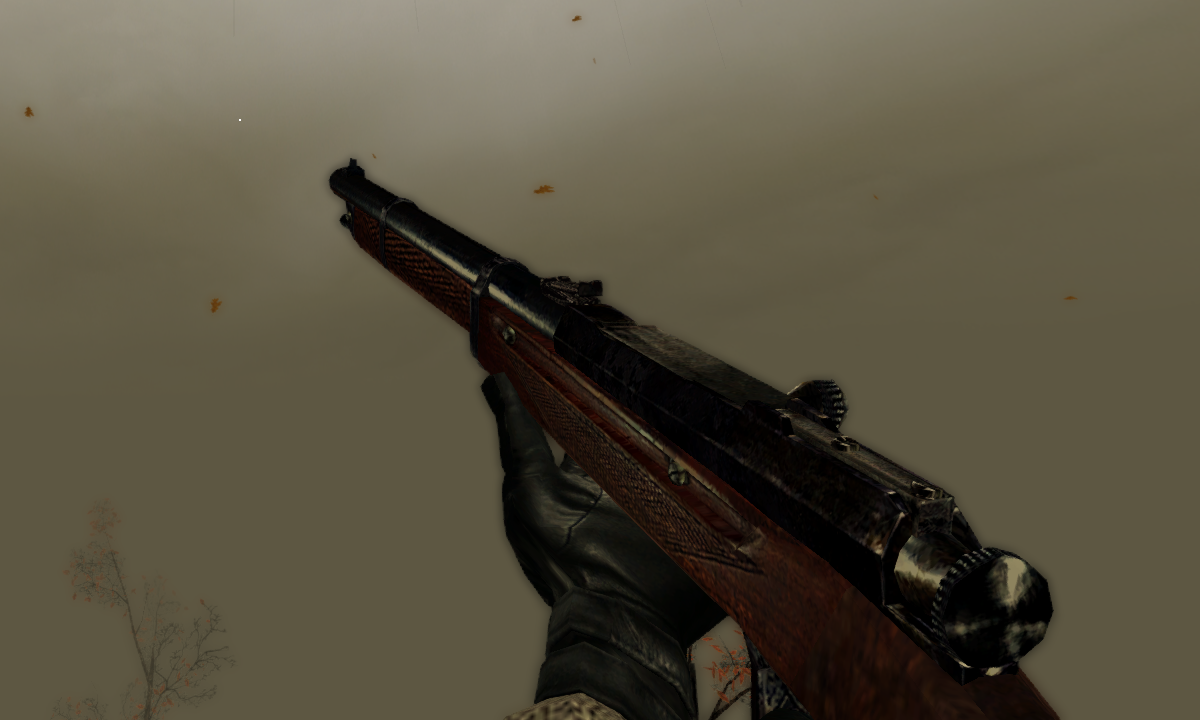 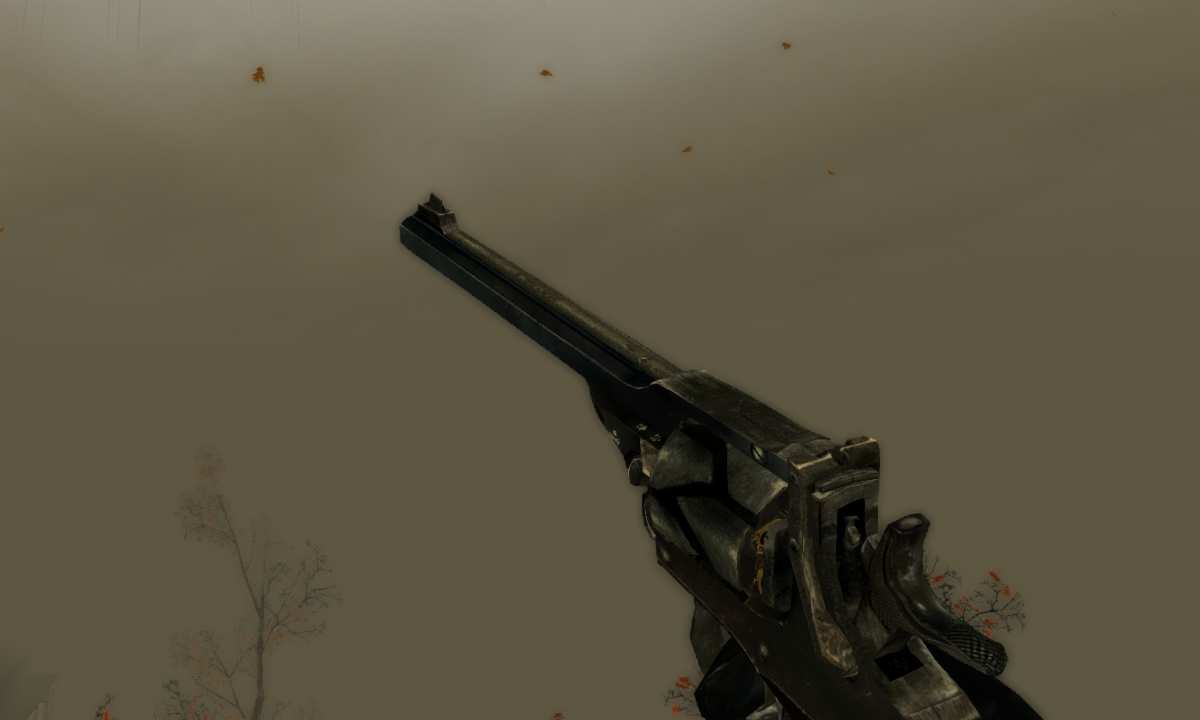 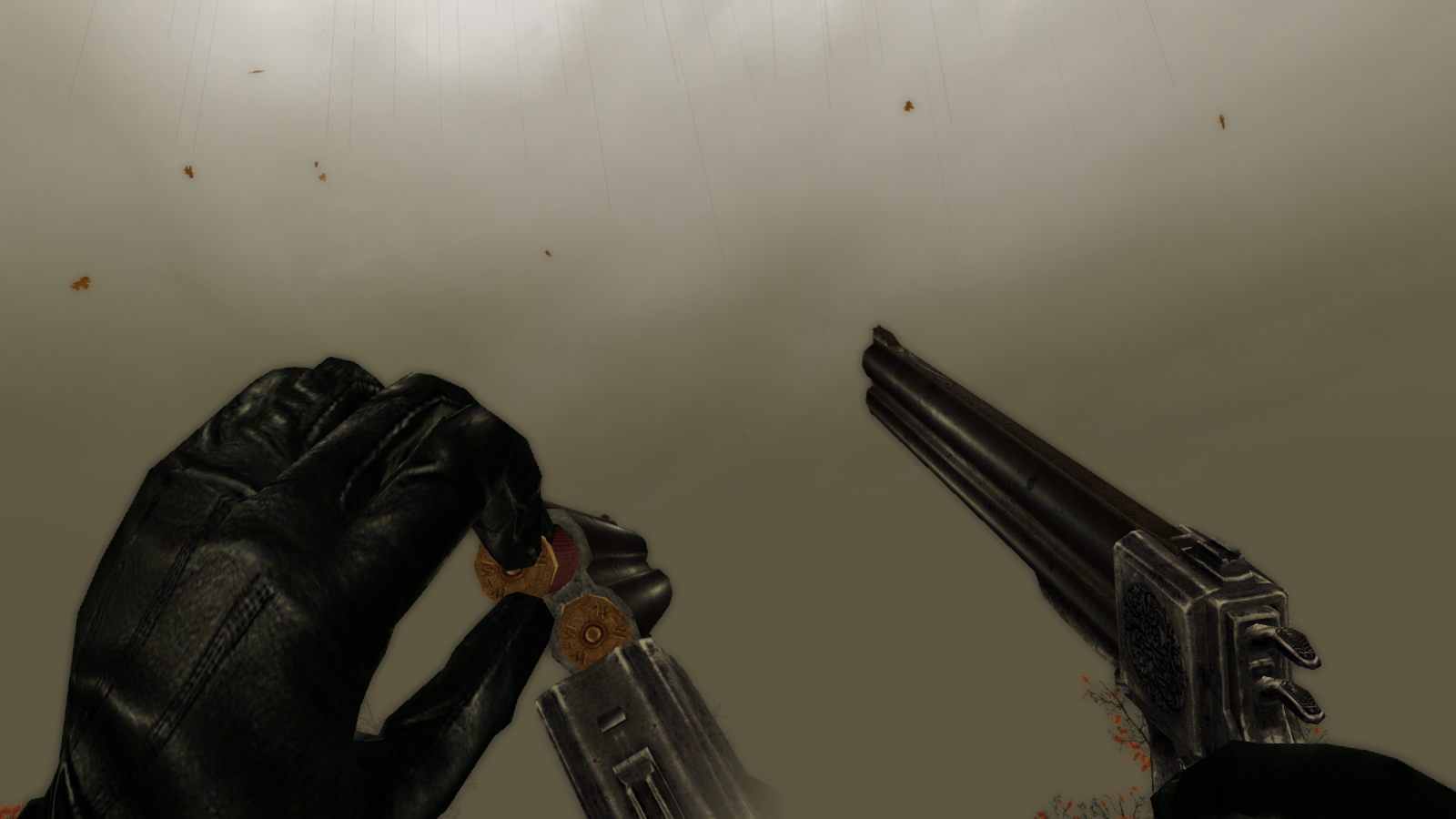 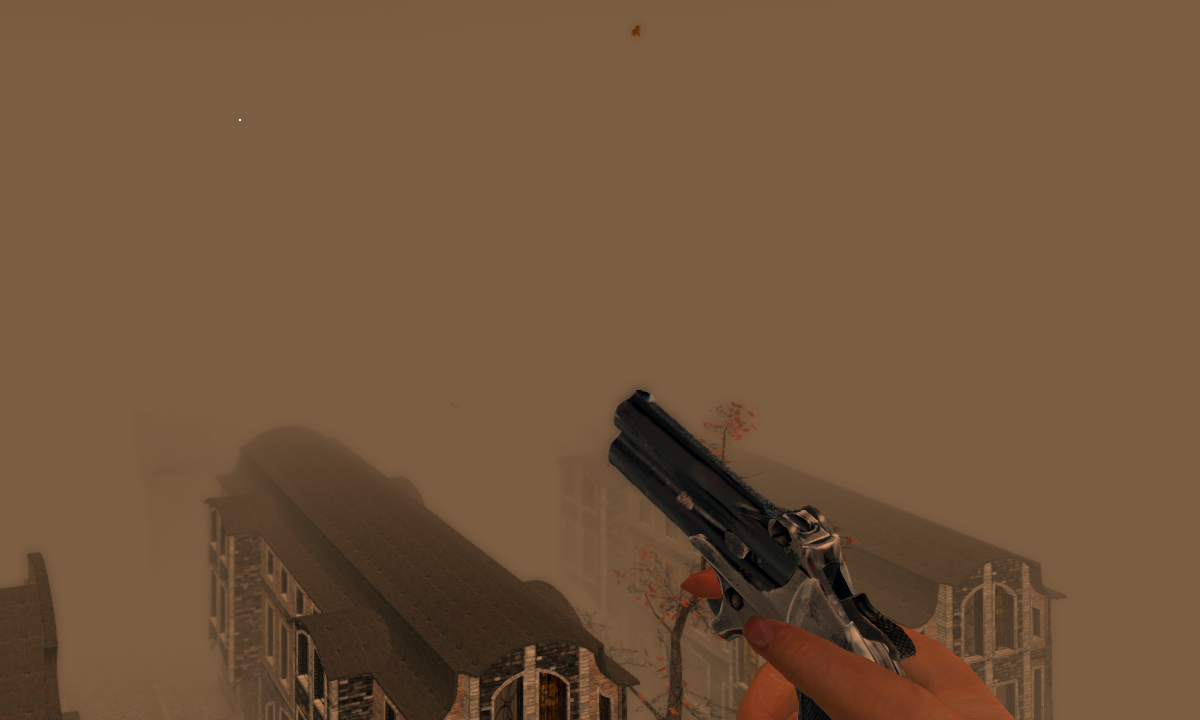 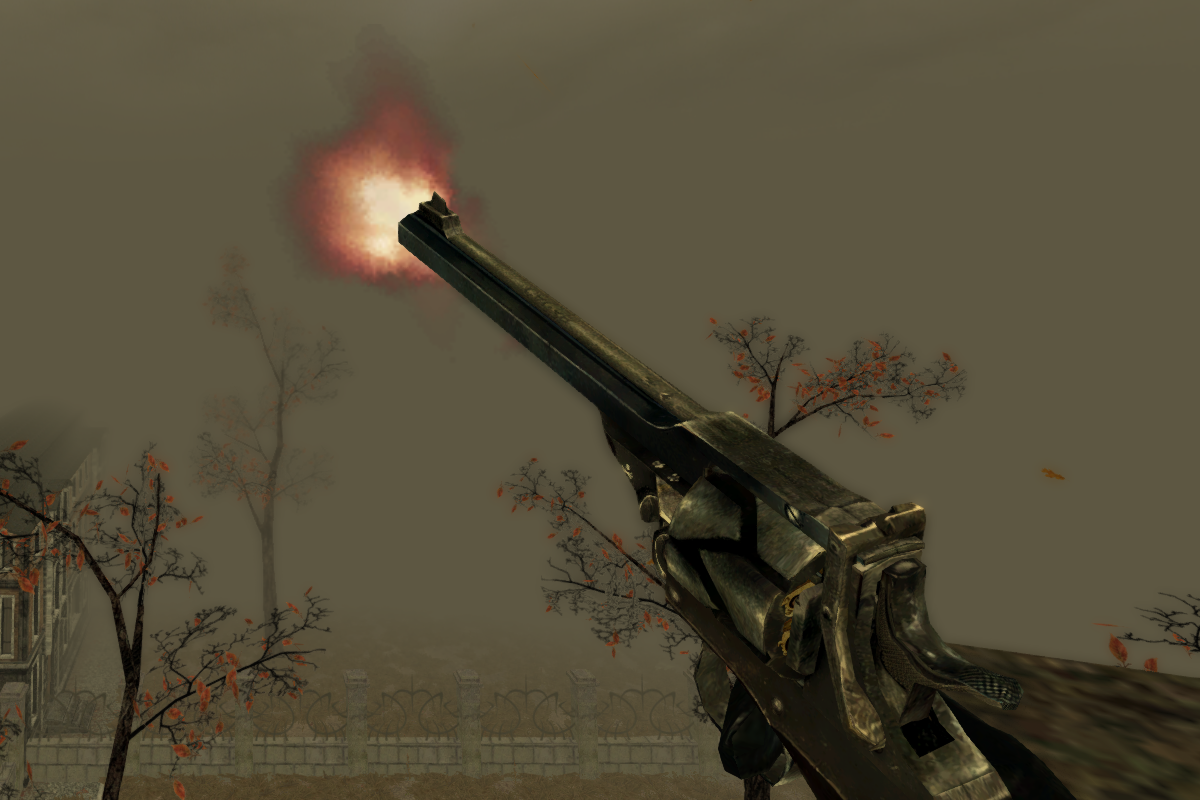 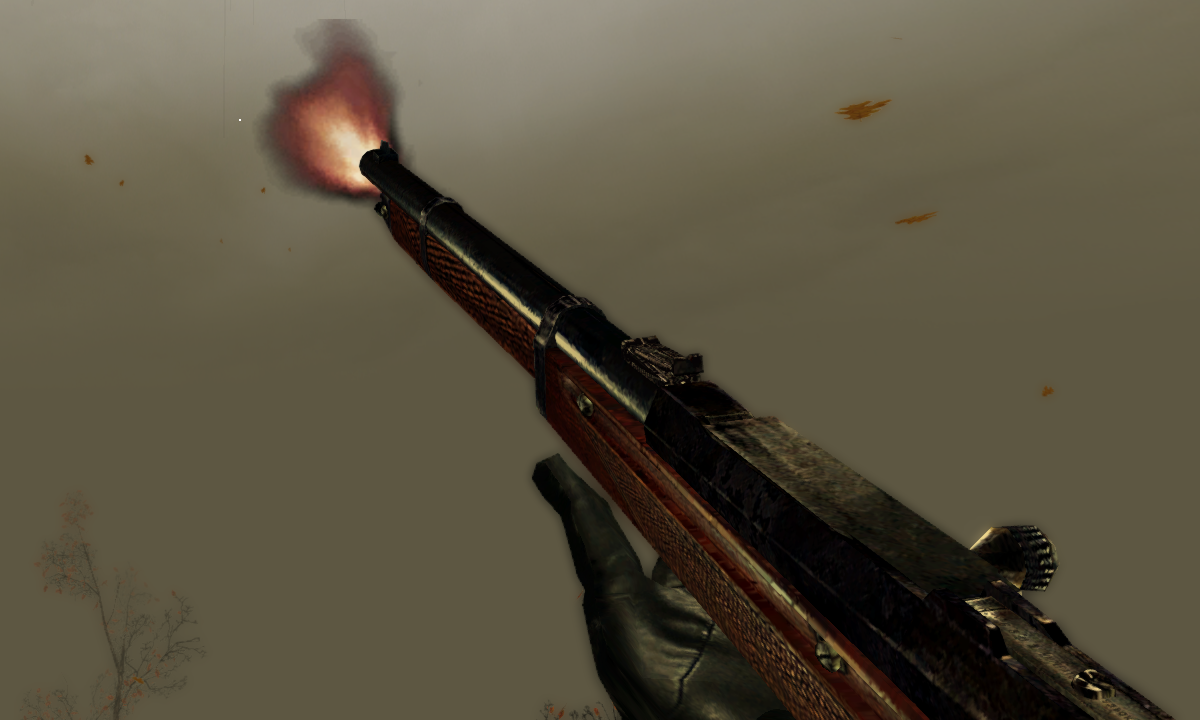 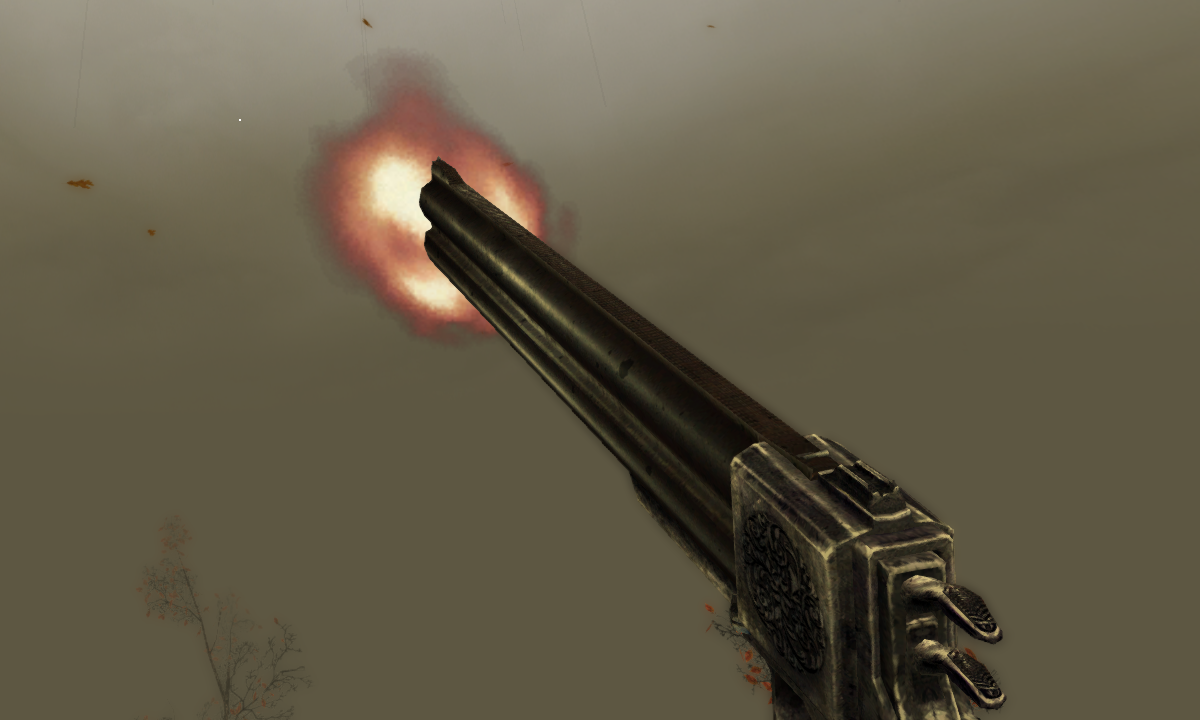 Besides the weapons, a few backend visuals have been changed in some way.

-New logo for the project! 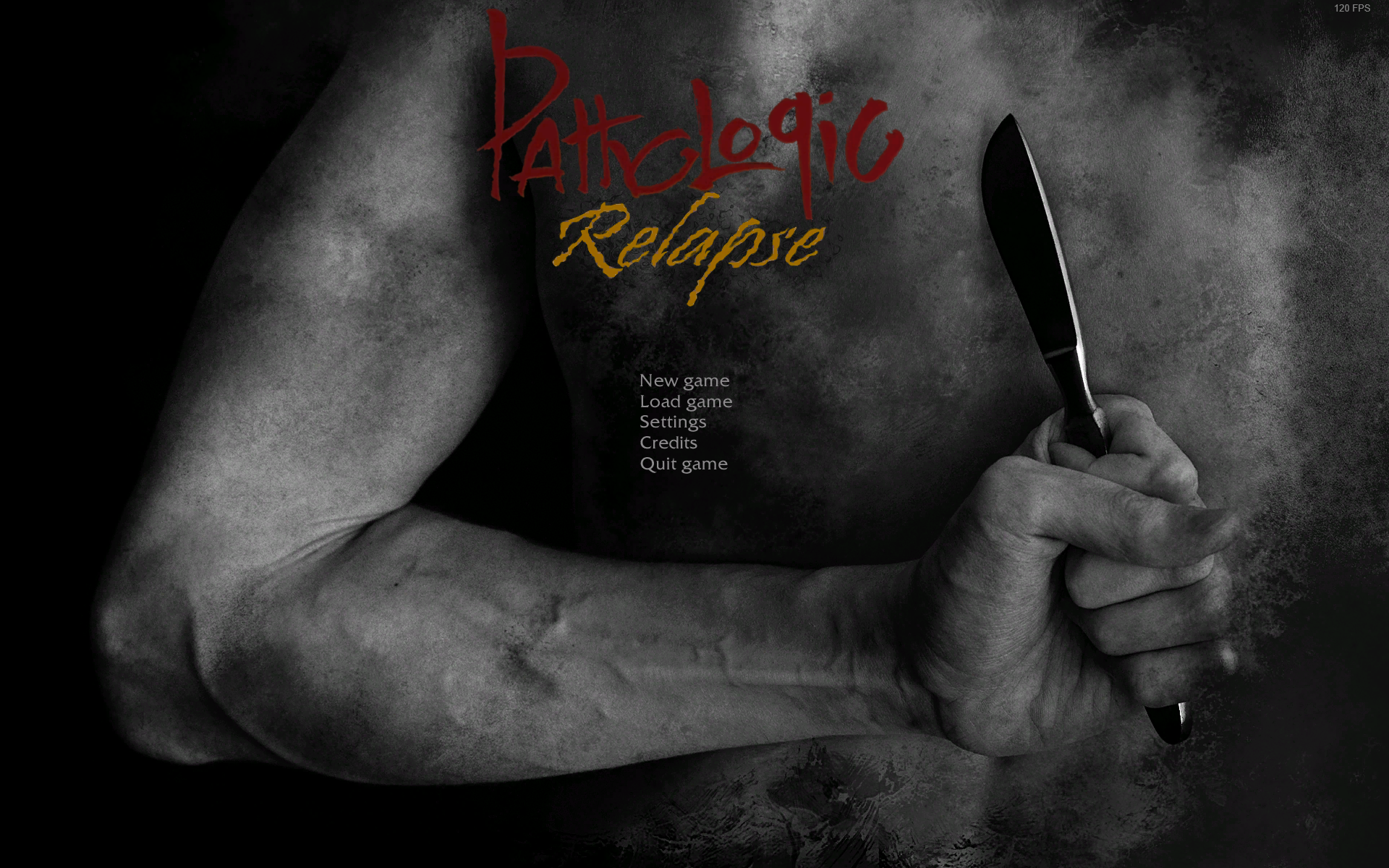 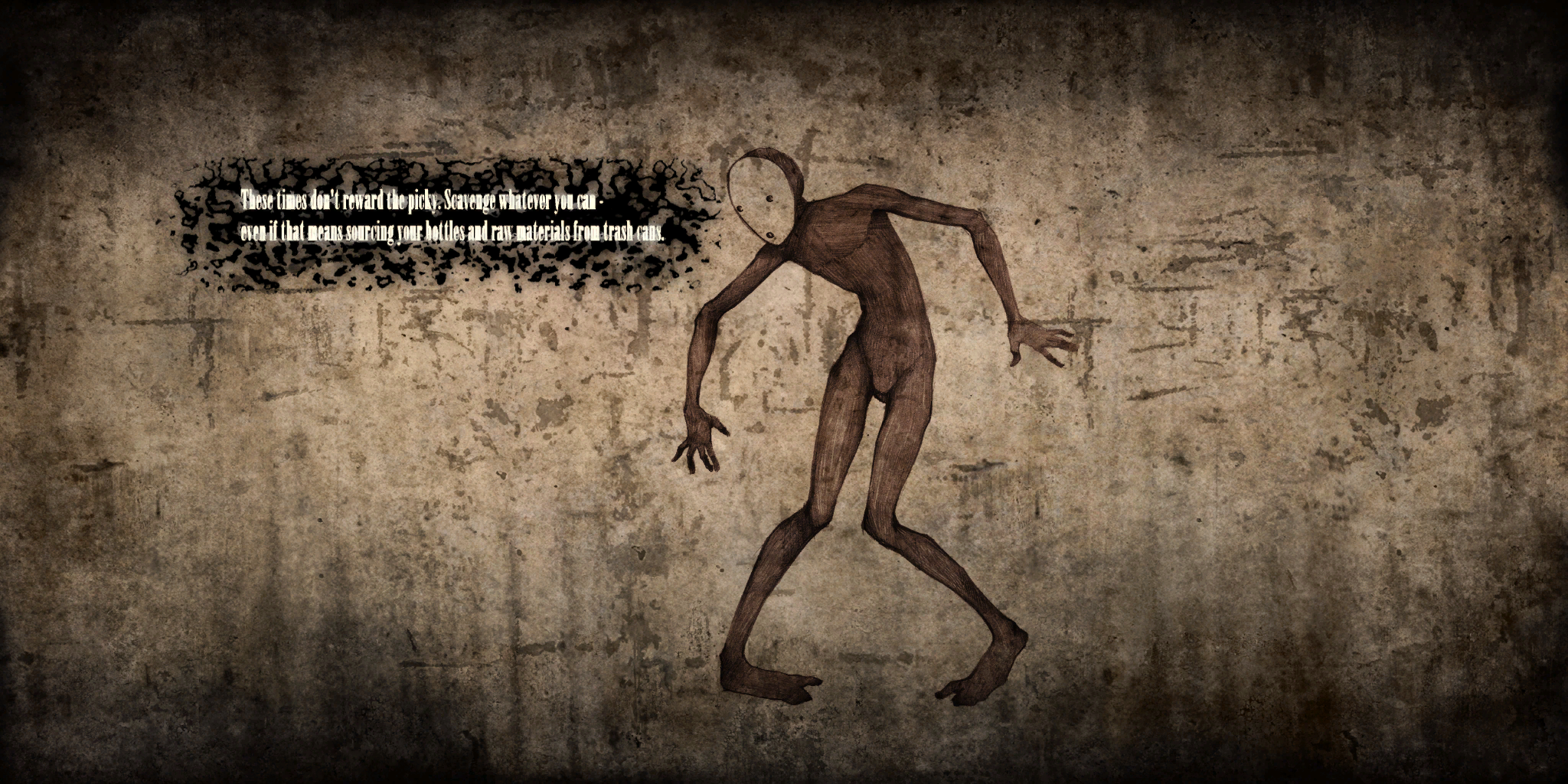 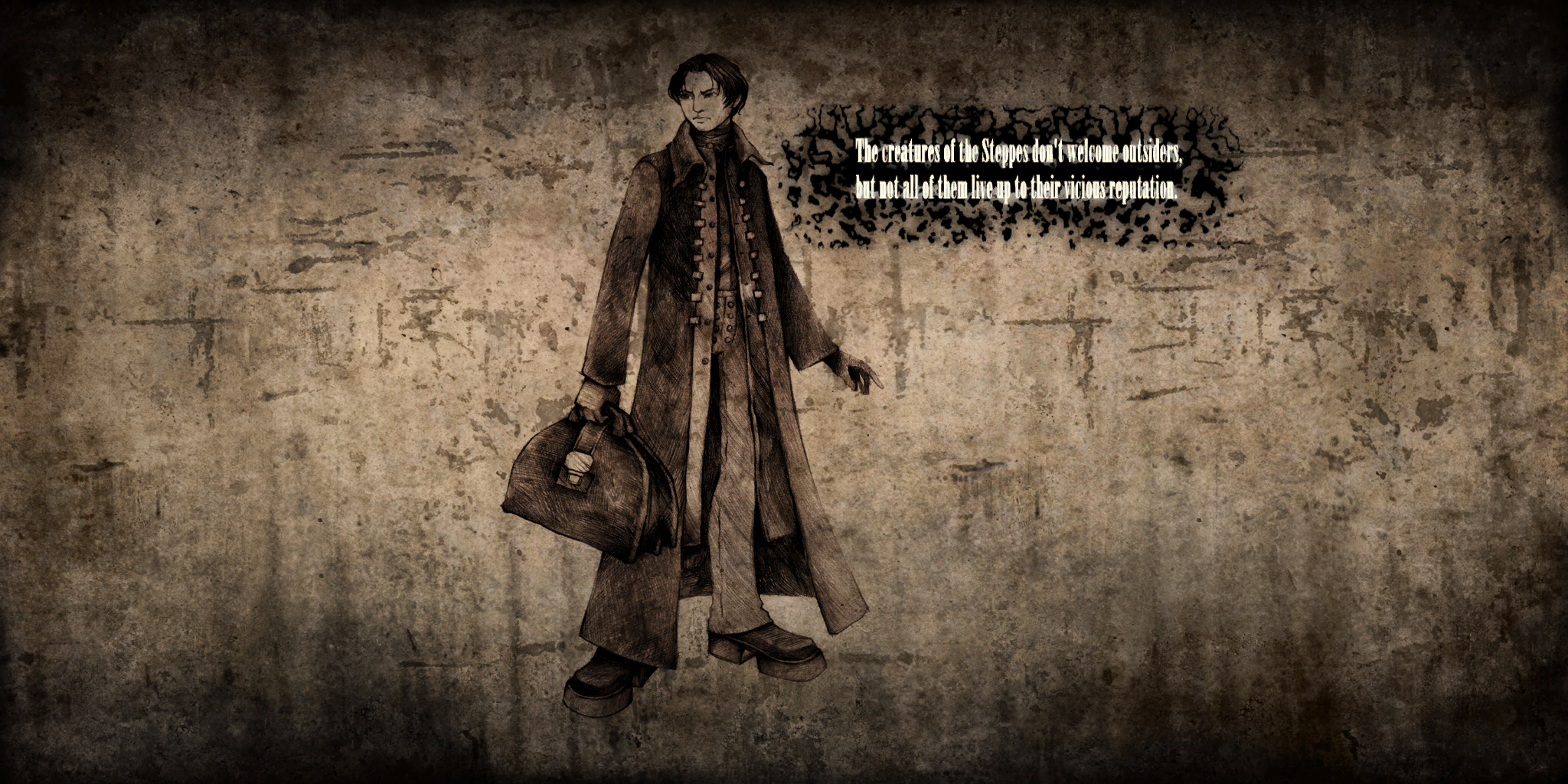 Along with a visual upgrade, all weapons also received new sounds! These were designed to make their firing sounds and reload sounds more satisfying. The weapons are incredibly rare anyway, so they may as well be satisfying to use.

-Revised firing sounds for the revolver, overlaying real-life recordings of revolvers and other weapons to create a meatier sound. In keeping with the gun having a longer barrel, the sound is more of an explosive hiss

-Revised firing sounds for the rifle, including heavier bass and beefier weapon shot effects with some mechanical undertone to give weight to the gun

-Revised shotgun firing sound, having a bigger bang and deeper bass for a more explosive SFX fitting of the gun's ammunition

If you'd like to hear these in action, watch the video below:

Besides weapon sounds, a few other event-based sounds were modified.

After some testing, game speed has been increased by 20% and clock speed slowed down by 20%. In effect this allows the player (and other NPCs) to move a bit quicker and pursue their objectives with the same amount of time they had before. This is in response to opinions that the walking speed - and the game - is far too slow. Perhaps the strongest criticism of Pathologic is that moving from one location to another is a chore. Moreover, the need to travel across town sometimes multiple times in one day can be frustrating for newer players. Pathologic is, of course, a challenging game - but I felt there was a difference between challenging and frustrating. You can always modify these commands in the init.cfg if you'd prefer to play with the rest of the changes in this mod without the speed increase. Weapon reload sounds have had to be manually sped up by 20% to account for this so they still play in time.

Pathologic's English translation was famously obtuse. Classic HD's is considerably better, but many awkward phrases and difficult lines of dialogue are still present in the game's files. Moreover, the weapons could do with updated details to make them fit better into the world.

-Extra details have been added to all weapon text, noting the real name of the weapon (if applicable), as well as changing a few details to be more accurate. The Shotgun, has it has no real-life equivalent but is named Samopal in the game files, has been nicknamed the Samopal in-game too.

-A lot of the English dialogue (several thousand lines) have had their translations improved, fixing grammar and punctuation as well as adjusting dialogue so it's more readable. Some really clunky phrases were rewritten. Due to the sheer number of lines in this game, this treatment could not be feasibly applied across the entire narrative, but hopefully enough were touched that a general improvement in conversation readability is visible 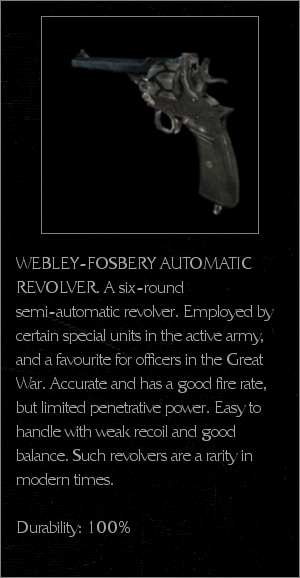 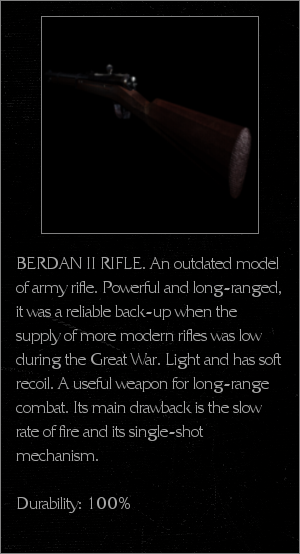 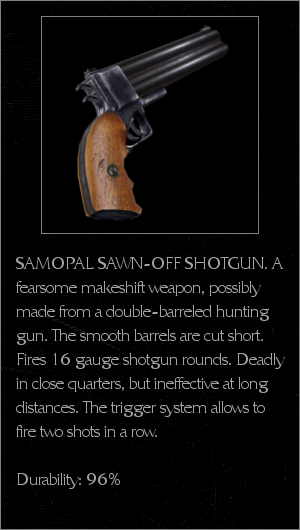 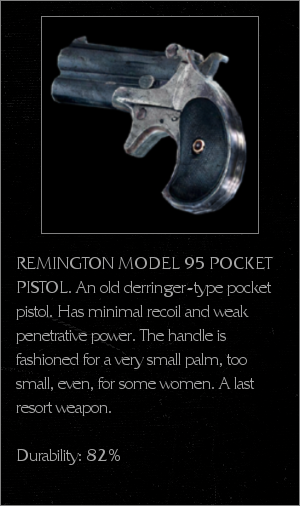 Included two save files - one is the Haruspex with his three firearms, and one is the Changeling with her Derringer, both with ammo, for testing purposes. Simply delete these if you want a fresh game without these saves included.

That's all for Relapse's 1.0 release! Technically, any textures in the game can be improved, as well as any sounds, but I feel I've touched upon the main bases I wanted to here. I would like to make deeper changes like to game mechanics or models, but unfortunately I don't think the tools are available for such changes. If the capability for deeper changes - or if I feel a particularly rough visual from the original or phrase was not fixed up in Relapse - there may be further updates, but for now, this is my only planned release. Hopefully this encourages a few people to return to the game, especially if you're like me and found your first playthrough a real struggle to get through. The changes above make it more playable, and I've been enjoying the game a lot more.

Thank you for reading, and enjoy Pathologic: Relapse!

In The Middle Of Zombies Role Playing