* Quick gameplay, easy to pop in and start having fun immediately
* Ability to continue from your last saved game
* Compete with other players online via the high score table

50 WAVES OF MEDIEVAL MONSTERS
Hordes of cyclops, goblins, imps, sandworms and more await you in the arena.

5 UNIQUE BOSS BATTLES
Face off with the Gelatinous Cube, Minotaur, Green Dragon, and other huge beasts, all with unique behaviors, weaknesses and strategies.

TRY THE FREE DEMO
The Free Trial offers 10 waves of action, including one of the 5 unique bosses.

Glory awaits you in the arena!

An HTML5 game in the Mac App Store

HTML5 is the development buzzword of the moment. It's the "ajax ninja" of the last few years, so naturally it comes with its fair share of skepticism. Indeed, many have been writing about its seemingly never-ending spec, inconsistent implementations by browser makers, and even its inferiority to native apps. All are valid arguments against betting a real business on HTML5. 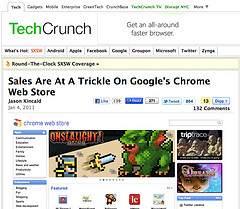 However, here's a hard example of why you absolutely should consider serious development in HTML5. In December of last year, we launched our little pure-HTML5 gameOnslaught! Arena in the Google Chrome Webstore. Sales could be better, sure, but we also just launched the exact same game in the Mac App Store. The code is identical with negligible development time required to port it over to a completely different platform.Think about the business case for that. Normally it would take considerable resources to port a game to such a different platform. We know our game isn't exactly a AAA title, but if programmed from the ground up in Objective-C, our best guess is it would take a few months to develop. That's time that we can now spend on content updates or even a sequel. 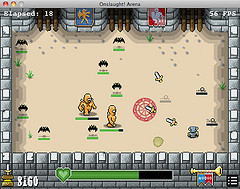 How was it done? We just embedded a WebView in a native Cocoa app using Xcode. Is it inferior? Not noticeably so. On my MacBook Pro, the Chrome Web Store version ranges from about 50-250 FPS (frames per second) depending on how many monsters are on the screen. On the same computer, the Mac App Store versionranges from 30-100 FPS. (You can see this for yourself: type "lddebug" while in-game to see debug information.) And despite nasty HTML5 audio issues, sound plays great in both versions.Surprisingly, the Chrome version runs faster than the native Mac version. While Safari and Chrome are both using WebKit as their rendering engines, Chrome is likely faster because V8 has wicked speed and its canvas rendering is hardware-accelerated.Either way, it runs great on both platforms and required almost no dedicated development time to port. If you're a developer, you should find this exciting. We certainly do! 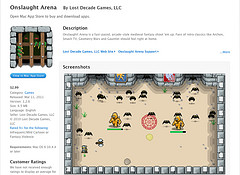 Since you made it this far, you might like to read "Our first week in the Chrome Webstore: the numbers" if you're into graphs and sales numbers (and who isn't!). If you'd like to learn more about our HTML5 development, including a tutorial on how to embed a WebView into a native Mac app, follow us on Twitter; we'll be writing about that soon.See Onslaught! Arena in the Mac App Store.

A minor update to our medieval fantasy arcade shoot 'em up, Onslaught! Arena.

Lost Decade Games has written about the mistakes made and lessons learned from their recent entry to an indie game contest.

Thanks for proving that you can make a solid game in HTML5! After playing this game, I realized that HTML5 Canvas was actually mature enough for me to start leveraging it for my own games :)

This game looks pretty neat. I will buy it for sure when it comes available for the iPhone.

That's a nice looking little game you've got there. Awesome finishing it, let alone getting it on multiple platforms! I'll have to check it out in the Mac Store. Any chance of an iPhone version?

Hey this is pretty cool, kinda fun if u just wanna occupy yourself. i would never buy it though sorry. maybe for a mobile phone.

Hey thanks! I appreciate the honesty too :) We're looking at ways to translate the controls naturally to a touch device. It's very difficult but we're trying!

Well, for touch devices, you should just be able to either have a virtual joystick on the left to control your character and then tap on the screen where you want the projectiles to go, or have dual virtual joysticks, one for movement and one for projectile direction control, which would be more challenging and perhaps not as fluid.

thank you for not taking my comment as a put down. i didnt mean it to be.