Only Fools & Corpses is a game about a zombie apocalypse - specifically, one designed and triggered by you, the player. You get some points to spend on designing your Zombies (and the Contagion that produces them), then you head to a town to... administer it. The goal of each level is to be the only living thing left. There are several hazards - Cops, enraged civilians, and even the zombies themselves may come after you, so you will need to run and hide to survive. There are key buildings on each level as well, which will control the way the various npcs behave - for example the cinema makes a good infection spot, and the butcher will attract zombies. There are a lot of planned features for future versions of the game - unique upgrades to make special infected (flaming, exploding, or gun-toting zombies), new types of buildings, boss levels, and possibly even some multiplayer modes. All in all, we're really excited and we hope you'll watch this space!

Zombies. Zombies are what it's all about. Sickly blue, groaning, shuffling, hungry Zombies. 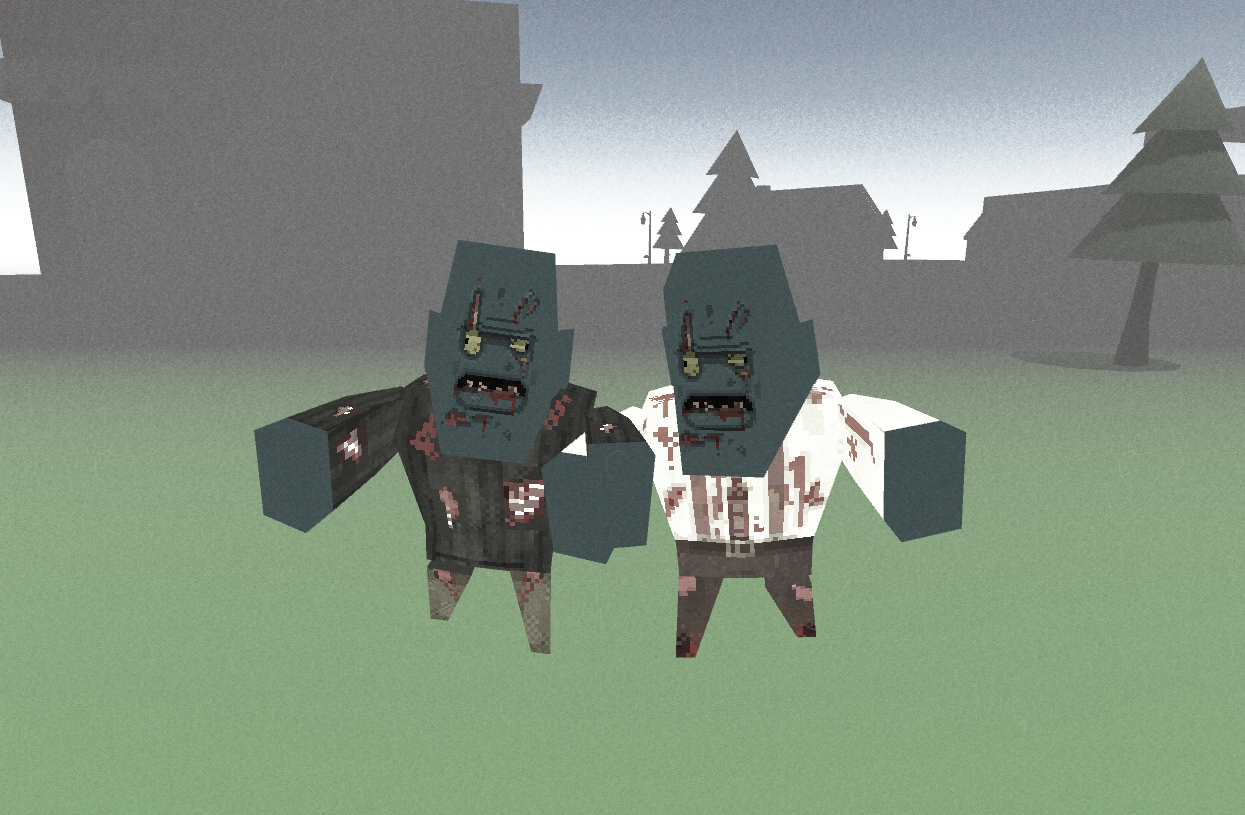 Welcome to the second Mechanic Spotlight for Only Fools and Corpses, where we'll be discussing the second most important unit in the game: the Zom- Well, you get it...

In OF&C, the player gets given some points each level to design their contagion, and the zombies it will transform the infected into. Zombies currently (version 0.1) have 3 different stats to choose from - Damage, Speed and Toughness.

Zombies roam around the town looking for targets according to a priority system. The system breaks down as follows...

First of all, if a Zombie spots a Butcher's shop (pictured below), they will attack it above all else - the food on display is too enticing to resist. This becomes a problem if they are under attack - as they will ignore their attacker in favour of the delicious meats contained within the shop. High Damage or Toughness can help relieve this issue, as it allows the Zombies to destroy the butcher's shop either quickly (high Damage) or with minimal Zombie casualties (high Toughness). Either way, the Butcher's shop can still cause problems - so it is worth being aware of them when you plan your infection. 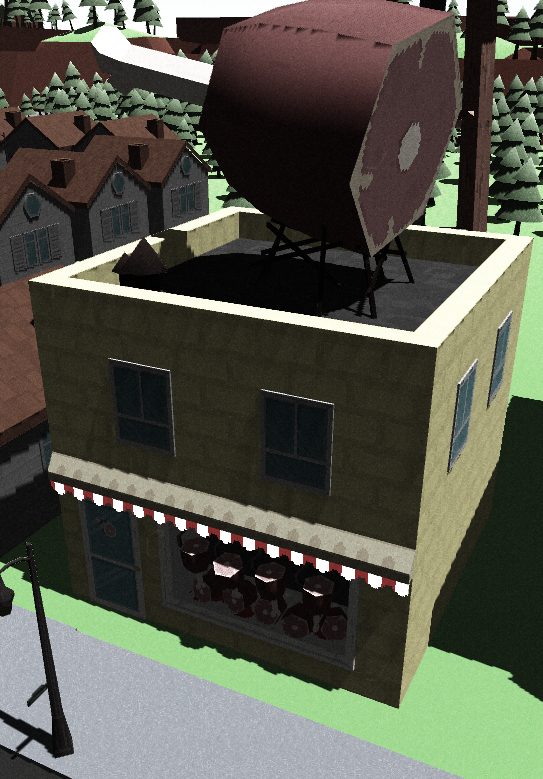 If there is no Butcher's shop (or they are all destroyed), Zombies will pursue the closest non-zombie unit in range, be it a police officer, the player, or a citizen. Anytime a new target comes within range, Zombies will perform an internal "focus roll" to see if they will switch targets. How focused the zombies are is a stat we are looking to make editable by the player in coming updates, but for now, they generally swap to the closest target. One helpful exception to this is that if a Zombie gets attacked, they will pursue their attacker to get revenge. This is also factored into the focus roll, so zombies generally stay 'locked on' to a hostile target, rather than switching to a closer, less dangerous target. There are some other factors which affect their focus as well...

Zombies wouldn't be Zombies if they didn't form packs and shambling hordes to chase their prey. Zombies constantly broadcast their target (if they have one) to other Zombies, meaning that if one Zombie spots a target, the others will usually join the chase. This effect takes the distance between zombies into account, meaning that stragglers who get separated from the main pack are more like to swap target if a closer one comes along - and they may pull others from the horde with them, to form a small pack. 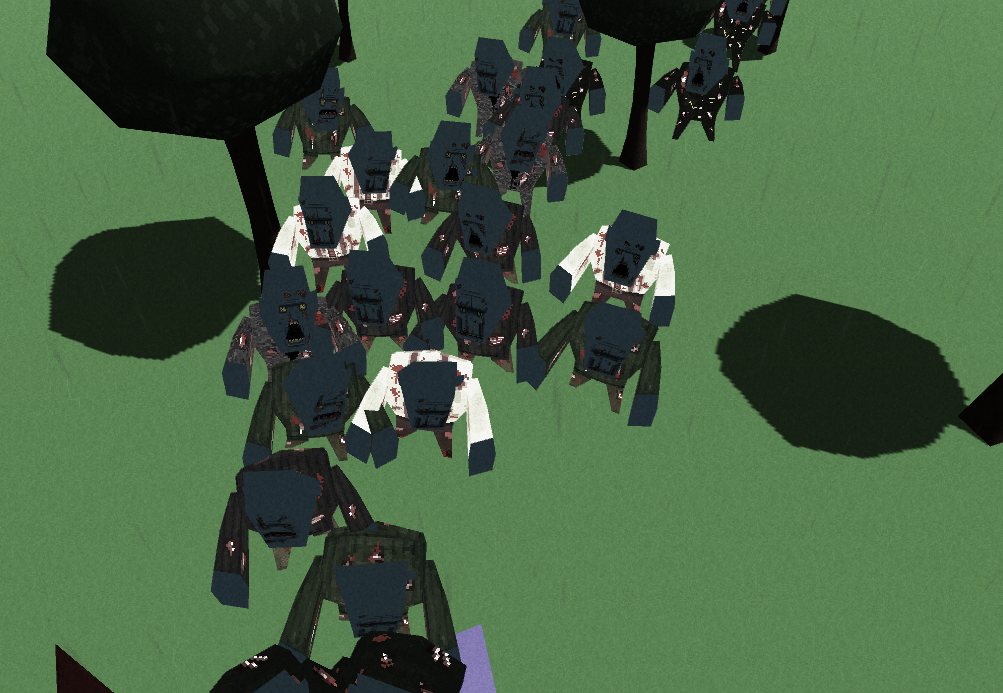 Finally, if a Zombie has no target (and none of its neighbours do either), they begin to wander around randomly, searching for something. This state normally doesn't last too long, as it only takes one Zombie spotting a citizen to send the entire horde after them - and of course the player can, if need be, use themselves as bait to lure Zombies toward hiding Citizens.

There are two main ways the player can influence the behaviour of the Zombies. Either the player can use the Zombie Whistle to get their attention (causing them to chase the player and attempt to eat them), or the player can throw a piece of Zombie Bait - which will attract the undead to a marked spot (or building) for a short time. This becomes very important on later levels, as people will usually end up hiding in buildings (making it harder for the Zombies to spot them).

All in all, designing, controlling and avoiding Zombies are all important elements in Only Fools and Corpses, and we hope this article will help shed some light on their behaviour. As one of the core game elements, of course, we are constantly working to expand and improve the AI that governs the Zombies - to make it more thematic, and more accessible to the player for editing.

Anyway, we hope you enjoyed this spotlight - thanks for reading!

Our next article will look at the Police Officer unit!

Here we explain some key information about one of Only Fools & Corpses' most important units - the Citizen.

The very first draft alpha demo of Only Fools and Corpses. Lots of placeholder UI, and a few bugs (no doubt), but it should help you get a little taste...

Indie
Tags
Embed Buttons
Link to Only Fools & Corpses by selecting a button and using the embed code provided more...