Welcome to an enigmatic world Novus Inceptio where a new gaming experience in exploring, building and surviving is waiting right for you. Experience sandbox world with survival elements and join us in creation a full version of the game.

It is amazing how time flies. It considers that it is only a few days when we launched our game into "early access" here on Steam. And now we celebrate 1st Anniversary!

it is amazing how time flies. It considers that it is only a few days when we launched our game into "early access" here on Steam. It was precisely October 5, 2015 at 18:00 CEST time.

For us it was a huge step and full year brought us many new experiences and knowledge. We were trying to bring new things to the game, and most importantly repair and upgrade basic game elements and logic. But we not fulfilled everything we wanted - unfortunately such is the development and priorities change with regard to your requirements and weaknesses in the game that surfaced. All in all it was a very hard work year and subsequent years are ahead of us.

We thank you very much everyone for your patronage, support and most importantly patience!

The first anniversary of our little we prepared a smaller event.

Event will last until the end of the week - it may be extended until 12 October 2016 (according to the interests of players).

During this event you can get:A unique achievement for playing Novus Inceptio during this event.
Unique in-game item (a statue for our 1st anniversary - a unique achievement, representing this gift) - it is necessary to write in in-game chat this command " /reward " ( without the quotes, but with a slash )
During the whole event is raised skill up 2x

We hope that you will be delighted and will remain loyal to our game. 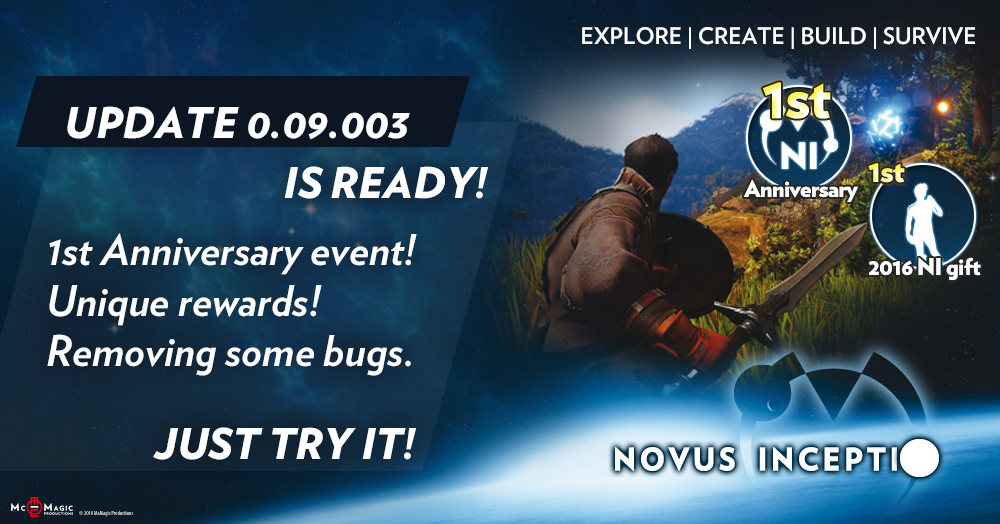 Below is a detailed description of the update: