Tilt the floor to roll a ball through an obstacle course and collect coins before time runs out. Neverball is part puzzle game, part action game, and entirely a test of skill. The current version of Neverbal features over 140 challenging levels divided into six sets. Bonus levels can be unlocked by playing "challenge" mode. Neverball also supports mouse, keyboard, gamepad and joystick input. Please see the in-game Help screen for playing instructions. Our official forums can be found at nevercorner.net along with the Nevertable, an online "Hall Of Fame" where replays can be uploaded and shared with the community. 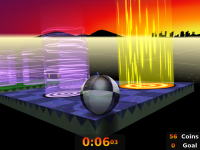 Recently, Neverball contributors came together for their first IRC gathering to discuss current development status and progress towards a 1.6.0 release.

Before we get into details, here are some links to recent development builds for MacOS and Windows that we're welcoming feedback on:

Linux users (or interested people on other platforms) are free to compile source from our SVN repository ( S.snth.net neverball )

The most noticeable features in these builds (which also include Neverputt) are:

We still have a few items left on our collective todo lists, most of which revolve around making Neverball more friendly for mappers:

We don't have a timeframe on the release at this stage, but we'll definitely be making announcements when we have release candidates available.

For anybody who's interested in such things, we now have Neverball themed t-shirts available, details of which can be found here.

The Recession Bundle has just launched and Star-Twine is a part of it! The bundle includes 6 freeware games and 2 paid bonus games for donators! A portion...

An Interview With Neverball's Original Developer

Neverball community member Cheeseness interviews original Neverball creator about Neverball's inspiration, creation and evolution, and what it's like...

Over the years, Neverball has been adapted for a lot of purposes by a lot of different people. Most recently, we've heard that somebody has been working...

Neverball and Neverputt are coming to Desura!

We're excited to announce that Neverball and Neverputt are coming to Desura!

Android version PLEASE. This game would be PERFECT for tablets and smartphones, since they have cccelerometer controls. I wonder why nobody has made a port yet.

Actually, there have been both iOS and Android ports that have had work done on them.

A version of Neverputt based on the 1.4.x source tree has been available on the iTunes store for several years ( Itunes.apple.com ). Neverball has some performance issues, which our recent migration to OpenGL ES will hopefully help with).

There's an APK for testing on Android devices, which can be downloaded from our forum ( Forum.nevercorner.net ). I'm not working on that myself, but I am under the impression that it is getting some development attention at the moment from one or two of our other contributors :)

it was my first game on pc

Really neat game. Takes some time to get the hang of it. Some levels are frustratingly hard. The basic levels are all quite doable.

Have played this game quite some time (not via Desura, just from repos) and I'm suprised to hear people calling the controlls jerky. Aren't they using the mouse or something? You don't want to play this game with the keyboard, but with mouse (or joystick, I imagine) it works like a charm.
(The rest is skill-dependent. ;-))

Controls can be jerky, but its fun

This is a great game, but I find it really hard to control. I struggled just to finish the first level. Any advice? I really like these kind of "rolling ball" games.

I really recommend trying it with an analog joystick. It's a lot easier to me because of how the board recenters automatically.

Using the arrow keys on a keyboard works like this too, though it is a little bit more jerky.

Yes, tried analog control and it became better. Didn't find that option anywhere in the game, though. Just started it and started messing with my gamepad and was O.o, then \o/!

The best tip I can give you is to use the smallest movements possible and try to avoid bouncing off the rails. As with anything skill based, practice is the biggest thing!

Watching the video, I can't fathom the amount of control needed to such smooth runs. Oh, well, I'll try until I get enraged. :D

Being frustrated is the best part! :D

There's nothing better than the sense of accomplishment you get from persevering and overcoming a difficult level.

You might also find that manual camera (F3) might help you master ball control before having to deal with automatic camera (F1 and F2) movements.

Unlimited Escape 2 - Beyond the legend Arcade

Quick shot to the bullseye Arcade