Welcome back to our Developer Blog. This week we are going to talk about one of the regiments we will be featuring in the game, the 20th Maine Volunteer Infantry Regiment. We will not be going into the history of the regiment, but will instead be talking about how it looks and works in the game. By the way, you can now talk to us directly about the game on our new Discord Server!

20th Maine Volunteer Infantry Regiment Part 1/2
This blog entry is split into two parts. In the first part we will be talking about a single company and show ingame-renders of some of the enlisted men and non-commissioned officers. In next weeks Developer Blog we will be talking about the regimental structure in the game, different companies and show some of the commissioned officers in more detail. 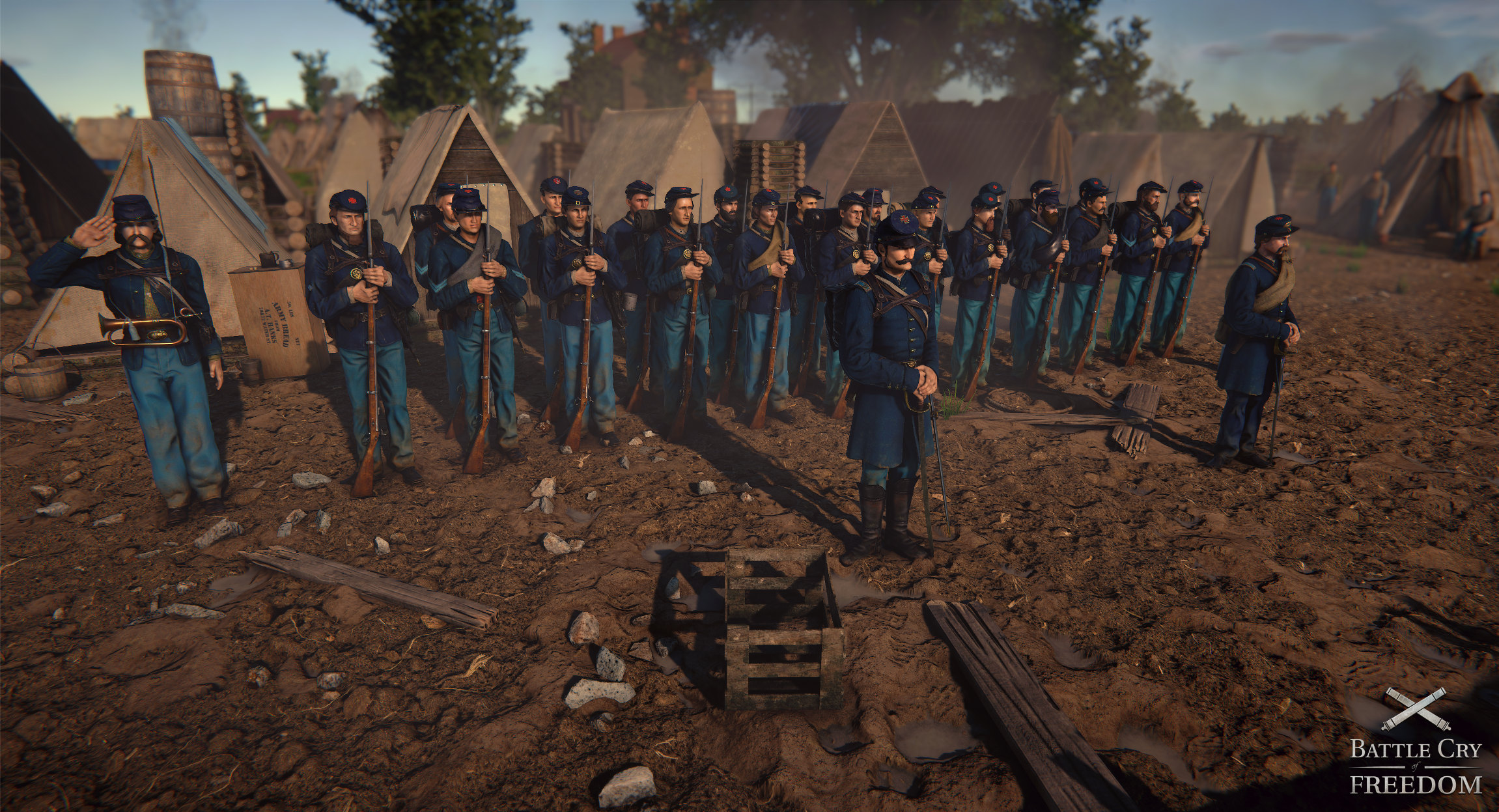 The screenshot above displays company C of the 20th Maine Volunteer Infantry Regiment in the game, at camp. All the men are in parade rest, and the officers have stepped in-front of their respective platoons.

You might have noticed that the company is not having the correct composition of ranks that a company should have had in reality. This has three reasons. Firstly, it was not uncommon during the civil war, that a company would be reduced so much in size that many ranks were simply missing or no longer needed. Secondly, it would blow the scale of our game if we were to include every single rank that a regiment/company would have had. Thirdly, we also decided to attach one field musician to each company. This is not realistic, as in reality only the two designated skirmishing companies would have had field musicians directly attached to the company. However, for gameplay and scale reasons every company in the game is going to have 1 field musician.

For example, here is the list of ranks that, according to the regulations/manuals, a company would have had and what we will instead feature in the game. 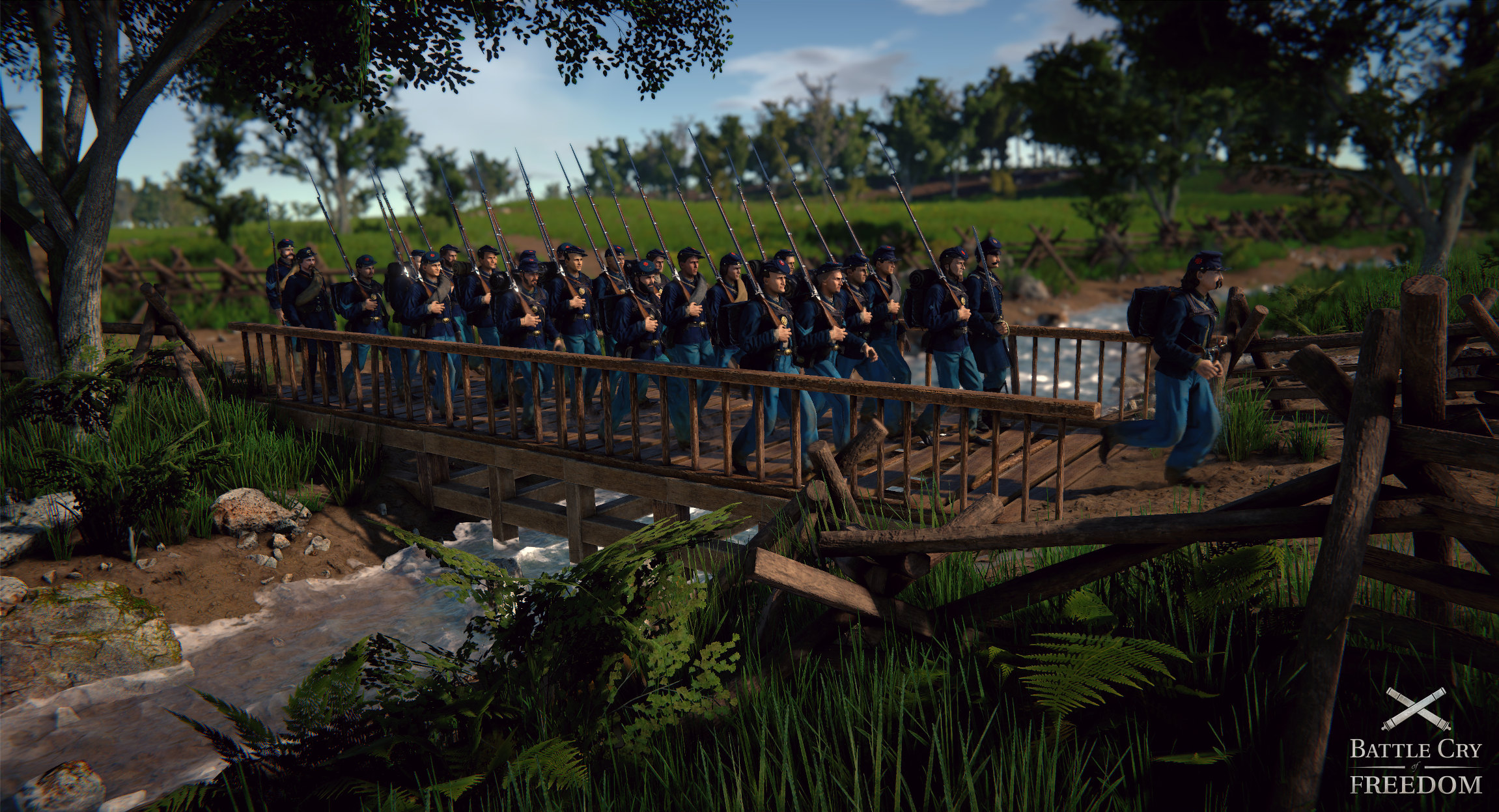 Clothing and Equipment
The average enlisted soldier will be wearing a fatigue blouse, which is more commonly referred to as ’sack coat’, together with regulation sky blue trousers, regulation forage caps with corps badge and the so-called ‘Jefferson bootee’, also known as ‘Brogans’, which were very typical footwear for soldiers on both sides of the conflict.

Further the average soldier is equipped with a U.S. M1861 .58cal cartridge box, worn from a shoulder cartridge belt with a round decorative plate affixed. The soldier’s waist belt is decorated with an oval belt buckle made of brass, has a M1850 cap pouch and a M1863 bayonet scabbard attached to it, among other things. On his back the soldier is wearing a late war double bag knapsack used to carry personal belongings, spare clothing and any other items the soldier might need. A blanket roll was commonly attached to the top of it.

Rations and other food were generally carried in the U.S. regulation haversack, which the soldier wears on his side. Finally the average enlisted men is wearing a M1862 or M1858 canteen. The canteens were usually covered with cloth in various colors and patterns or simply worn as they were. Canteens were crucially important for any soldier both during the long exhausting marches and in combat.

Depending on the company, the average soldier will be carrying either a M1861 Springfield Rifled Musket or a Pattern 1853 Enfield Rifle. 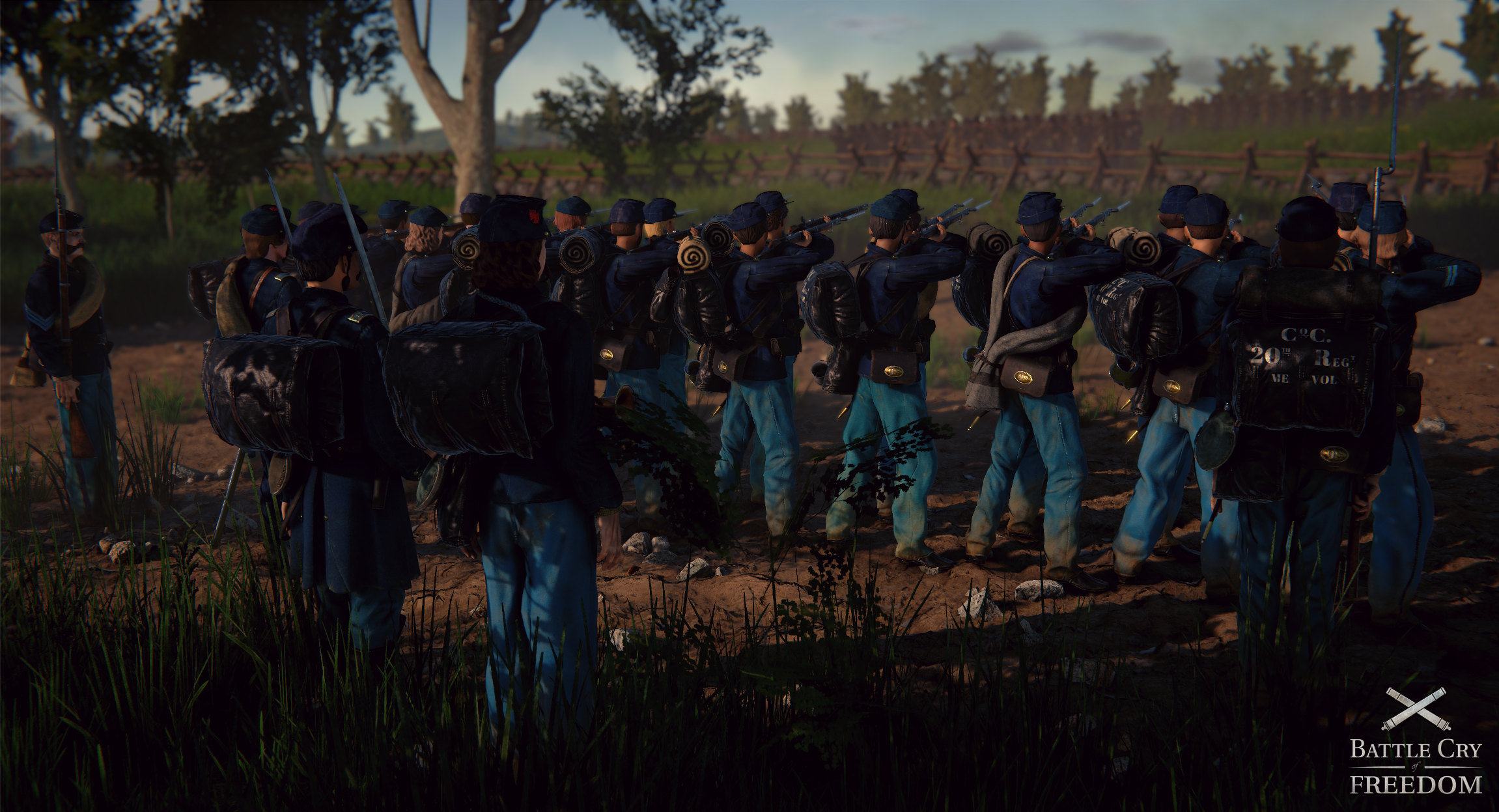 Below is a ingame render of an enlisted men of company C. He is carrying a double bag knapsack with s a brown/sand colored so called ‘emergency-blanket’ strapped to the top. The blanket is rolled up inside a waterproof gum-blanket, a very useful rubberized sheet of thin cloth, to protect it against the elements. His canteen is covered with a grey cloth cover to protect it and keep the water cold in the heat of the summer. It is inscribed with his company letter and number of his regiment. The canteen is hanging from a fairly uncommon (for 1863) regulation leather sling. This particular type of sling was abandoned by most major contractors in 1862 and was replaced with a cotton strap that was cheaper and easier to produce. He decided to pull the sling of his canteen through the handle of his cup, so as to securely carry it close to his body and always available.

We recommend watching the video in 4k, to get the best quality and to see all the detail. To watch it in full screen, please switch over to youtube, by clicking the "YouTube" button in the video.

Here is another ingame render of an enlisted men of company C. He is carrying almost the same set of equipment as the soldier above, but has bought or looted an extra pair of brogans which he tied to his knapsack. His gum blanket is either missing or stowed inside his backpack. You might notice the shiny brass ‘C’ on his forage cap. The brass ‘C’ indicates his company, while the cloth badge sewn on the top indicates that his regiment is part of the 1st Division, fifth Corps. Furthermore, while difficult to see, he is wearing a non issue, private purchase shirt. His haversack is stuffed to the rim with hardtack, a sort of ‘bread’ that does not spoil. His canteen has one of the newer white cotton straps, and has a metal chain connected to his stopper, which indicates that it is a New York depot issue canteen. The shiny metallic object hanging on his canteen is a ‘canteen-half’, a halved canteen with a metal wire run through one end that can be used as plate or pan for cooking. His cup is hanging from his haversack.

Instead of carrying a heavy and uncomfortable knapsack, the soldier below instead opted to drop his backpack and only carry a so called ‘blanket roll’. His blanket is the regulation grey blanket. It is simply rolled up with all valuable objects stuffed inside. The soldier tied ropes to several places on his roll, to make sure that nothing stuffed inside can fall out during the heat of the battle. Unlike most of the other guys in his regiment, he is wearing a federal issue gray wool-flannel shirt.

Just like his companion up above, the enlisted below decided to ditch his knapsack and wear a blanket roll instead. This particular soldier has decided to roll up the blanket inside his gum blanket to protect it from rain and mud. He decided to tie his cup to the blanket roll. Another thing to note is that he is carrying a M1862 ‘Bullseye’ canteen without a cover. Additionally, he is wearing a private purchase red wool shirt.

Below is yet another ingame render of one of the soldiers. This render displays a corporal with regulation stripes and dark blue stripes along his trouser seem. His knapsack is inscribed and indicates that he is from company C of the 20th Maine Volunteer Infantry Regiment. Instead of carrying a blanket roll, to make his life easier, this soldier has simply decided to drop most of the gear, but keep the backpack, which is why it appears to be fairly empty. He is carrying the regulation canteen with cotton strap and regulation white cotton shirt. On his waist belt you will notice a small brass keeper, which is a private purchase item used to keep the ends of the belt secure. While many waist belts came with leather keepers, they were often annoying to use and would deteriorate quickly. As such many soldiers decided to rip off the leather keeper entirely and just use none, while other soldiers, like the corporal in the render below decided to purchase a brass keeper instead.

Lastly, here is an ingame render of the first sergeant of company C. To conceal his identity from the enemy, this sergeant has decided to get rid of most of the visible insignia, such as sergeant stripes and dark blue stripes on his trousers. The only insignia left on his uniform are his NCO belt buckle and the little blue diamond indicating that he is the first sergeant. Dropping insignia was very common practice during the war, as officers and sergeants would obviously be shot at first. Additionally, this sergeant is also carrying a M1862 ‘Bullseye’ canteen with a cover. One last thing to note is his hat, which is a private purchase McDowell hat.

Note about historical accuracy regarding the 20th Maine in particular
As a note at the end of this blog we would like to mention that all of the above equipment is rather speculative. We are sadly lacking good reference material for the 20th Maine. Much of the equipment we chose to let them wear is based on assumption and wile none of it is inaccurate to the period or the Civil War in general, we can not be 100% certain if this is indeed how the 20th Maine really looked like. For example, we do not know if the 20th Maine used to put inscriptions on their knapsacks and canteens, or what type of blanket they were issued with. Furthermore, we do not know how many, if any, of their men dropped their knapsacks and chose to wear blanket rolls. We can only assume that some of them might have done it.

We are still in the early phases of reworking our uniforms and we still have a fairly low number of variations of equipment pieces to choose from. The final game will feature a lot more variations than the few shown above. In addition to that, some of the leatherworks are still just placeholders and will be reworked at some point before release.
That being said, it is still a game and we are trying our best to make it as accurate as possible. If anyone has more information regarding the 20th Maine, please contact us, we would love to fix anything that might be wrong with it.


That is it for this weeks Blog! Thank you for reading the Developer Blog and we will hopefully see you next week!
In next weeks Blog we will be talking about the 20th Maine, Part 2.

looks cool, its a shame that war of rights is going to over shadow this mod though.

This is a standalone game.