Hello and welcome back to the Battle Cry of Freedom developer blog! This week we are going to talk about Graphics and historical accuracy.

Hello and welcome back to the Battle Cry of Freedom developer blog! This week we are going to talk about Graphics and historical accuracy.

Graphics Part 1/3
Graphics are an important part of any game and to that end it is something we have spent a lot of time on during the creation of our game. However we are not planning on making the next Crysis! While graphics are important and can make the first impression for many potential players we prefer to focus on gameplay. We also are restricted by the limitations of our chosen game engine and have to work with the tools we are provided with. Despite this, as things stand we are very happy with the way the game looks. It may not be cutting edge compared to some high budget triple A titles but that is not everything. We believe that our models, textures and sounds combine together well enough to create an immersive 19th century experience. We are of course far from finished, and there is a lot more to come!

Face Customization
Facial customization is not currently implemented and instead faces are created randomly, but this is something we plan to change in the nearest future. We have created a large number of selectable faces, haircuts and beards that can be chosen by the player at will. Additionally, players will be able to select their hair color and accessories like glasses, tobacco pipes or cigars. All of our faces, beards and haircuts are recreated from historical photographs and based on both well known persons, like Joshua Chamberlain, but also on photographs of privates who’s name no one remembers now. This creates what we believe to be a fairly realistic period accurate look.

Below are screenshots of 11 of our 23 different face and haircut variations, in their default layout as well as some of our accessories. Maybe you will recognize some of the faces! Please note that while some of the units below are carrying artillery tools and are placed around a 32pounder, they are not dressed to be of a single unit or exclusively artillery. Clicking on any images in this blog will open a higher resolution version of them. 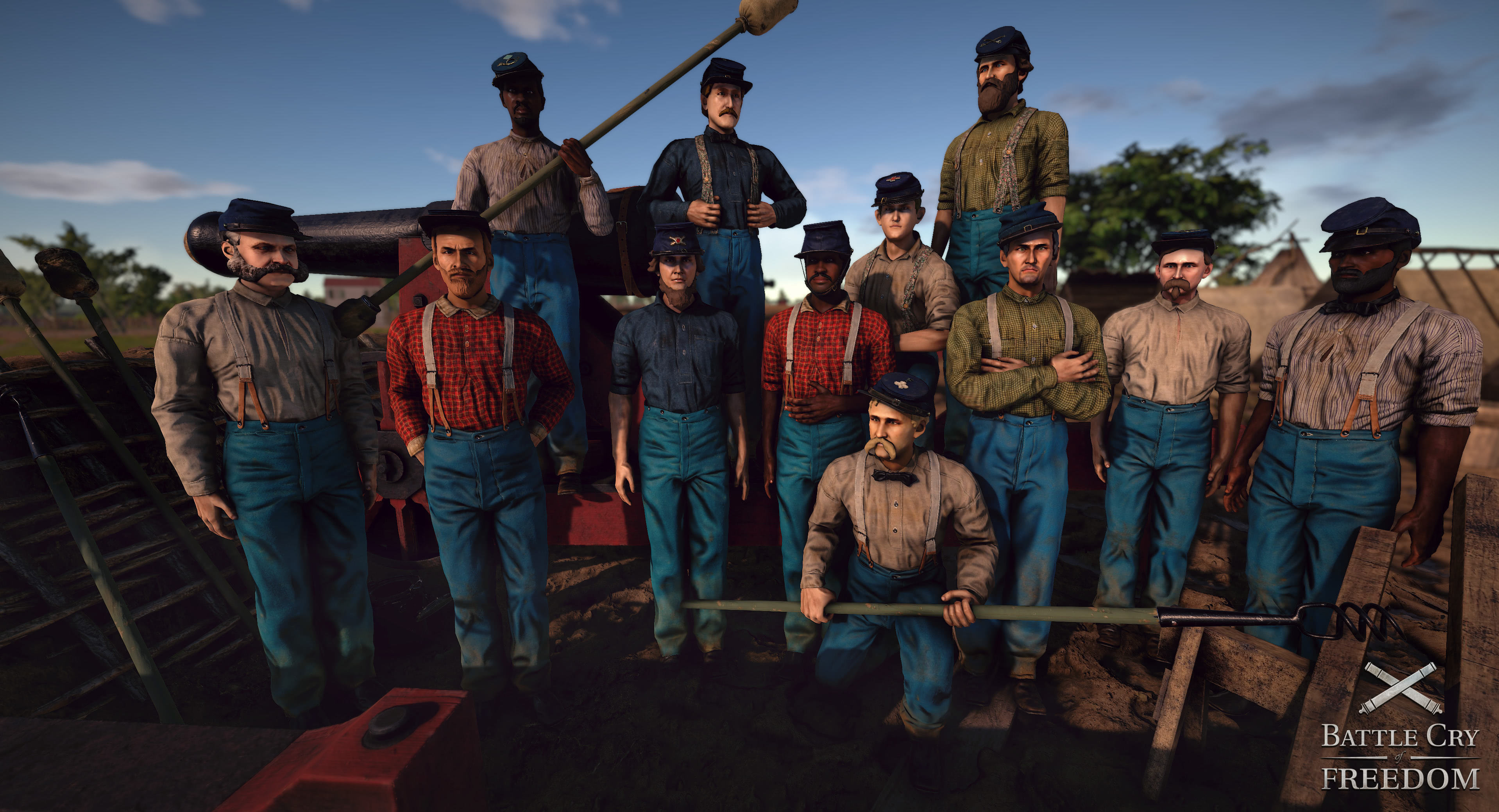 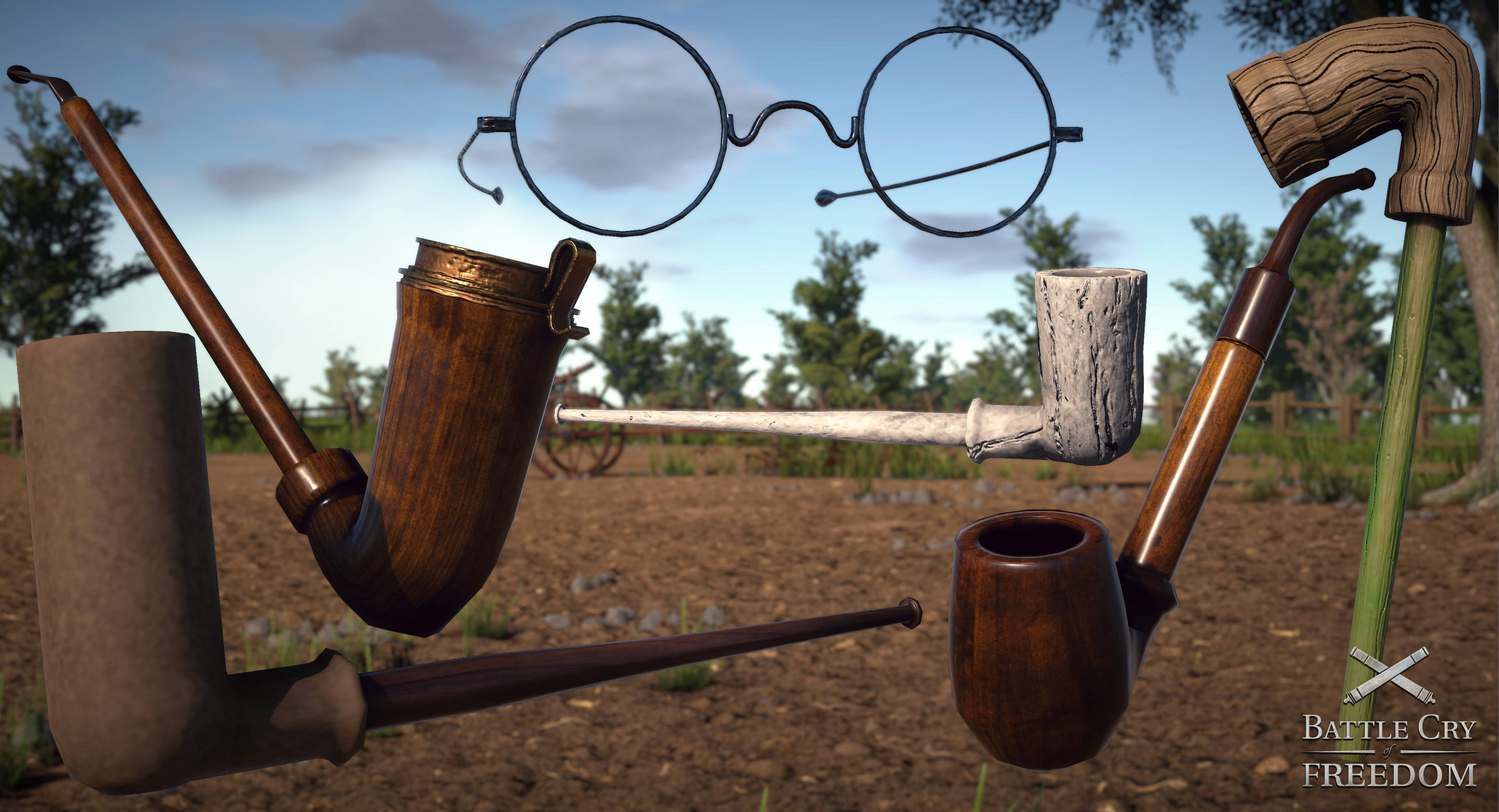 Weapons
We currently have over one hundred unique weapons in the game, each with its own graphics and unique gameplay (Read our previous Blog to learn a little about how our weapons perform within the ballistics system). As such, there is much to show. Here are a few screenshots of some of the more well known and important weapons in the game, none if which we have featured in previous blogs.

Historical Accuracy in the game
When creating a game set in the past, research and staying as close to reality as possible is one of the most time consuming and difficult tasks. It is extremely important to balance both historical accuracy and gameplay to make a fun but authentic gaming experience. Looking back at our previous game, Napoleonic Wars, we could have done a much better job on research. We did not realise it at the time, but we now have a much better understanding of the subject and how to do proper research.

We started re-enacting in June 2014 and joined a Dutch Napoleonic re-enactment group, that reenacts the “85ème régiment d'infanterie de ligne”. At first we thought that everything they did was historically accurate, but a year later we slowly started realising that most re-enactors are anything but historically accurate. This might be a surprise to anyone who is not in the re-enactment community, as it was to us. However, the truth is that most re-enactors do not do much research at all. Many re-enactors even make up their own facts, because “It makes sense”.

With that in mind we decided to instead form our own group that also tries to re-enact the “85ème régiment d'infanterie de ligne”. As we did our research we noticed more and more things that were wrong with our previous understanding of the subject and with re-enactment in general. Ever since then we have been trying to improve our performance/impression of the time and are still continuing to do so.

At about the same time, we also started our own Civil War reenactment group, the “110th Pennsylvania Volunteer Infantry”. Now with a lot of our research focused on the American Civil War, we started seeing more and more issues with our uniforms and equipment in the game.

Having started work on BCoF right after finishing Napoleonic Wars we barked up the wrong tree in a due to our poor research and general understanding of the subject. On account of this we decided to redo most of our models and textures for BCoF. Many of them were based on sloppy references and had problems. For example, their colors were wrong, their stitching patterns were all off and on some of them. even the scale was completely off...

Research for the game is now practically no different to the research we do for our re-enactment performances or as a historian might do it. Primary sources, originals and photographs are regarded as the only reliable sources. Secondary sources are only used if it is absolutely impossible to find anything else and preferably if they can be corroborated. This produces not only more accurate content but also much better looking content. Reality always looks better than some made up stuff, at least in period gaming. The problem with this approach is that since we are progressive re-enactors, this is our passion and we sometimes like to focus on unnecessary details like inspector and manufacturer stamps that no player will ever see...

Below is a small series of screenshots showing some of our old and new old equipment pieces like haversacks, knapsacks canteens etc. I am sure you will recognize the new models. 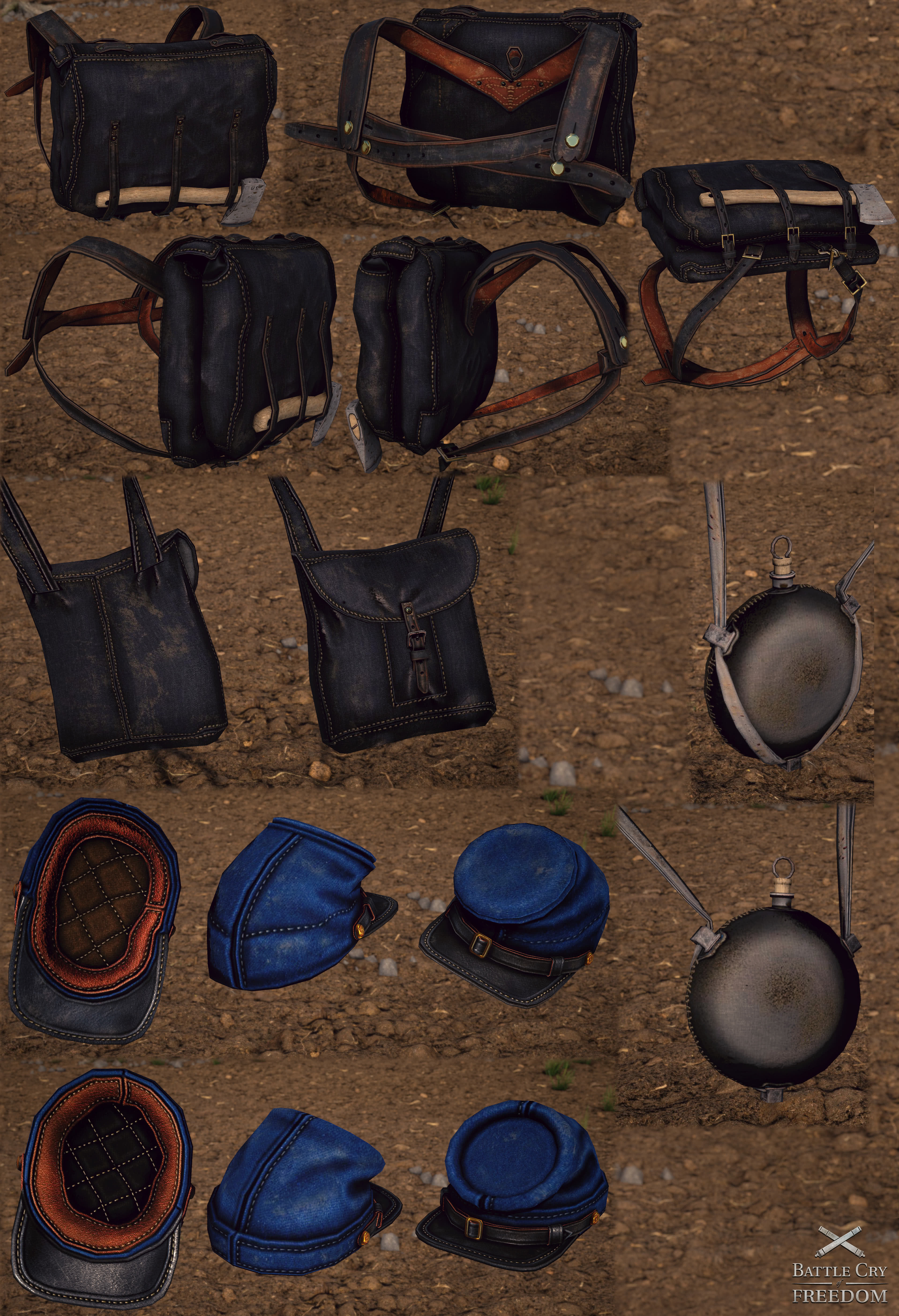 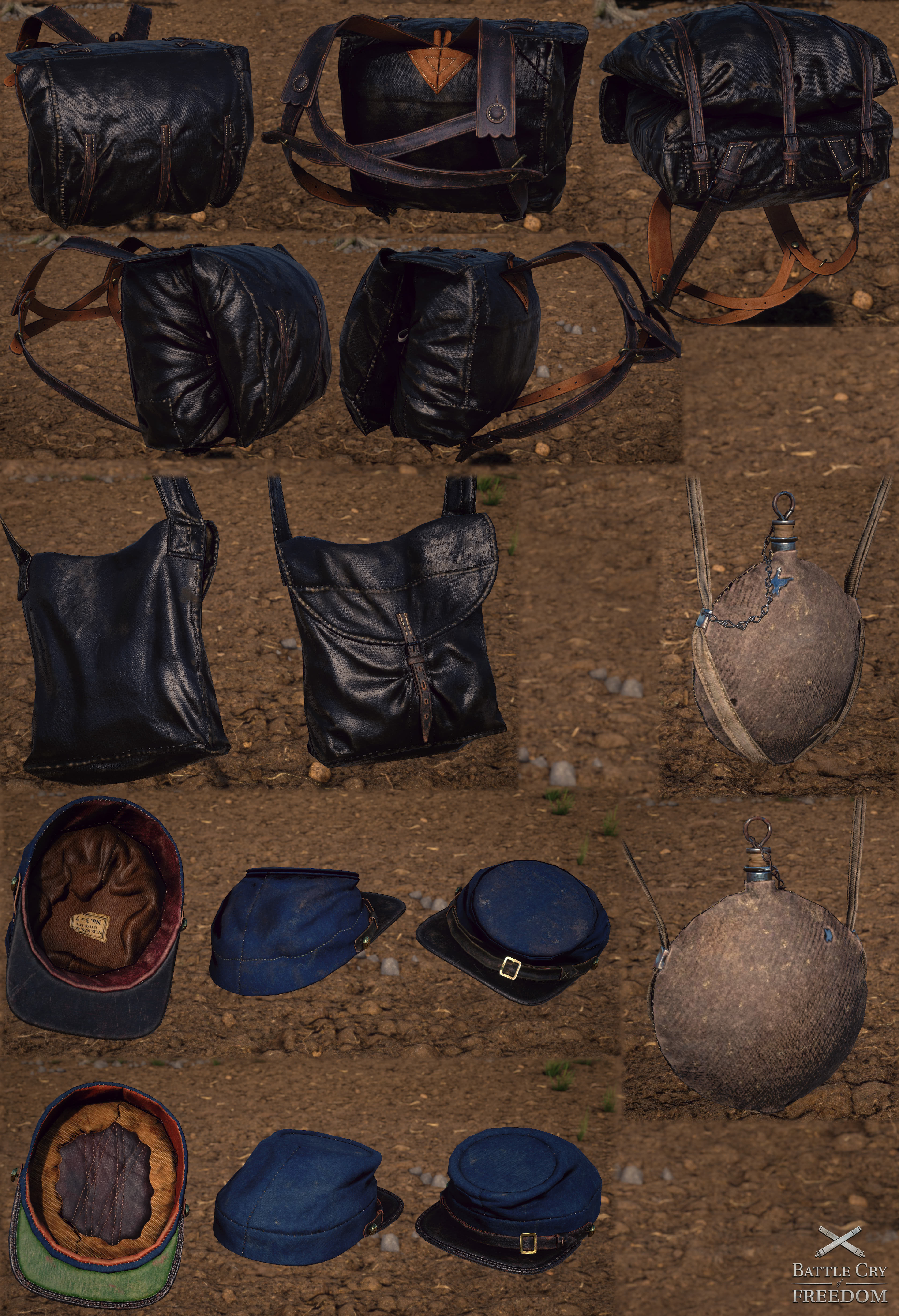 Despite that, in terms of gameplay we try to limit ourselves and we do not want to go into extremes. A game has to be playable and in certain aspects we have to cut corners to make it work. For example, if you were to strictly follow the drill manuals, many of the animations would take to long to execute and would destroy the flow of the game. To this end some animations have been sped up by cutting out movements. Some of the actions have also been combined and we also used different drill manuals to create more visibly distinct actions. For example, we are using both Hardees Revised, Gilhams and Caseys manual as a base for our musket animations.

The melee animations in particular had to be made up from scratch and are based on no real manual. We need each swing direction to look visually distinct from another and this would have simply not been possible if we had followed actual manuals.

With our small team it would also not be possible to make uniforms and equipment pieces for all regiments from 1861-65. Certain equipment pieces will be intermixed and worn in a way that does not strictly reflect history. Differences in the time period of 1862-65 are fairly minor though, and it should not be a big issue. For example, the backpack featured above is from 1864, while many of our units are based around 1863. We will obviously continue adding more content to the game during development and after release, so hopefully we will be able to create enough gear to represent all of the years accurately. 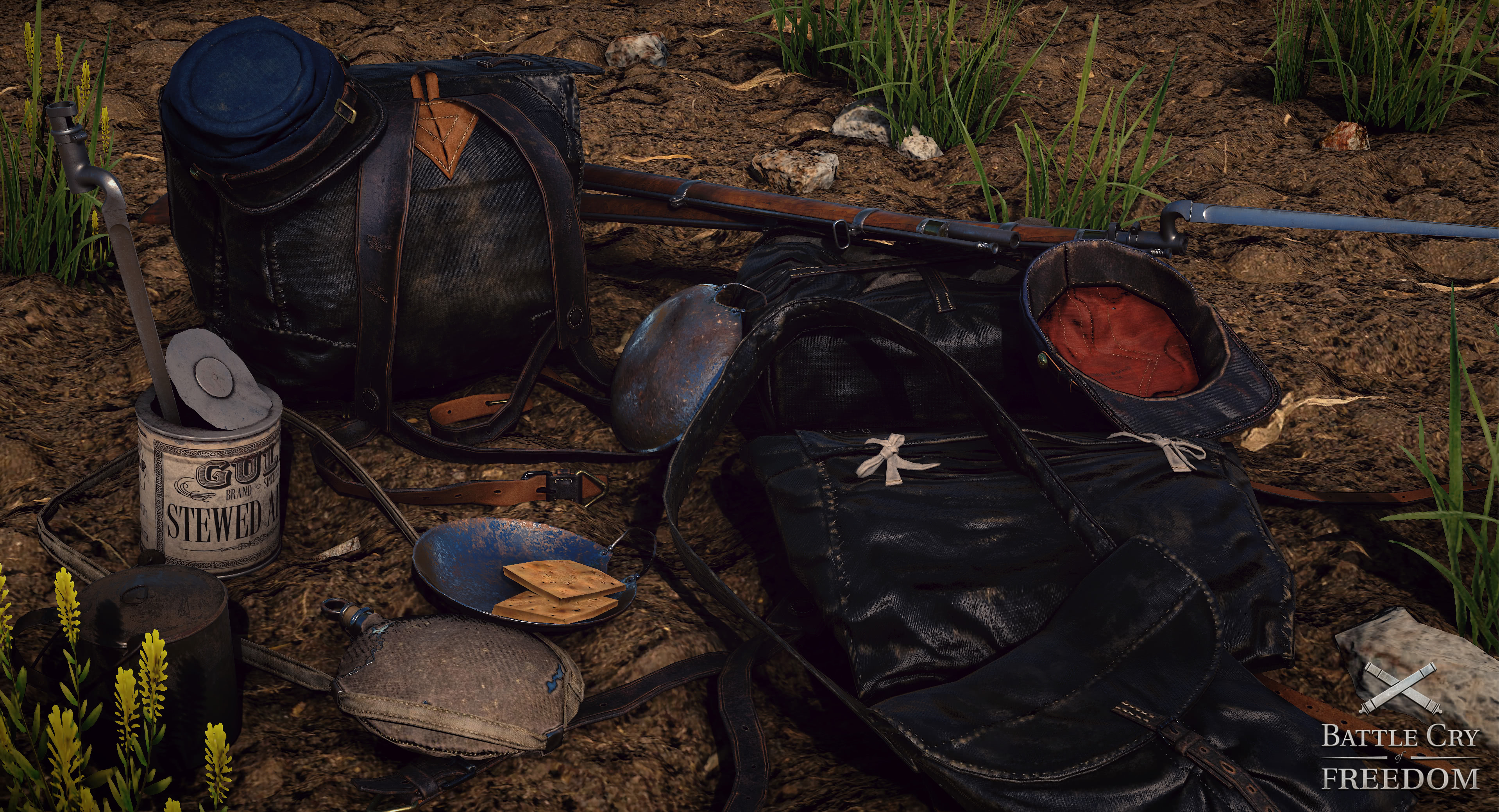 We admit that we have made mistakes regarding historical accuracy in the past and we will continue making mistakes. We are not infallible. As such we do not claim that our game is historically accurate, we merely claim to be inspired by history. There are various things in the game that we are aware need to be changed, but are very low on the priority list. For example after making all of the ammunition and ammo crates, we took another look into the ordnance manual and found out that some of our ammo crates and cartridges are wrongly colored. This will have to be fixed, but it is by no means a huge mistake. It certainly can wait until after release.

Anyway, we hope that you now have a better understanding about what we are trying to achieve in regards to historical accuracy in the game, and how we try to approach things.

Once again, thank you for reading this weeks installment of the Developer Blog and we will hopefully see you next week!
In next weeks Blog we will be talking about Graphics.


To take part in the discussion of this blog, click here.