Megabyte Punch is an electro beat 'em up/platforming/fighting game in which you build your own fighter. Every creature in the game is made of separate parts. Parts have their own powers and bonuses (like gun arms for a shoot ability) and you can attach them to yourself freely. You travel through different environments, search for hidden parts and battle other creatures for theirs. This is the adventure mode. Then there is the fight mode. Here you can fight other players in a destructible arena with the abilities your customized creature gives you.

The game takes place in an computer world filled with creatures called Megac. As a young Megac, you fight to enter the Grand Tournament, the biggest fighting competition there is, to compete for the title of strongest of the world!

We are excited to announce that Megabyte Punch is done and will be released August 6 for PC, Mac & Linux! After almost 2 years of development we have finished Megabyte Punch. Quite a lot of you already played the game in its alpha or beta phase (thank you for your support!). But looking at all the stuff we added, we think it’s worth playing the game all over again once the final version is released! 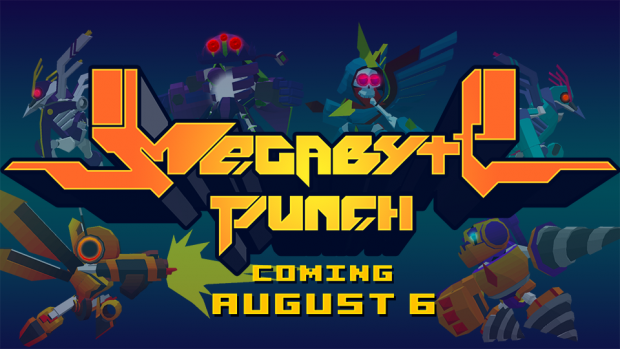 Update 11.5 was the last pre-release update, so there is enough new content to make the final release of the game look shiny. For now we’ll keep the added content and changes a secret, but you will find it out soon enough since August 6 is here in less than a month!

Unfortunately we didn’t manage to Greenlit Megabyte Punch for Steam in time for the release. However, we still hold a solid spot in the top 100 of Greenlight so if you keep voting and telling your friends about the game we might be able to release the game on Steam!

For now, just get hyped and expect an awesome release trailer soon!

After 1.5 years of development we are finally reaching the final stage of the game, we will announce an official launch date soon!

Megabyte Punch is updated! Again! As fitting for an update in Beta, lots of fixes and tweaks next to a lot of minor additions.

This is a technical article. If you're looking to make your own little brawler or just interested in how exactly the combat in Megabyte Punch works, this...

This is the demo version (standalone) of Megabyte Punch. (Updated August 6)

It's now on sale in IndieRoyale, in a bundle, with Steam onboard.

I guess steam keys are still taking their sweet time...
Is there any way for Desura customers to get patch 1.12?

When I click key in collection, it said I need to buy the Special Edition. Is this true? you said before everyone will get it. I paid full price for this, no discount or whatsoever. Except not a special edition.

How exactly will you be sending out the steam keys?

Exactly, it's been out for quite sometime. Will we receive a steam key?

is there a way to get a steam key yet?

How do I make a screenshot?

How do i get my steam key?

Yay, your game is on Steam!

Reptile is doing wonderful things with this game. It's art style, music, and gameplay are all wonderfully mature for an alpha state game. It's 100% worth what they're asking for it right now, and I can only see this game's quality increase with promised bug fixes, new parts, levels, and other features on their way. Reptile has shown themselves to be attentive to the concerns of the community and I have faith that this final product will be a very memorable experience. There are problems, but that…