MedievalZ is a multiplayer zombie survival game set in an early medieval setting.

Thanks for voting and helping MedievalZ on it's quest to become the 2022 Indie of the Year. You are now in with a chance to score some free games. Help this game secure more votes by embedding the widget (or link) we have included below on your favorite sites.

First of all, if you haven't checked out the Steam Greenlight page, make sure to stop by.

How do NPCs work?

Another option is to have them follow you while you roam the country side. You are able to configure their aggressiveness so when you encounter other players or zombies they will respond accordingly.

This gif shows the basic square formation following the player.

Roaming the countryside with your private army.

The following shows two groups of NPCs colliding in a battle of 2 players. For now the color of the NPCs corresponds to your faction color, which you can customize. In future you will have to supply the army uniform to your men.

You will be able to craft different weapons for your NPCs in order to make them stronger.

To hire and maintain NPCs you will also need suitable housing such as barracks and food and water to keep the army supplied. Money will also play a role, which will be discussed in a future Devblog which focuses on the Economy.

The following still from the above gif. 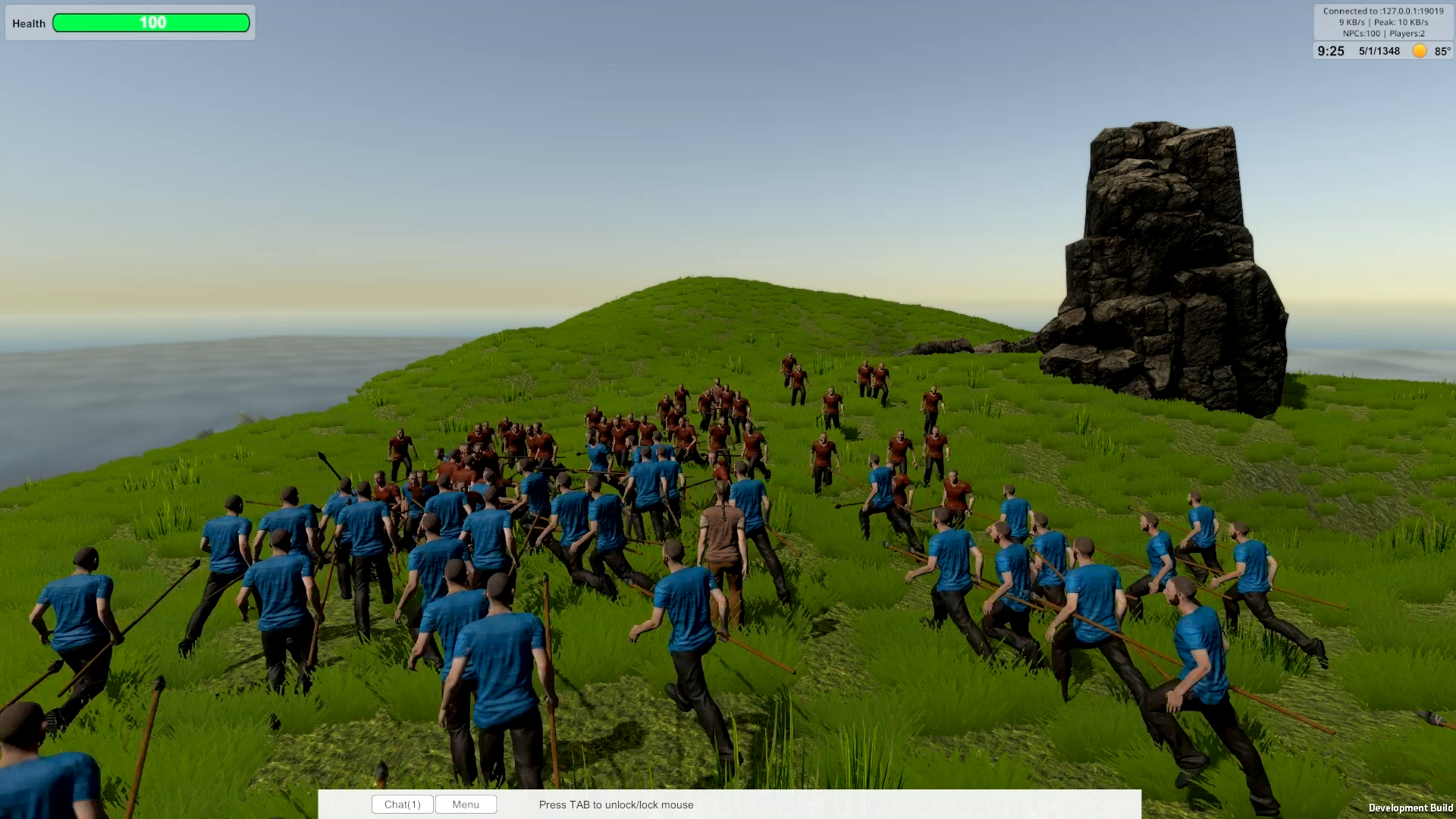 As you can see there are some stats in the top right corner which show the current server connection information. 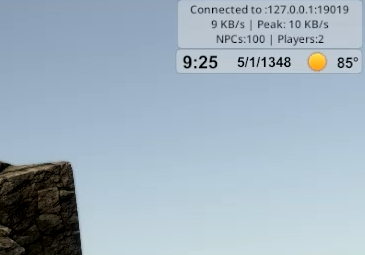 This is the image magnified. As you can see there are 100 NPCs (50 vs 50) and 2 connected players. The downstream is 9 KB/s (with a peak of 10KB/s) which is really low for a battle of 100 Entities. This is possible through the custom networking solution, which is written specifically for this game. I might go into more detail in a future Devblog if there is interest (especially from other Devs).

Thanks for reading and feel free to leave a comment,

Love the latest update. What you did with npcs formation and flocking to target is great. How did you work it out to have so many of them on-screen, is it because they're instances of the same? Very nice stuff, really like what you doing with this.

Seems ambitious but also definitely doable, so I'm interested in seeing this pan out. Keep it up! Cheers.

I'm going to track this because I love the idea of a zombie setting without guns, therefore i think it should be much harder than your usual "Z game" as you call it.

Progress looks good so far, although it isn't that polished, still looks great for this early in development.

A few questions i hope you can answer: Is it going to be a completely empty world only filled with other human players or are there some towns or villages with a few NPC survivors?

Second: Is there going to be a story how the infection came to be? Or are you just aiming for the pure survival aspect?

I wish you good luck in your further development!

It will be hard, banding together is a must (unless people choose to configure their servers in a way which makes it easy - you are free to do so)

There will be NPCs, however they are planned in later versions of the game. You will be able to hire them to protect your base.
Maybe even follow you, mount & blade style, however this needs testing (there is a reason why m&b campaign is single player only).
If there is a lot of interest in NPCs i might shuffle my internal roadmap around in order to implement them sooner.

There is a story, but it's low priority for now. Basically the world diverges from our timeline when the bubonic plague hits early medieval europe.
A mutation in the Yersinia Pestis strain causes the dead to rise in order to spread the plague even further. Some are immune, as in OTL, and band together to survive.

Thanks for the feedback,
Sunspear

I really don't think that forced cooperation is a good thing. Because you'll basically be screwing over solo players and discouraging them from purchasing this game.

Like I said, since everything is configurable you can choose what server you want to play on. Hardcore survival or casual PvE base building, it's both possible.