A 3D, physics driven, marble runner platform game in a futuristic setup. Get your marble through the tracks as fast as possible cause time is counting against you. Earn additional seconds by collecting pickups, make your life easier with using savepoints. Enjoy lovely backgrounds and music that reacts to your progress in the levels.

The game is developed for browser, i also have plans to port it later to PC / Mac (with slightly changed gamecontent to make it worth to play both versions)

You can play the game here :
Web : Wooglie.com

Marble Runner is live on Wooglie.com

I am happy to announce that Marble Runner got approved today and is now live on Wooglie. You can visit it here : Wooglie.com

Marble Runner is a web-based 3D marble running platform game in a futuristic setup. It features now 9 different levels and a Tutorial, but my plan´s are to improve further on this and increase both the amount and the size of the levels.


This is my first project with Unity3D and i am glad that it turned out that well. During the process of making the game i learned a lot about minimizing data for web-publishing, procedural textur making and the old mod-tracker music format. There is still much room for improvements and i have plenty of idea´s still waiting to get implemented.

One of the first design decision´s to get the total texture size down to a minimum was to use the "space / universe" setup for skyboxes - i have 4 different skyboxes and use only 5 different textures for it ( instead of 24 for a normal setup), one of them could maybe be procedurally generated.

During the first test-runs i tried various selfmade meshes but i wasn´t pleased with the results (3D modeling is my weak point) - so i decided to just use basic geometry shapes instead. I tried my best to get different levels out of this with each having its own flavour.

In the picture below you see one of those attempts, its my "Tetris" style level. 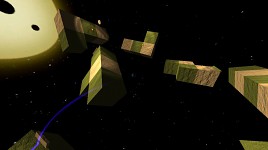 One important element beside the save-points and pick-ups (which give you more time - afterall its a time-challenge game) is the use of jump-pad´s. These aren´t just physic materials with a bouncing factor - that was not enough to get a interesting gameplay element out if it, Instead they apply a fixed amount of force to your marble when you collide with them. This single element got me some interesting level-design´s, (kind of extreme example in the next picture - the red boxes are the jump pad´s). 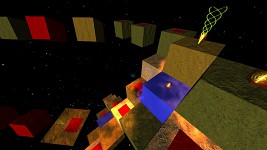 Another thing worth to note is the music system.
My first attempt with using selfmade MP3 files was very disappointing regarding file-size. Using WAV´s as basic (and getting them converted to OGG) wasn´t the best solution either. At this time the compiled project was like 900kb ... a single music file of like 2 mins music added another 3-500 kb on top of this. My next attempt was to split the music tracks down to several simpler sound-loops - for example one loop with the beat, one with a background atmosphere etc... and fill the levels with several instances of these loops - the cool thing about this is that during playing your progress in the level mix the music to the final result. A simple kind of modular / interactive music. My greatest thanks to my neighbour (a sound-engineer) who spend a day or two to compose the track for me.

The total size of the loops required was still around 400 kb, but atleast i could use them in different ways now.

The final solution (and probably the way to go for future projects) was to use mod-tracker file format. An older (and in my opinion better) format similar to midi. The last 4 tracks i used for the game (all under Public Domain license) take up like 300kb total and provide me with like 12-15 mins of music.

All in all i got my total file-size down to 1.36 MB - which seems pretty good for me (atleast for the first attempt).

For all of you still reading, (and maybe interested in trying out the game) - Thanks for your time and have fun with the game, i for sure had a lot during development =)

Uploaded a new video now, it matches the actual speed of the game better now - but i am still suffering from low quality / frame-rate drop while recording on my old laptop.

Interesting, Seems painfully slow, not sure if the ball is rolling slow or frame rate, but it is a WIP. Keep Going guys!

If this is based on the video, then i totally agree - it´s both: a sucky framerate during recording and a too slow pace ingame... but the vid is from a very early stage - i guess its time to record a new one.