In the Middle Ages, a war has broken out between 3 rival Kingdoms. Now it is up to you to choose your own kingdom to battle for for fame and glory. There is currently only 1 of the 3 kingdoms available, but the game is constantly being improved and expanded. By battling monsters, completing quests, and defeating other players you will gain fame and increase your kingdom's rank. The 3 main classes are: Warrior, Mage,and Archer, although you can mix and match(For example, a warrior uses spells or an archer uses robes). The Legendary Kingdoms Team hopes you enjoy the experience and we appreciate any feedback.

I have just put up a new version of Legendary Kingdoms Online for download. It is currently awaiting authorization, but should be up soon. The new version (Version 1.33) includes the following fixes and changes: 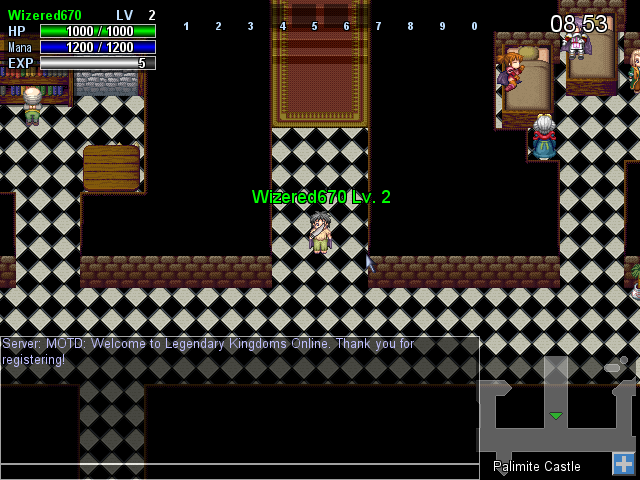 A screenshot of the new training dagger.

For now, the last release is still playable, but it is not recommended to play it.

I will be gone until Sunday after today, but I intend to keep the server up as long as possible. As always, I appreciate those that are playing and I would love to see some new faces in the game.

-Wizered67 and the Legendary Kingdoms Staff

Legendary Kingdoms Online is still being worked on!

Although there haven't been any recent updates, the game is still being worked on. I'm going to start working on expansion and quests soon.

After the first release of the game, I found some bugs that I wanted to fix. Here they are along with credits for various scripts in the game.

The first version of the game has been uploaded and is awaiting authorization!

The first release of Legendary Kingdoms Online will be very soon. I just need to get a little testing done and do some slight fixes. Also, a new message...

The official download for the first release of Legendary Kingdoms Online. New downloads will come as the game is improved, updated, and fixed. Just extract...

Development is currently at a stand still. I will resume work when I feel I am ready. In the mean time, the server is back up.

I've made one beginner quest so far. Expect it to be released tomorrow along with some fixes. Also, all new players will be given a training dagger with the new update. Existing players will not get this, although it is a pretty weak item anyway. You are much better off with a sword. After Wednesday, I will be gone until Sunday, but I will try to keep the game server up. It would really be great if we can get more people to join.

Trust me, I wish that too. Hopefully I can get some work done this weekend and next week (Spring Break!!!) and then release a new and improved version. In the mean time, I appreciate you playing and I would really appreciate if you could try to get some of your friends to try it.

Yes wen you make a new account or login make it you can create a character like warrior,archer,priest,mage,assassin

That isn't needed as you get to mix and match in game anyway. Although in the future you may get starting equipment based on a choice.

Does anyone have any suggestions for the next update?

Where did you get an ice spell? I don't remember leaving any in the game. And what do you mean there were more menus?

I left that in by accident. Will be gone in the next version.