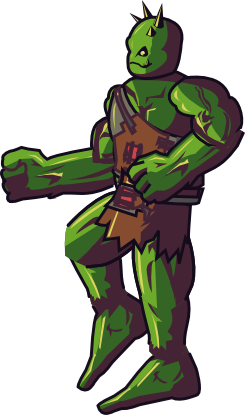 Thanks for voting and helping Jobchanger Brigade on it's quest to become the 2021 Indie of the Year. You are now in with a chance to score some free games. Help this game secure more votes by embedding the widget (or link) we have included below on your favorite sites.

So I'm extremelly happy to announce that Daily Espada has been accepted on Steam through it's Greenlight page!! For those that don't know, Daily Espada is a boss oriented action platformer which features monsters from Brazilian folklore, like a headless mule (a type of horse) that spits fire through it's neck.I had finished work on Daily Espada around May, then I started working on small side projects until I began working on Jobchanger Brigade, which has been my most ambitious project so far, you can take a look at it on the gif below:

Working on Jobchanger Brigade has been awesome, specially since I've adopted a different approach than in Daily Espada, with a more open development and frequent free preAlphas, until the game is ready to be sold. I've also learned a lot since I've last worked on Daily Espada, even though it's only been around 7 months. I've learned so much that I can't release Daily Espada on it's present state on Steam!

I mean, I love the game and what it represents, but I wanna update the graphics and the gameplay at least a bit. You can see some footage of Daily Espada below:

Here are some images of the updated graphics (the ones in the left are new, on the right are old):

Those are not final. They should also give you a clue of some new gameplay elements that may come.

So I believe it may take anywhere from 1 one to 3 months for me overhaul this game. This means Jobchanger Brigade's development will slowdown, but not stop completely. Yes, I'll try to keep developing both games at the same time, but Daily Espada will get priority and Jobchanger Brigade's alpha emission will no longer follow the biweekly format I had set before. I'm not sure on how often I'll be releasing updates for Jobchanger while Daily Espada is getting most of my attention, but I'll try to get something going for you guys.

You can buy Daily Espada right now from Itch.IO, Desura, IndieGameStand and my own website. They will all get updated with the Steam version once I'm done with it. I hope to be releasing a trailer for Daily Espada's new stuff soon!

Sorry for slowing down Jobchanger and happy new years, everyone!

Some new features which await the next alpha of Jobchanger Brigade!

Revamped charged skills, stun locking escapes and area GUI coming up in the next Alpha on December 27 (if the holidays let me, that is!)

Super skill for the Warrior, initial stages remade and some NPCs!

Customizable controls confirmed for the next PreAlpha, thank mister Flagrama!

I'll tone down the camera too, I think!

Sounds good! I'll be looking forward to it!

This is an interesting game. I definitely like the concept of it. The execution is a little bit sub-par at the moment, but I'm sure you'll make that better as development progresses.

My biggest issue is that I'm a WASD player, so I literally had to play the game with my arms crisscrossed which was very uncomfortable and kept me from playing anything more than the intro level. I do hope there is the possibility of key customization and controller support at some point in the future. I love being able to just sit back while playing a 2D game with a controller.

The camera is a little bit weird in how it works, and it is most noticeable when you fall a long way down to get the sword and the camera zooms right past where the player stopps moving and the I think the player ends up off-screen. The player character should always be visible near the center of the screen.

That's all I have to say for now, but I'm definitely going to follow this game to see where it goes. Good luck!

And so the time has come, to support customizable controls and buying a joystick to create... Well, joystick support!

I found a way to bind my controller to key inputs, so I guess you don't have to worry about it quite so much right now. I'll try to play through some more of the game this weekend to see if there is anything else I want to mention.

Where is the save data stored anyway? I couldn't find anything in my quick look-over of the usual places.

It should be on a folder called .prefs on your user folder. What are you gonna with it? Maybe it`s something I need to add in game! :)

I was just curious what kind of things you were saving and how. Maybe mess around with it a bit and break things. I like breaking things.

Is that JSON data in an XML document?

Yes, JSON data, I normally wouldn't use both JSON and XML, but it's the default of the engine

We seriously Need a Much Much More Games like this one on these Days , this is AMAZING!!!

Thank you!! Hope you'll like it even more as a I make it better!