The Sudoku has 10 different variants in one program. If you like to solve puzzles, you should pass away the time with Sudoku. All descriptions are in English and Russian. The Sudoku is most popular puzzle game of the twentieth century. At the heart of the game is the "Latin Square" Russian (Swiss, German) mathematics of Leonhard Euler. The first publication of the puzzle were known as "magic square". The name of Sudoku appeared in Japan in 1984. In our program we included 10 most popular puzzle game for 9x9 board: Sudoku Classic, Sudoku Kropki, Sudoku XV, Sudoku Geometric, Sudoku Odd-Even, Sudoku Trio, Sudoku Sum Frame, Sudoku Little Killer, Sudoku Distance, Sudoku Skyscrapers. Each puzzle has three level of difficulty, plus the opportunity to ask any difficulty level. You have a bonus! You should feel like a genius to solve the Sudokus from newspapers per minute. The program : support Landscape and portrait orientation, support New iPad, supported iPad Mini

1. According to numerous requests of our users added ability to set all of the digits of the candidates of a single button. This greatly simplifies and speeds up the process of solving a puzzle.

2. Fixed a bug clicking "Restart". Now when you select this menu item restarts the game on the same playing field.

3. Fixed the basic algorithm of the game, which increased the speed and stability of the game.

The project continues to develop. Looking forward to your feedback and suggestions. 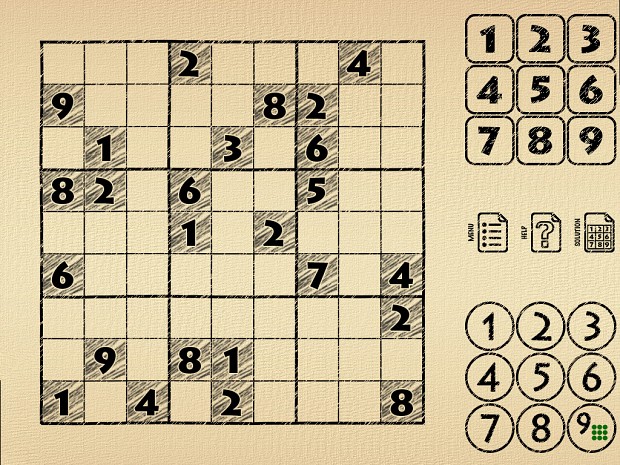