Take on the role as Jack Venture on a treasure hunt gone awry. Trapped inside a pyramid you must find your way out and along the way collect its hidden treasures. But be wary of the dangers lurking in the darkness. Only the most hardy treasure hunter will manage to find all the treasures and make it out alive. Jack Venture is a platformer designed around exploration, hidden in all of the 10 levels is 50 gold coins and 3 Ankhs. Most of the coins are easy to obtain but the Ankhs are meant to be hard to find. Most players wont find every coin and Ankh on a single play through. A level takes about 2-3 minutes to play which make it suitable to pick up and play on short breaks. There is two sets of controls available. One standard touch interface set up with virtual buttons for Left, Right, Jump and Fire. The second features a Tilt control for movement and virtual buttons for Jump and Fire. The Art, music and sound is inspired by the 8- and 16- bit era to give the game a retro feeling 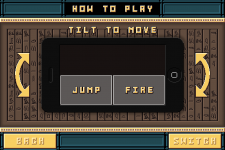 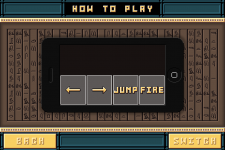 A Bug that caused the score on level ten to not save was fixed. Sadly a small bug was introduced that changed a sprite in the intro sequence to level 1. it has already been taken care of and will soon be rectified in patch 1.11 that will be out soon.

Jack Venture is now available on the Appstore! A lite version is on the way and there is a web browser demo available at mandibol.com/games/jack-venture!

I just bought the game. I like it a lot! Any plans on a iPhone 5 update?

i dreamed this game the other night without knowing it existed.. it was exactly the same graphics/gameplay and all... so very weird...

Rick Dangerous? This stirs up some memories... and the premise is excellent. I would suggest a PC version as well, once the iVersion is released and stable. There's a fine bunch of older gamers looking for such games for various reasons, and it shouldn't be too hard to port the game, I guess. Of course, this shall pay off if the market allows it (i.e. it's not saturated by clones).

Thank you. You are correct in that Rick Dangerous is an inspiration to the game, I played it alot back in the days. I am using Gamesalad as the engine, so I can currently publish for iPhone and Mac, they are working on support for Android and the Chrome Store. So it is a real possibility that it may become available on PC at a later date.

Yeah I agree ... its a pity and a waste on potential gameplay x] would love to play the game but would never buy any ISpy product for that ..