Take on the role as Jack Venture on a treasure hunt gone awry. Trapped inside a pyramid you must find your way out and along the way collect its hidden treasures. But be wary of the dangers lurking in the darkness. Only the most hardy treasure hunter will manage to find all the treasures and make it out alive. Jack Venture is a platformer designed around exploration, hidden in all of the 10 levels is 50 gold coins and 3 Ankhs. Most of the coins are easy to obtain but the Ankhs are meant to be hard to find. Most players wont find every coin and Ankh on a single play through. A level takes about 2-3 minutes to play which make it suitable to pick up and play on short breaks. There is two sets of controls available. One standard touch interface set up with virtual buttons for Left, Right, Jump and Fire. The second features a Tilt control for movement and virtual buttons for Jump and Fire. The Art, music and sound is inspired by the 8- and 16- bit era to give the game a retro feeling

Jack Venture is now available on the Appstore! A lite version is on the way and there is a web browser demo available at mandibol.com/games/jack-venture!

Jack Venture is now available on the Appstore! 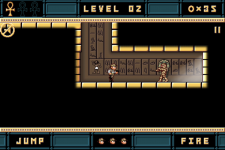 Head over there and check it out!
Link: Jack Venture

The Lite version is still in review and will hopefully be available soon for those of you who like to test games before you buy them. Until then there is also a playable web browser demo available at my website here.