Hacktag is a 2 players infiltration coop game with asymmetric gameplay.

The player and his partner perform missions either as the on-field stealth agent or the hacker who infiltrates the same level from his computer. The asymetric gameplay and the procedural generation levels are designed to make the players feel like in a heist or spy film genre adventure.

The main features are :

- Infiltrate together with an asymmetric gameplay
- Procedural missions offering always different objectives and places
- Unique stories for each player
- Cooperation and communication are two core features needed to achieve successfully missions.
- Online challenges, rankings and leaderboards in order to prove player’s group superiority
- Upping reputation through corporations and signing your acts
- Creation and personalization of your anthropomorphic character

Hacktag has been greenlit a week after the launch of the greenlight page. 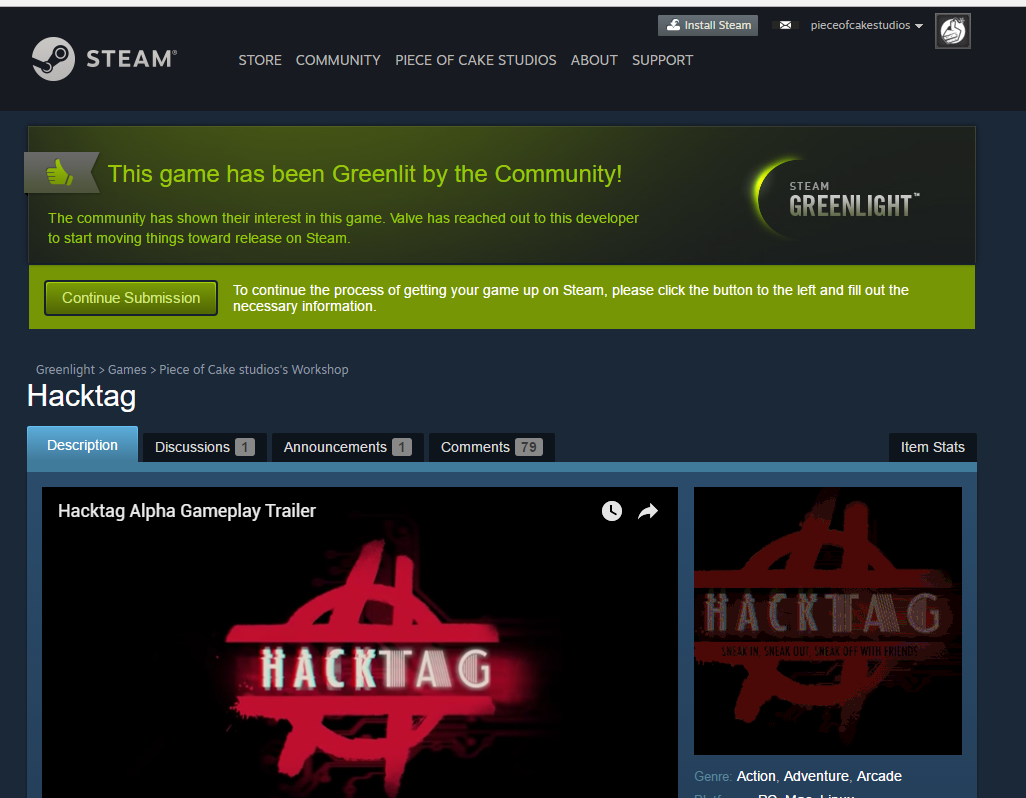 It was our first Greenlight page ever launched, and we created it in 2 days inbetween GDC and PAX East. (+ a week of work before to make the short trailer). As we are almost close to the end of the development, we were able to show a lot of gameplay features and content through cool gifs to make the game attractive.

The other great help we had came from the players we've met during PAX East. We had very positive feedbacks all along the event and we encouraged people who liked the game to vote for the game (Some of them even get rewarded with cookies - you cannot called your studio Piece of Cake without bringing cake or cookies at conventions ;-) ).

We are very thankful to all our voters and the persons we met during GDC and PAX for their advices and support.

Now that we're greenlit, we are happy to finally start working on the integration with steam. (even if it means more work...Yay !)

Hacktag is now on Greenlight!

Hacktag, the 2-player co-op stealth-game with an asymmetric gameplay is now on Steam greenlight. Play as the stealth-agent on the field or as the Hacker...

Last week-end, we featured Hacktag at a public event for the very first time after less than 3 months of full production... And we had a pretty great...

Here is a sneak peak of the infiltration gameplay of the stealth agent in Hacktag. A coop-stealth game with asymetric gameplay.

Here is a quick presentation of the studio behind Hacktag.

So are there any actual screenshots of the game?

here is a first screenshot (work in progress).

Interesting, reminds me of Deus Ex: Human Revolution areas. I'll track. Do you plan to showcase gameplay footage in the near future?

we published an animated screenshot last saturday on twitter if you want a sneak peak :-)