A multiplayer text-based dungeon crawler that currently runs through a Discord bot. We will soon work on a dedicated client, but for now you can play it through our Discord server. (the link is at "homepage", to the right)

"Oh, what do we have here, another brave soul? Or perhaps another fool..."

"Did you come for the treasures?
For the magically enhanced abilities?
Maybe it is the thrill of the fight?
Or I guess you could just be bored."

"Well, in the end it doesn't matter. What matters is that you want to challenge my dungeons. Let the results speak for themselves.
Welcome to Grandest Delvers!"

Grandest Delvers is a multiplayer text-based dungeon crawler.
A MUD, if you will.

If you want to play it right away, find us at our Discord server.

The game is played by typing in commands, such as "go north" or "attack goblin", a considerably simplistic interface, that serves the main purpose of this project:

Making a complex game out of simple parts,
all of which interact with each other.

Some of those parts, or systems, are already there: 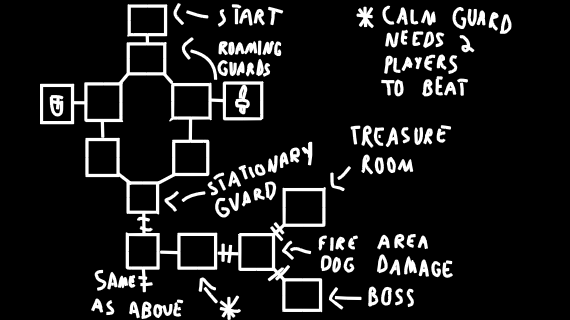 The dungeon, with switches, seals and its denizens.

The foundation of the game, we're constantly adding new features and improving it.
A simple base with a flexible event system allows us to set all kinds of challenges, traps and rewards.

That helps us whether we're making puzzle-oriented dungeons, spicing things up with a more dynamic response to combat (maybe if you take too long to beat that captain, he'll have time to call his subordinates) or just setting up nice rewards for those who think smart or pay attention to detail.

The items, with keys, equipment and consumables.

We're also developing the items a fair amount.
On one hand, there are consumables that can have all sort of effects or key items that interact with specific parts of the dungeon.
On the other, we have equipments that change your status and allow you to train specific skills.

Right now, this is not terribly developed, but we do have many plans.
The consumables can be virtually anything, so they'll naturally get way more interesting with time.

The key items are similar, though they depend on dungeons, so there will be more interesting possiblities as we create more levels. In particular, they allow us to connect one level with another.
You might raid a military outpost and find an intricate key with the family crest of the lord of another dungeon's castle. Why not try it out somewhere in that castle?

And the equipment are the most interesting.
Even without mentioning their potential once we develop the crafting game, their functionality clearly grows whenever the game's mechanics evolve, be it new damage types, the noise system or more complex aggro mechanics.
All of those greatly increase the possibilities equipment-wise.

The skills, with different mechanics for each class and experience gained by use.

We wanted to move away from the classic "kill monsters, get points, turn them into numbers" formula.
We also wanted to connect them with the items, so here's how they work:

Want to train "slash"? Damage some foes with it. "Heal"? Cure some wounds. "Search"? Look around and find hidden things.

On one hand, that removes senseless logic like "I became the best healer in the world by smashing goblin heads".
On the other, it has interesting side-effects, such as being able to train an offensive skill by attacking your allies. (think sparring)
All in all, it should make for a more organic experience.

And then there's the classes. The four basic classes may look boring, since they were made to fit the archetypes for a balanced party, but there's more hidden beneath the surface.
Each class has a different skill use mechanic.

-The Warrior has a global cooldown, a strict but simple restriction.
-The Mage uses mana, which allows for a burst of spells, but requires peaceful resting to recover.
-The Healer has to cast their skills, which will fail if they're interrupted.
-And the Scout has situational skills requiring smart thinking in order to be effective.

We've started with the stereotypes in order to have an easier time building the system, but the foundation we're laying will allow for a great variety of classes in the future, such as:

-An arcane trickster, who achieves magic-like effects by using ambient mana, but has to wait for the mana flow to recover before doing it again.
-An honourable paladin, who needs to yell out all of their attacks before performing them.
-Or a dimensional assassin, that can freely move through tears in space, but has to rest every now and then in order to recover the after-effects of using such distortions.

Other systems have been designed, but not yet implemented, such as the noise system and the crafting game:

The noise system will make for a naturally smarter enemy AI and more interesting PVP confrontations.

This one should be fairly simple to implement, while having very interesting repercussions.
The idea is that most actions will generate noise, which can be heard by players and monsters as long as their hearing is good enough.
Pretty straightforward, right?

For monsters, that will affect their AI. If a rabid goblin hears a human voice, it'll probably charge in that direction, looking for prey. If a trained guard does, though, they might calmly go investigate. If they hear clear battle sounds though, they might raise an alarm first.

For players, they'll receive it as a message, and it'll be up to the player to interpret it.
You just heard quiet steps a couple rooms away and you're almost dead. Should you run and hide, since it might be an enemy or should you rush towards them hoping it's an ally?

And as a bonus, this could allow for more stealth-oriented approaches.
One could sharpen their senses in order to figure out their surroundings while softening their steps in order to blend in.
It'll probably come way more heavily into play in strictly pvp matches.

And then, there is the crafting, which should become a game of its own.

The crafting game won't be text-based nor will it be merely a minigame.
It will, however, interact with the main game. The concept is that you'd gather material items in Grandest Delvers, sell them in the market which will resell it, or directly to a crafter and then the crafter will use those materials, then selling the resulting item.

And since we want it to be a game on its own right, we will take the crafting aspect and develop it as much as possible.

Sure, you can always just get a piece of wood and shape it into a stick, but if you really want the best result, there are all sorts of procedures that can enhance the result.
Changing the base form, painting it, carving it, adding details, enchanting, all of those will modify the item somewhat, and the quality of each execution will affect the end result.

Since this will be an actual game, it's still pretty far away, but we will gradually prepare for it by adding features to Grandest Delvers.
The first things we wish to do are adding materials as drops in the dungeons and a market that will buy them and sell possible examples of crafted items in return.

Once we develop the concept a bit further we might add NPC crafters in order to display the planned dynamics between a crafter and a delver.(such as the process of hiring a crafter)

We wish to develop Grandest Delvers together with you, our players.
Many developers nowadays are doing this, and we believe it is the way to go.
Thus, we took steps in order to more easily talk with the community.

If you want to play the game, you can find the main bot on our Discord server.
We also have a public Trello that you can check if you want to know what we're working on.
And finally, we're running a Patreon and trying to stay indie.
If you're interested in what we're doing, consider becoming a patron,
we have a bunch of amusing prototypes that we'd like to show over there.

The Island of Eternal Struggle Party Based

Origin Of Destiny Party Based