FullBlast is a retro style vertical Shoot'em up that will delight nostalgic players who have grown up playing SHMUPS on arcade machines.

FullBlast's graphics are inspired on titles from the 80's and 90's, but using current technology and visuals, so it may result also attractive for the new generation of players that could discover a genre largely untapped today.

Regarding gameplay, FullBlast features classic SHMUP mechanics, this is not a bullet hell game, it is a fast paced action game, but more like the old classics.

The game features a story campaign of 12 random levels. As usual in every game of this genre, mankind is at the verge of extinction due to alien invasion and you're the last hope to save the world, so take the control of your powerful fighter and upgrade your weapons to kill thousands of alien ships and creatures.

Thanks for voting and helping FullBlast PC on it's quest to become the 2022 Indie of the Year. You are now in with a chance to score some free games. Help this game secure more votes by embedding the widget (or link) we have included below on your favorite sites. 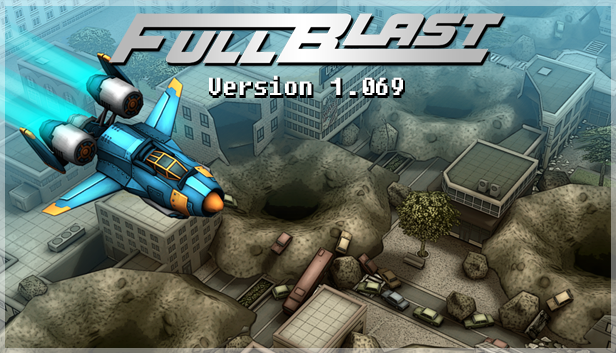 This version comes with some bugfixes and improvements:

-Fix for issues on plane particles when restarting a level

-Fix for visual bug on colored enemies when receiving impacts

Moreover we've launched our major discount from the release: 50% off this week only!

FullBlast has been released on Steam!

FullBlast the old school SHMUP with modern visuals is finally out on Steam!

FullBlast has been Greenlit and its Steam store page is already available, so the Community Hub for our game is also ready for use and it can be added...

FullBlast has been Greenlit

FullBlast has been Greenlit in just one week, many thanks to all of you for all your votes and support!!!