Freedoom is a project to create a complete Doom II-compatible IWAD file which is Free Software' The IWAD file is the file used by Doom which contains all the game data (graphics, sound effects, music, etc')' While the Doom source code is Free, you currently still need one of the proprietary IWAD files from id in order to play Doom' Freedoom aims to create a Free alternative' Combined with the GPL-licensed Doom source code this will result in a complete Free Doom-based game' The Freedoom project has already succeeded in creating a complete set of replacement textures for the original Doom games, as well as a large amount of extra material (sound effects, graphics, sprites, etc)' All of the Freedoom material can be freely redistributed, modified and reused without restriction provided credit is given to the project' 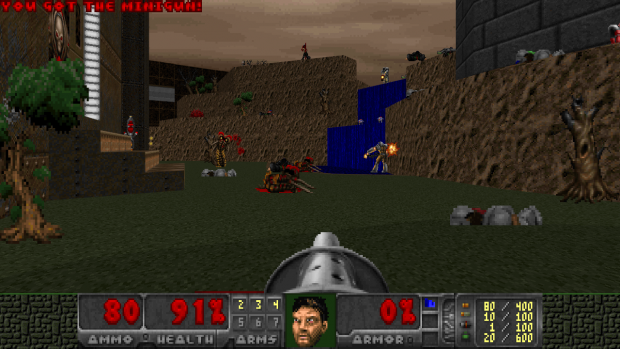 v0.11.2
Missing multiplayer starts have been added to several levels. No map should be lacking anymore.
A few mapping errors were repaired by changing sector heights. Speedrunners can better appreciate smooth flow through the levels.
Easy and normal difficulty levels have been tweaked.
Par times for Phase 1 have been added.
Cleaned up title screen using the Freedoom font for Phase 1 and Phase 2 on screen.

v0.11.1
1% armor bonus pickups are recolored from red to green. They were too easily confused for health pickups.
New TNT: Evilution-compatible textures.
New pain bringer and pain lord sprites, replacing old concept art-derived ones.
A few map errors are fixed, including misaligned textures, leftover Boom specials, and it should no longer be possible to get stuck between a rock and a tree in Phase 1 C1M1.
Brand new Phase 1 C3M1, replacing an old Doom-inspired level.
Widescreen statusbar for ZDoom was removed. This created incompatibility with some mods, and mod compatibility is prefered over visual enhancements.
Fixed intermission text after using the secret exit in Phase 2 MAP31, where obituary texts were incorrectly displayed instead.