Fight your way across the celestial world of Avalice where cats are green, motorcycles drive up walls and monster girls do most of the buttkicking! Freedom Planet is a cartoony, combat-based platform adventure that pits a spunky dragonoid and her friends against an alien attack force.

Freedom Planet creator Strife explains the origin of Lilac's design and the game's various homages to Sonic the Hedgehog.

Freedom Planet's demo has been released for almost a week, and I feel grateful and honored that we've gained so much exposure in the indie gaming community! We’ve been mentioned by the likes of IndieGames.com, Destructoid, EuroGamer, and The Indie Game Magazine. I was also asked to do an interview with Alpha and Omega Radio a couple weeks back, which is now available on their website for your listening pleasure. And that’s not counting the dozens upon dozens of gameplay videos that have been uploaded to YouTube by our new fans. Some of them have even helped me track down bugs and make tweaks to the gameplay to make it more balanced and accessible, which I am definitely thankful for.

So, what now? I may take a break from actual programming for a bit so that I can put some serious work into the first draft of the script for Story Mode. I have an awesome team of voice actors who are itching to do some work, so I definitely want to get the script ready for them as soon as possible so they have something to do.

I’m also thinking that the story is where Lilac’s originality will shine through the most. It makes sense that she’s almost universally been associated with Sonic so far, because there’s literally nothing else to go by except her appearance and gameplay style. Which, of course, brings me to the main purpose of this article: Freedom Planet’s similarities to Sonic the Hedgehog, especially with regards to our main character.

Sonic zoomed into our lives in the 90’s and kicked off an entire era of mascot-based platformers. The legacy of the Blue Blur is firmly ingrained into the history of gaming, much like other gaming icons such as Mario and Pac-Man. Of course, many companies wanted to capitalize on the success of Sonic, and so an entire line of “Sonic clones” came into existence: Bubsy, Aero the Acrobat, Socket: Time Dominator, Jazz Jackrabbit, and more sought to capture the edgy nature of Sega’s mascot - some to pay homage, others for quick cash. So, what’s the deal with Lilac? 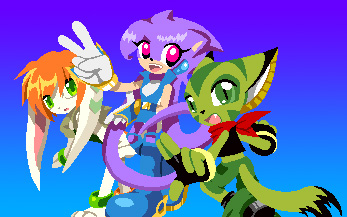 Freedom Planet originally began as a direct homage to Sonic. If you’ve ever seen our beta video of Dragon Valley, you will have noticed that there were rings in there at one point and Robotnik was still slated to be the main villain. As work on the game continued, I felt more and more like it was becoming a waste of time because I was ultimately creaing something in the shadow of an established franchise and that it would never truly be my own work. So, I set out to try and design a main character that would pay homage to my main source of inspiration while still being unique enough to stand out on her own.

My personal attempts at designing a protagonist failed. After dozens of failed attempts, I realized I needed help, and after a long time of searching, I discovered a Chinese artist named Ziyo Ling on DeviantART who created just the kind of heroine I was looking for: Sash Lilac. The design of this character captivated me from the beginning, as well as the designs of her two companions, Carol and Milla. I felt that the three of them combined would present me with a lot of opportunities for interesting character dynamics. So, I asked Ziyo for permission to use them in the project. She was very excited at the idea of her characters appearing in a game, so she agreed to let me use them. She continues to support our efforts in spite of her recent absence from the Internet, and I have assured her that I will continue to credit her as a lead character designer.

So with not one, but three character designs that I was happy with, I felt like I was going in the right direction, and my watchers continued to encourage me to separate the game even further from Sonic. Rings were replaced with a health system involving crystal flower petals. The mad scientist Robotnik fell to the wayside in favor of an alien warlord, Dr. Brevon. Abilities were changed and tweaks were made to the gameplay to give the game its current personality and style.

Freedom Planet is no longer a fangame, but an indie title that makes no attempt at hiding its roots.

There's definitely more where that came from. Thanks!