Ted wakes up from his drunken stupor in a land he is not familiar with. Suffice to say, he is not happy about these turn of events. Engage with Ted in a comedic world where logic does not exist and purple cats are enemies.

Final Warrior Quest is a parody JRPG. All of the writing and design was done by one individual. Music, except for two tracks, was done by another. 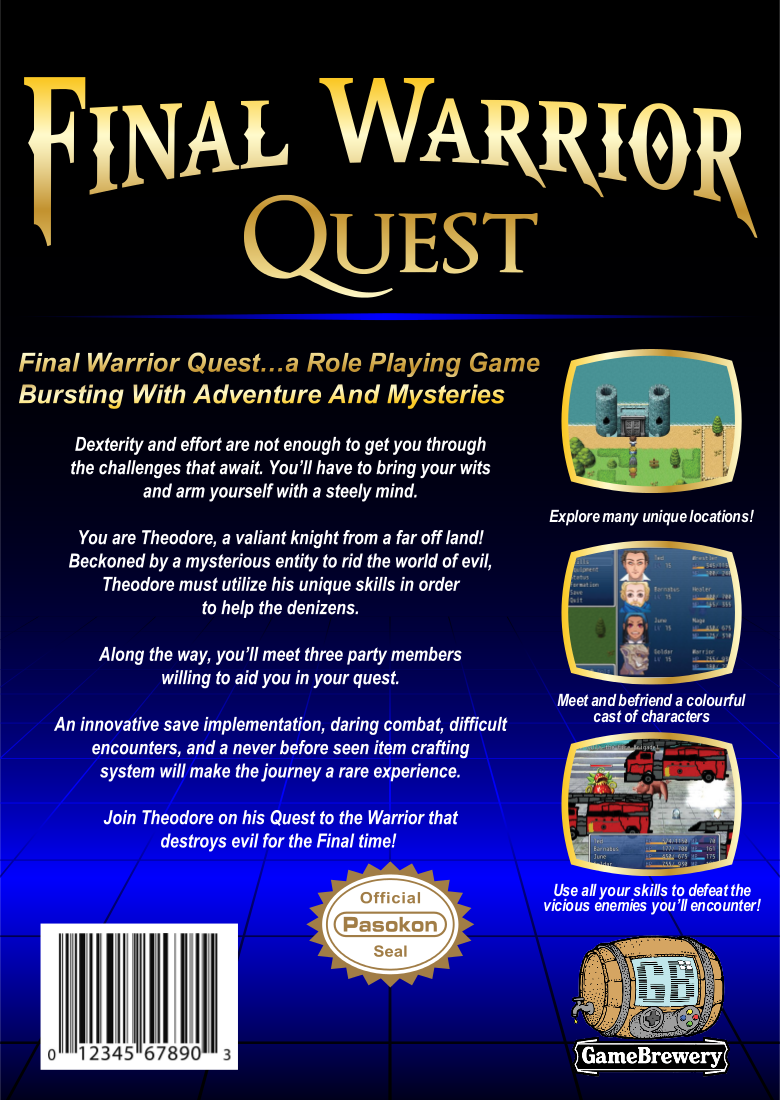 As Desura died, I failed to find a proper home for Final Warrior Quest. While it has been accepted into Steam, I have taken my team in preparing the submission and setting up the page. In the meantime, Final Warrior Quest has been released on itch.io for free with a suggested, but not mandatory in any way, donation of $0.25.

I am very proud of this little game and I hope those that take the time to check it take the same enjoyment I do from it.

ReeCeDoW has finished his Let's Play of the Final Warrior Quest Demo. Since the demo is, roughly, 30 minutes long it is a short series.

indieDB's very own ReeCeDoW is doing a Let's Play of the Final Warrior Quest demo.

Final Warrior Quest has an official release date! Pre-Orders are available! A price has been an announced! This is our most important news update yet...

A demo for Final Warrior Quest. It is approximately 30 minutes in length. It is the first section of the game.

So here's the final part ^^ left my review at the end Youtube.com

Thanks a lot, ReeCeDoW! Appreciate it.

All of Ted's skills are kind of bad, rough, or messed up. The in-story reason for that is since he's not actually from that world his attacks appear differently. All the enemies and your other allies have the same visual style.

The demo is short because it's only a 4-7 hour game. After that boss battle felt like a natural progression. The player is introduced to the story, combat, crafting, a party member, and a boss battle. It's a good snapshot of the game in a condensed time.

Anyway, thanks a tonne! Glad you liked it.

Not a problem!, and i can see what you done there its still decent skills tho, it will prove easier for the player if they pick fireman.

And It's still great for a demo, so it was a good snapshot since it showed really good elements of the game.

And again not a problem!

No problem. Glad you liked it! Looking forward to part 2.

So I've finally gotten around to trying the demo out, I'll hopefully get my first video of it out soon, but i need to know, how do i remove the tree stumps?

Yup, just click on them after picking up the shovel.

I'll be posting a news story about the release date soon. Desura has informed me that it is November 13th, though.