Fawar is 2D topdown Roguelike ambiented in a horror post-apocalytic era. Feel the torment of the wasteland trying to resolve his mysteries. You can choose to help people or be the new monster in the land. This is a game that is made from desicions. Choose your own path in a big world.

Fawar is on Kickstarter now! 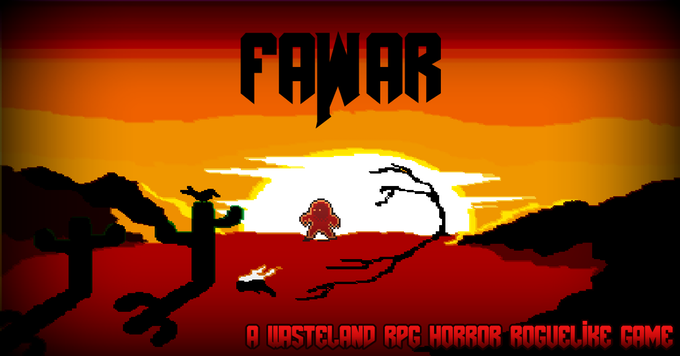 Fawar is on kickstarter! We want this game to be a reality and we need your help to achieve this!

We, qugen, developed games since 6 years ago. We are brothers, and we always wanted to do videogames, as every indie developer, we have a dream, but we know that is very hard to achieve this because of money. We need you! We have worked in other projects, this is not our first videogame, we have a large portfolio since 6 years ago. Now we are ready to became a true indie warriors. We want to give you that retrofeeling for all the nostalgic generations! We believe in retro with fawar, a game that will give you that sensation of mistery, unknown and adventure! Let us show you Fawar!

"I don't think that I have known something such as the end of the war. Those who have known it are the dead who no longer exist in this life after the catastrophe."

Mankind was plunged into chaos when governments found a way to induce his people to war, using his faith as a weapon, by using psychotronics - remote machines capable of controlling the human brain. The GrayBeat project was developed by the upper echelons of society in a world under crisis, poverty, hunger and thirst. The project, created to implement audio and false images directly in the mind of the human being to create the Apocalypse, was the trigger for a war enraged. The governments of the Earth, plunged into panic, started a nuclear war, where millions died destroying everything in its path, leaving a few chosen and waking up to other more ancient, legendary, mysterious or mystical. New global communities borned trying to rebuild the life as it was before, however, the place to which earlier used to call "Earth" had been ravaged impeding its reconstruction. Different groups had been born with a variety of very large targets. While some are looking for survival, others seek power, other maintain a normal life, some just want to see the world burn, others seek equality, others fix the environment and the darker ones wants instantiating a new world order. What will be the path that you are going to choose?

Fawar is 2D topdown Roguelike ambiented in a horror post-apocalytic era. Feel the torment of the wasteland trying to resolve his mysteries. You can choose to help people or be the new monster in the land. This is a game that is made from desicions. Choose your own path in a big world.