The epic quest of universal domination continues! EvilQuest 2 is an exciting upcoming Action RPG that offers players the chance to play as the ultimate villain rather than the tired and repetitive role of “world saving” hero.

EvilQuest 2 is built with a retro aesthetic reminiscent of classic 16 bit SNES era RPGs, but rests on a solid bed of modern gameplay mechanics and sensibilities. Expanding on its hit 2012 predecessor with an engrossing story mode and an innovative endless world conquering game mode, EvilQuest 2 promises to stretch the Action RPG genre past its traditional limits. 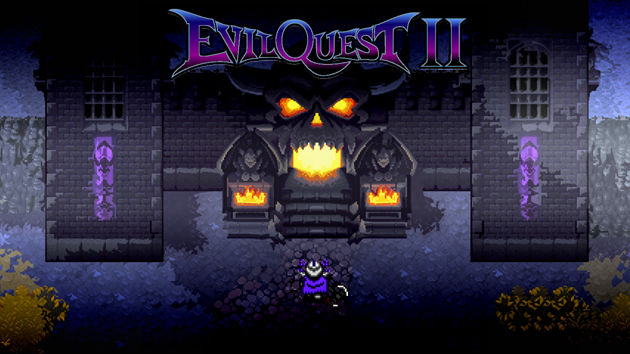 After the destruction of God and the annihilation of his home world, The Grand Demon Galvis has carved out his own kingdom within The Astral Plane - a realm of countless realities. However, as Galvis soon learned, “God” was a relative term, and the being he had slain was only one of several powerful entities that ruled over the realms of men. Galvis quickly realized that these beings were the only thing standing between him and total dominion over The Astral Plane and resolved himself to find and destroy each and every one of them. But that was eons ago and Galvis’s demonic spies have failed to find even a single one of these holy creatures. At this moment, the demon is out of patience and his hatred for all of creation is greater than ever before...

In Infinite Conquest, we are blending roguelike gameplay with the Action RPG genre. This new game mode allows you to experience a different procedurally generated world every time you play.

The Astral Plane is a realm of infinite realities. And, as the ultimate villain, Galvis seeks to conquer them all. Each world that you visit will have its own randomly generated set of dungeons, towns, caves and forests for you to explore and fight your way through. Gain tons of loot and craft insane weapons as you rise to the top of the online leader board and become the ultimate conqueror. When you take on Infinite Conquest, you can choose to keep your progress between worlds, or take on "hardcore" mode and face permanent death for the ultimate challenge.

Chaosoft Games is an independent game development studio based in Knoxville, TN. Chaosoft Games' title EvilQuest was launched on Xbox Live Indie Games in 2012 released on Steam in 2014. The team is currently working on the follow up title EvilQuest 2 and plans to release it in the near future on a variety of platforms. Currently the team consists of one developer, two artists and one composer. For more information, please check us out here Chaosoftgames.com

Thanks for voting and helping EvilQuest 2 on it's quest to become the 2021 Indie of the Year. You are now in with a chance to score some free games. Help this game secure more votes by embedding the widget (or link) we have included below on your favorite sites.

The epic quest of universal domination continues! EvilQuest 2 is the exciting sequel to the hit Action RPG that offers players the chance to play as the ultimate villain rather than the tired and repetitive role of “world saving” hero.

Getting through the Greenlight process ensures that the game will be available on Steam as soon as it is completed and ready for release.So visit the Greenlight page on Steam now to learn more details and don't forget to vote!

Kage: Rise of the Tengu Adventure