It's just another day at the office...
You and your partner-in-crime just robbed a bank, everything went smoothly, very smoothly...
Until suddenly your moron of a partner decided to steal your part and leave you behind to fend for yourself!
OH NO no no no no, you won't be a robbed thief today! So, you steal a cab like in a classic hollywood-thief-like-scene and chase him!
Drive fast through narrow roads, avoid obstacles, jump broken roads, speed boost with turbo, dodge the cops that are behind you and try to escape from police helicopters, all to recover your not-so-well-earned money!


So far, Escape Fast! has +35.000 downloads in the Windows Store and is currently available as a trial app
You can find the Windows Phone version in the following link 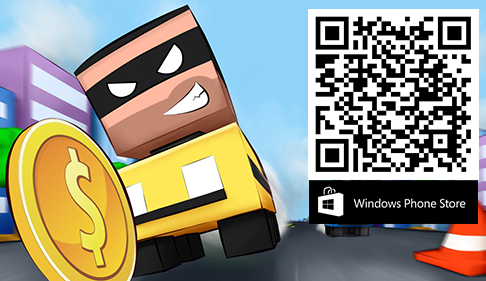 Escape Fast! is going to be featured in the Windows Phone Store on February 10, 2015.

Escape Fast is now available on the Google Play Store!!

Escape Fast! Available on the AppStore