DungeonQuest is a multiplayer platformer-RPG. 2-4 players cooperate in local multiplayer to explore dungeons and defeat enemies, gathering loot and leveling up.

Post news RSS Bloodhunt - Beyond the Lockpicking Mini-Game of Skyrim

Bloodhunt now has a Lockpicking mini-game, with lockpicks a screwdiver and dice rolls. Can you ask for more?

Posted by EmanuelMontero on May 4th, 2014

Some months ago I wrote a post about how I envisioned lockpicking in Bloodhunt. My original intention back then was to capture the pure essence of extended actions in Vampire: the Masquerade instead of just throwing a boring and unintuitive lockpicking system. Somewhere in between, however, I thought it would be great to add a simple lockpicking mini-game to spice things up a little bit. Of course, at first I was very influenced by the lockpicking mini-game of Skyrim. Now let's see how it's all coming together.

Let's face the facts. Lockpicking in Bloodlines is not well implemented. I don't know what's going on. I can only wait for the "lockpicking" bar to fill up. Boring. 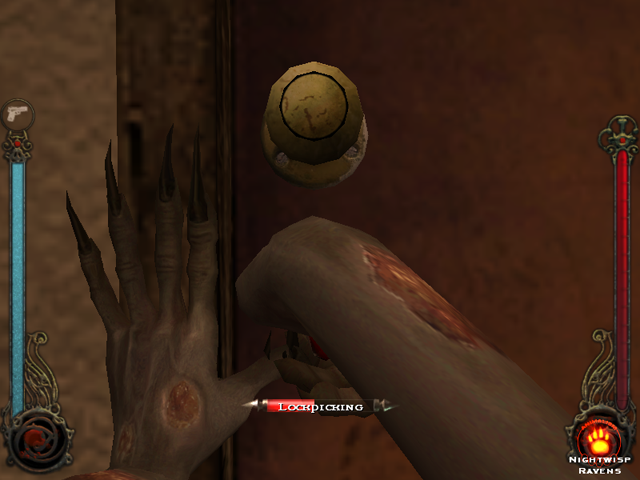 On the other hand, Skyrim does a great job with the lockpicking mini-game. I have a limited amount of lockpicks. Each lock requires careful attention. I can move my controller left or right, while it rumbles to indicate if I'm near the soft spot of the lock, the precise point where I can easily open it. If I try to open the lock in the hard spots, I can break the lockpick by force. This mini-game is fun and rewarding though it has some minor drawbacks:

The lockpicking mini-game in Bloodhunt uses two tools: a screwdiver and a lockpick. Each tools is controlled moving the mouse in a different axis. Moving horizontally rotates your lockpick, and moving vertically moves up and down your screwdiver. Since both movements are controlled with the mouse, you have to concentrate on each axis separately which is kinda tricky. You can find a soft spot in the lock with each tool, which will give you a bonus in the Lockpicking roll, but you can't break your lockpicks with the mini-game. So if you're not skilled with the mouse, you still have lots of chances of succeeding. For now, each tool offers a simple bonus to the dice roll of -1, 0 or +1 depending if you're in the hard, normal or easy zones of the lock. The lockpick grants you a bonus to the number of dice in the lockpicking roll, while the screwdiver grants you a bonus to the difficulty. This means that if your lockpick is on the easy zone you get a +1 to the number of dice, and if your screwdiver is the hard zone you get a +1 to difficulty. Of course, I'll add different types of tools that will add +2, +3, etc. Some will be breakable like the lockpicks, and some will not (like the screwdiver).
Here's a GIF of the lockpicking mini-game at work.

Still there's a lot of work and fine-tuning to do with the lockpicking mini-game, like adding different lock sounds to each zone, showing your lockpicks on-screen, reseting the zones after each roll, etc. But for a first attempt, I think it's pretty fun to play.