Dominions: Priests Prophets & Pretenders is a turn based fantasy game in which you take the role of a pretending god. Each pretender is Lord and Master of one of fourteen cultures, each with its own individual strengths and weaknesses. With the aid of soldiers and mages you will conquer the lands of your neighbors in a struggle for total domination. This is an old game and it is now available again for those who wants some Dominions nostalgia or maybe just want to show their support for Illwinter Game Design. If you haven't played any Dominions game previously you should start with Dominions 3 as it's a lot better. (Go to Dominions 3 to find a forum where you can discuss this game and get technical support) 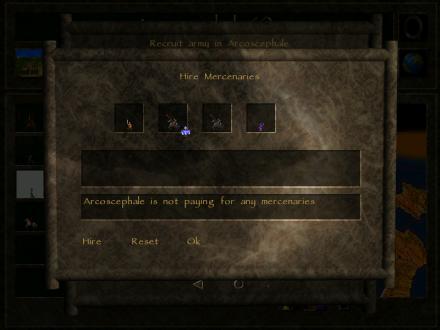 Mercenaries are hired on a global market. If one player puts a higher bid than another player then the highest bidder is most likely to get them. Of course the mercenaries can change loyalties if the other player increases his bid later.

Most Mercenaries can only be recruited on land, but there are some amphibian mercenaries too. These can be recruited in underwater provinces as well as on land. These are often feared by underwater nations as they provide an easy way for enemies to attack their sea provinces.