Play through a game world as it is being thrown together in real time by a talent-less hack of a developer. Can you reach the castle? Does it matter? What's with video games and castles anyway? Does anyone read these the details section anyway? Currently in Alpha or something. I don't know. Still adding to it until people finally get invested in it when I can finally disappear without a trace or a final update.

At the time that I’m writing this, I’ve been working on Development Hell for almost a year. A lot of the original concepts have changed and an enormous amount of content and effort I have put in just won’t be in the final game at all. This is a small dive into all the work that went into the various versions of a very small part of the game, Path_2. 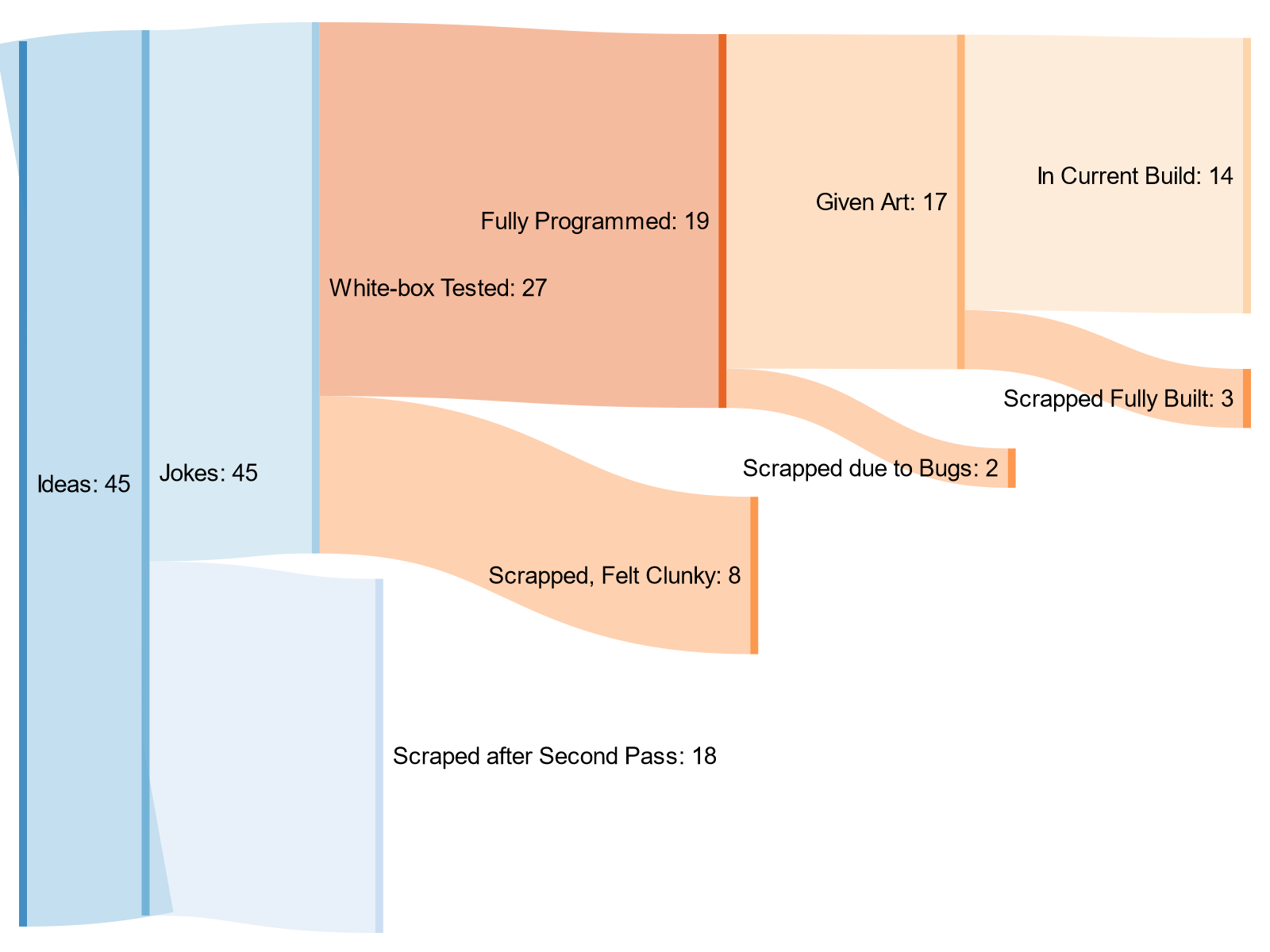 The numbers here are a little rough. Like I said, I have been fiddling with this game for around a year and an enormous amount of my notes have been lost, thrown away, deleted, or burned. There are tens and tens and possibly hundreds of small, dumb ideas that i scribbled on a post-it or receipt and lost before I even got to give it a second look, but this is the data I was able to pull from my existing notes.

My process for adding anything in the game was a five part process:

The second path is, or was, relatively simple. The developer talks about making twisting paths rather than straight A to B lines to slow down the player and get more play time without adding more content. The original path was about 30 meters long, and had two small curves that barely went four meters off the straight line. At this point, there was no original art.

By the second build, I had added the “Stealth Area” to make the winding path a little more interesting. This area has some old school DOOM mechanics of finding different colored keys for different doors, and camera evasion like any good stealth game. The original version was three rooms, one door, and only about three cameras, which could all be navigated in about four seconds. It was so bland that I might have been better off just leaving it out.

I devoted a whole update just to making this area less boring. Around a month of extra development poured into just this small portion of this one path. It got its own simple cast of characters, unique animations, props, loads of new art, and lots of extra, small jokes tucked in various corners. It grew from one floor to two, and three rooms to around six. Not a huge change, but it was very different to play.

On the last update, the winding path itself finally got switched out. I built paths about eight times the size of the original curves and themed them to look like crudely drawn back alleys since the stealth area was built to look like a factory. The alleys got their own skins, some extra props, and feature the only enemies currently in the game, simple NPCs that will swing a bat at you if you get too close. During this development cycle, most of the stealth area and winding path got reskinned again and the whole area got filled with the free floating developer notes that I call “scribbles” in the game. Just the scribbles again took an extra six hours or so of timing to make sure they would come into existence at the right time for players to actually notice them, or at least have a chance.

This is probably fairly vague, but hopefully it gives you at least a small idea of all the work poured into the game just by examining this one small piece.

Thanks for reading. Check out the game.

A quick rundown on the state of the game and fixes

Quick update on some changes with the most recent Development Hell upload.

A quick run down of some of the changes in Development Hell as well as an update on the in game scavenger hunt.

Just a quick write up introducing my game and giving a summary of where I am in development.