Ancient horrors have descended on the dark, cursed land of South Glenn. The Emperor has sent one man to investigate: Grey, a skilled swordsman with a blood-stained past. Mutated creatures and tragic victims of the spreading blight stand in the way of a twisted plot that threatens the entire world… can Grey find the root of evil and help the people of this land?

As Grey, your journey will lead you through tombs and catacombs, castles and caves on a quest to destroy the source of all this chaos - the truth of which will shock the empire!

The gameplay is as challenging as they come with no levels or power-ups, just your own skill against legions of unique enemies. Can you find the cause of the curse that ravages the land?

Enemies of all types and fighting styles run through the dark passageways, and they have a wide range of different attacks and defenses to keep even the most skilled player on their toes.

You are not alone! Not only are there strange creatures and tough enemies throughout the corridors and ruins, but a handful of helpful characters that can aid Grey along his journey. Some will illuminate the story, others help out with your exploration.

Vanquish over 25 unique enemies including 14 brutal bosses to save South Glenn from an evil ruler and other much darker ancient evils!

The levels and layout of the game is built with pathways that the player can chose, each affecting the final story. Many of the bosses and enemies in the game will take more than one playthrough to appear and offer a huge amount of re-play potential. Add this with a multitude of secret passageways, hidden story beats, and you’ve got a game with loads of content!

Thanks for voting and helping Deadly Edge on it's quest to become the 2021 Indie of the Year. You are now in with a chance to score some free games. Help this game secure more votes by embedding the widget (or link) we have included below on your favorite sites. 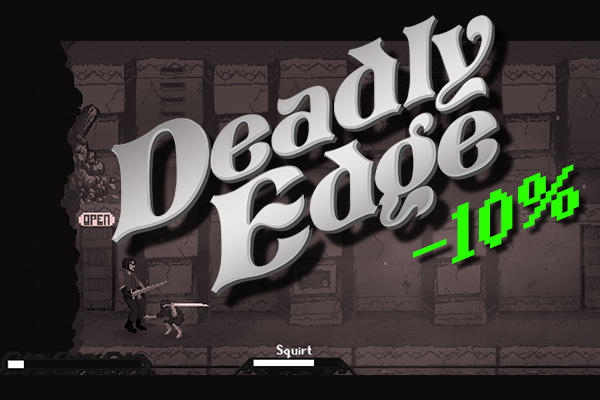 Man, it's been a crazy week, month, two years. Deadly Edge started as a game jam that we shared up here and other sites under our old studio name, Minion Studios.

The decision to make it into a niche retro pixel action game and release it for money was challenging and we'll see if it pays off.

I'd like to thank all the help we got - from Unity solutions to art direction - from the community here and hope we can help contribute more in the future!

Yeah! Our old school action pixel game is gonna be available Friday! It's been a hell of a ride, thanks to all the folks at indiedb and moddb for the...

Deadly Edge Has Been Greenlit!

Deadly Edge has been Greenlit on Steam thanks to your support!