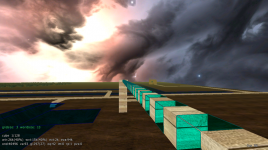 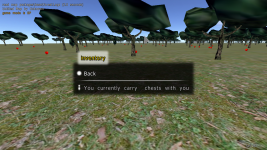 This is a free game that is made to be fun and enjoyable for most ages.
HomePage Forum Wiki PAS Download Links SVN

Introductory Values
Hello once again, it's been a very long time since I updated you guys on the goings on of Delta Studios and Reactor 17. Well, it's high-time I actually did something around here and I thought it was appropriate that I update you on the most important matters first. Those being that Reactor 17 is not a dead project, however Delta Studios is.

Wait, Delta Studios is Dead?
Yeah, Delta Studios is dead. But for a reason! Lately, I've been working with a new team. Dubbed Project Rogue, by myself, and running under the name of Rogue Rage. Project Rogue still involves a lot of the original team, a lot meaning just myself... With a few new members thrown in, a few meaning about eight or nine members.

So, the new team means what, exactly?
Well, to answer that question, I'm not going to have to do a great deal. For starters, the new team now has a YouTube partnership, which means we're getting paid... Soon. Secondly, we're already in the process of designing our first team game, the second one will be Reactor 17. Although, I tend to end up multitasking and working on both at once. The new team may not be as talented in games design as I am, however their views on the RPG environment is pretty good, and this would aide me in developing Reactor 17 to be a more entertaining game.

So Reactor 17 is going to be an RPG?
Yes, and it was destined to become one from the very beginning. Although, the story may need re-inventing around the four new characters that will be introduced at a later date. We'll also be introducing the RPG crafting system and fusing the traditional RPG environment with that of a point-and-click adventure game, such as "The Secret of Monkey Island", "Myst" and "Shadowgate", and a First Person Shooter... Creating some monstrous hybrid FP-RP-PnC game... Hah, no. We'll just be making it a First Person Role-playing Adventure game, where exploration is key.

What now?
Now? We wait... Or, you wait. Whatever floats your boat.
I'll update you when I can, and I'll keep you posted on YouTube.

New news about the plot. Maybe one plot, maybe two!? There is news about both macs and linux releases.

Read for new info on Da Chest Collector Game. In this I thank Klymraid. I also tell about the new plot line.

This is the first mission to my game. Download the Platinum Arts Sandbox program and put the maps in the packages/base folder. Then play the house map.

This is the story line so far. I will update it as I type it up. The game release date has been pushed back. I'm sorry, but the game development is taking...

Hey Pizza! Are there any jobs open for map design?

I am Currently asking PizzaLover101 about the project.

I update on what he says.

Well ever since I left the team and KGstudios pulled out of the project nothing much has been going on with it infect the last svn upload was by me so I say no sorry guys I talk to pizzalover about it and see if we can get the game running again.

is the game dead?

Negative. This game is still being developed, although the majority of the team has decided to move to a seperate project until further notice. Although kggames has quit sandbox.

Leo i did not leave sandbox i had some Personal problems i back now.

Hello all i am exited to announce that the new DCCG site will be opened soon.

In the next few days you will see many updates to this old rust bucket and this old rust bucket will be your very own survival guide though the DCCG lands BUT there one catch the site will not be fully open unto February because of not enough Site designers we currently got over 6 sites in making and only 1 YES 1 person making them.

Thanks
Klimyriad
Owner of KG

Come on guys... Cut the crap and leave him alone. If you have a problem? Talk to me! Im the oldest in the group. I know PizzaLover101 is the leader, but I see myself as one too. I made the most commits to DCCG, I made changes that can be done... and to those who want to use Source SDK, UDK or Game Maker Pro 8... Go ahead, I doubt they have an RT Map editor like PAS, or C2. And I doubt they can be modded so easy.

Return of the Assholians from the Planet Ass Adventure